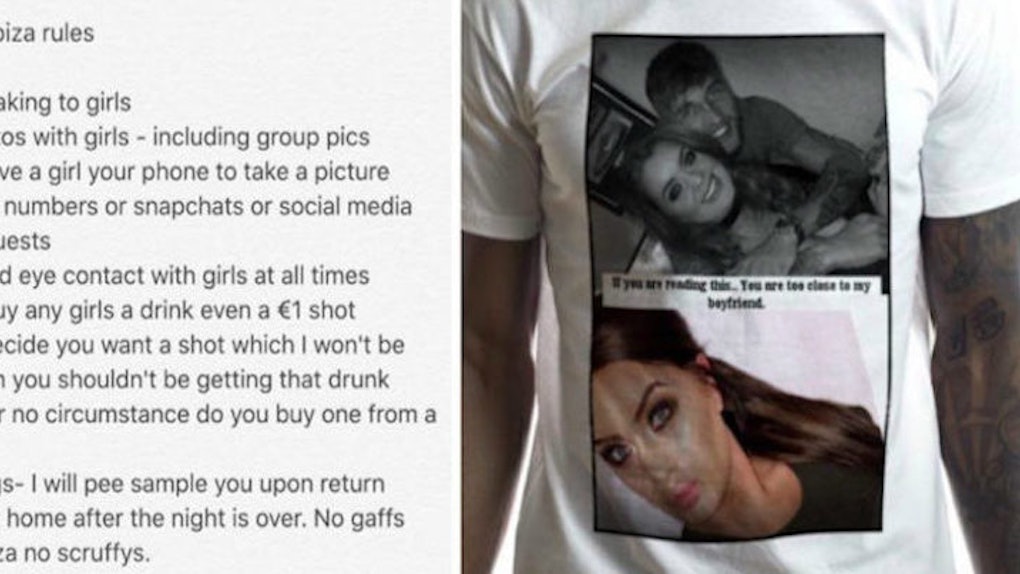 Girl Makes Boyfriend T-Shirt With Her Face Before Ibiza Trip

This is the dating equivalent of Martin Luther's "95 Theses."

In preparation for her boyfriend's trip to Ibiza, one girlfriend created a list of 20 rules for her BF to adhere to while he was with his guy friends -- and they are strict AF.

Seriously, I wouldn't be surprised if some of the laws she came up with were actually in effect in Puritanical New England at the tail end of the 17th century.

Jane Park of Edinburgh, 20, is the youngest lottery winner in Great Britain, having won £1 million back in 2012 (God, don't you miss the pre-Brexit days?).

And dating Jane comes with a price: unbending loyalty at all times.

Jane took to Facebook to make a very public decree to her boyfriend Connor George: Either he follows these 20 rules in Ibiza or there will be blood (metaphorically).

Jane is treating Connor like a convict out on parole, and I can respect that.

Although I think her concern over him getting a tattoo on his penis might be very misplaced.

Keeping an eye on his Snapchat score? I sincerely think that Jane has a future at MI6 based on her level of subterfuge.

Of course, the t-shirt she so lovingly designed for him has a huge warning for any ladies thinking of macking on him or even approaching within a distance of 25 feet...

Connor has already promised to faithfully wear the shirt. Although, I think the only way Connor could follow all of Jane's rules is if he stays inside all day and night.

Citations: Girl draws up extreme list of rules for boyfriend ahead of lads' holiday (Metro)