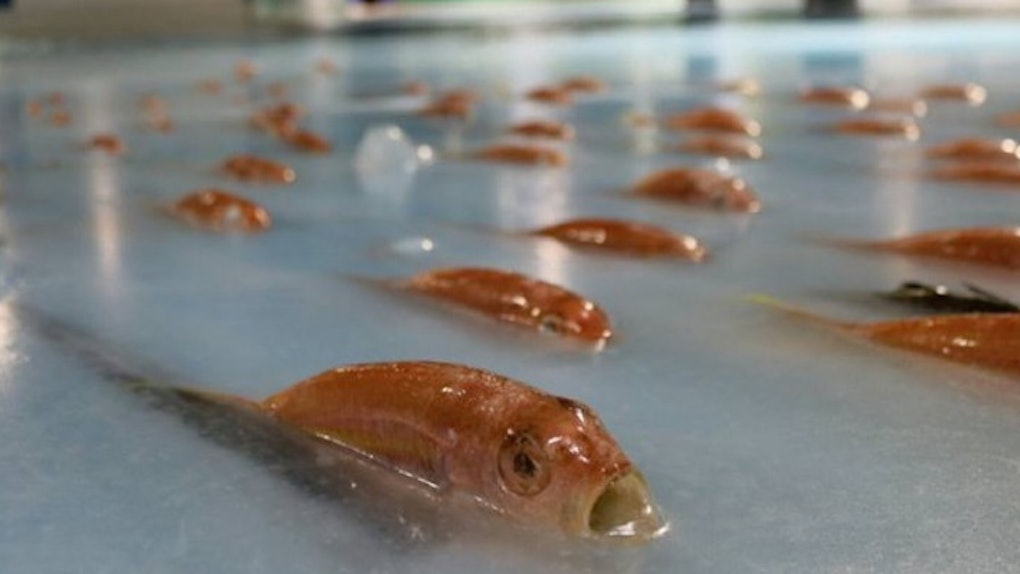 A theme park in Japan has been forced to close its ice rink after countless people complained over the 5,000 dead fish that have been frozen into it.

Some of the sea creatures at Space World, in Kitakyushu-shi, Fukuoka, spell out the word "hello."

Officials made the decision to close the attraction on Sunday after intense public backlash.

Many posted damning reviews on the theme park's Facebook page, branding staff "sick in the head."

While in this world with over-fishing, still, "Space World" freezes over 5,000 fish, and watches the poor fish freeze and die in the ice-cold water. This is animal abuse [...] You call this a business? I think not. Who wants to ice skate over thousands of dead lives of fish?

Sick in the head, why would you do that? Hope your business get shut down.

The theme park reportedly came under fire after posting pictures of the attraction with insensitive captions like "I am d... d... drowning, s ... s... suffocating."

They had hailed it as a world-first.

Toshimi Takeda, general manager of Space World, said the park did not mean to offend people. He said,

We were shocked to hear the reaction as the ice skate rink was very popular since it opened two weeks ago, we had an unprecedented number of visitors. We wanted customers to experience the feeling of skating on the sea, but after receiving criticism, we decided that we could not operate it any more. We are planning to hold a memorial service for the fish inviting a Shinto priest, which we'd planned before getting criticized.

He said the fish were bought at a local market and were dead before being frozen into the ice rink.

The attraction will be unfrozen so the fish can be removed, added Mr. Takeda.