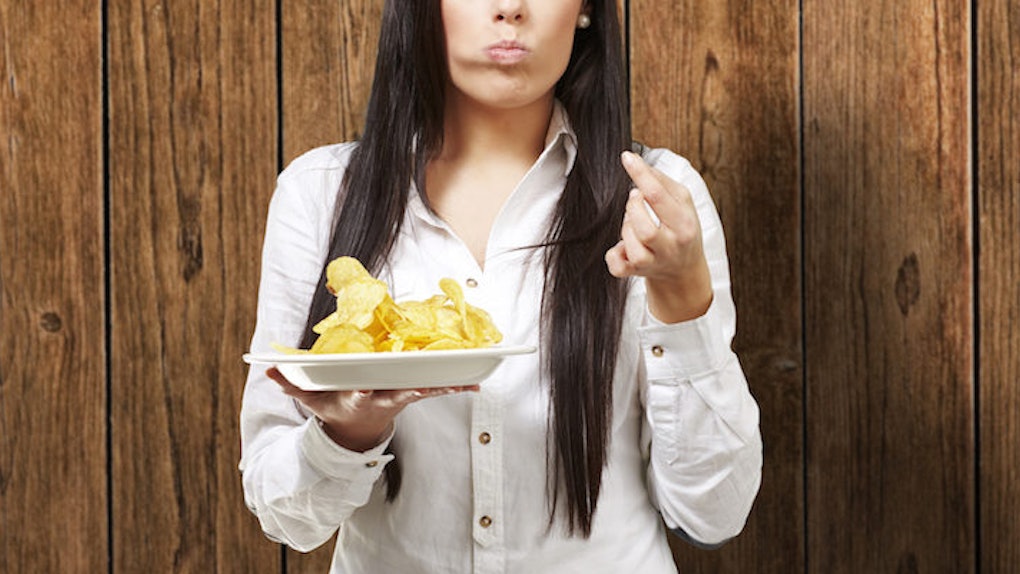 A 34-year-old British woman will be spending the next six months in jail for drunkenly stabbing her boyfriend as punishment for eating all her chips.

Yes, you read that correctly.

Dianne Margaret Clayton literally stabbed her boyfriend Simon Hill in the shoulder WITH A KNIFE for eating her chips.

And you thought you loved your drunk food.

Here's how it all went down.

The Daily Mail reports that Prosecutor Parveen Akhtar said the fight started when the couple went over to a friend's place "for drinks and homemade chips were cooked."

Simon Hill ate them all and that caused her to get angry. She was seen to slap him across the face before leaving the room. She picked up a knife in the kitchen and then stabbed him, causing a superficial injury.

It's like, you think you can trust someone, and BOOM, you find out he's been eating all the chips at the party behind your back the whole time?!

Such betrayal. Such heartbreak.

The couple eventually left the party but Hill returned to his friends' place for his own safety.

Public Defender Richard Prew explained Clayton could barely remember the incident because she was so hammered. Prew continued, "She has some injuries herself which she can't explain." Been there, girlfriend.

He goes on to inform us that the couple had no incidents of domestic violence before this incident.

MetroUK reports that "the 34-year-old admitted the assault and was jailed for 26 weeks at Blackburn Magistrates' Court yesterday."

At the end of the day, I really want to know more about this "homemade chips" situation.

First of all, what is this group of friends that gets drunk and makes homemade chips so delicious, they're worth stabbing someone for, and how can I sign up?

Second, how were these chips divvied up? Did this guy just eat, like, all the chips at the entire party? Or did he steal her share? OR did she expect him to give her his share??

THESE are the questions that need answering as far as I'm concerned.

Citations: Girlfriend stabbed lover because he ate all her chips (MetroUK), Hungry girlfriend, 34, who drunkenly stabbed her lover with a knife in front of friends after he scoffed all her CHIPS is jailed for six months (Daily Mail)