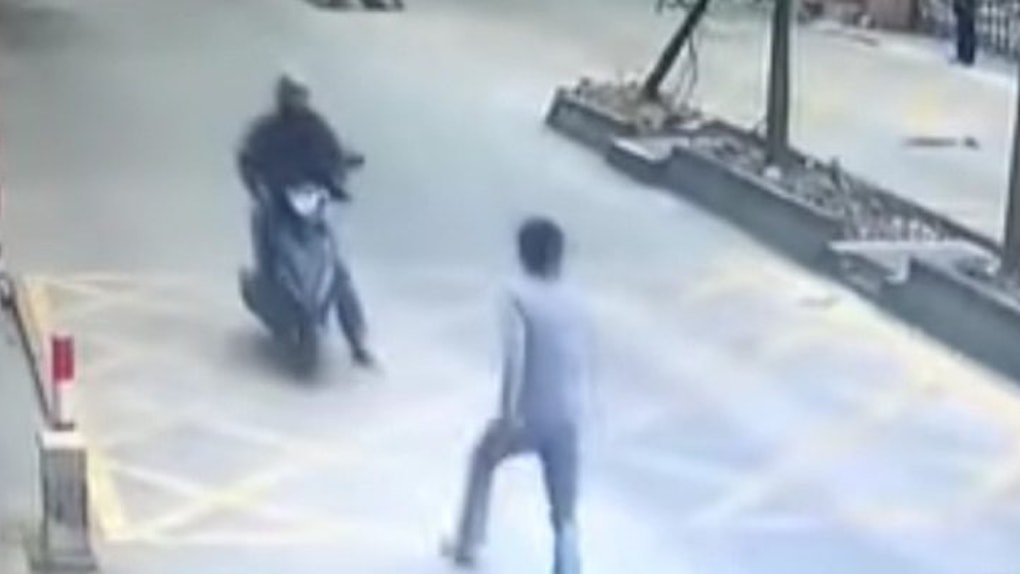 A phone thief in China recently got a taste of Kung Fu karma after he messed with the wrong truck driver.

Fortunately for us, the entire badass incident, which occurred in Foshan town, Guangdong province, was caught on CCTV.

According to Mashable, the truck driver named Huo was waiting for a delivery when he heard a knock on the truck's window.

Huo called his boss to see if this was the person sent to deliver the goods when his phone was suddenly grabbed from his hand.

But this thief would soon learn he'd made a BIG mistake.

After taking the phone, the thief hopped on a bike and attempted to make his getaway.

But Huo wasn't having it. This was apparently the second time he'd lost the phone within two months. Hell hath no fury like a person who's tired of habitually losing his phone.

So, Huo hopped out of his truck as the bike made a U-turn, jumped in the air and kicked the thief off the bike.

It was EPIC. Huo is an absolute legend.

The thief, looking completely terrified, promptly handed the phone back to the truck driver he should've never crossed.

People in China are reportedly referring to Huo as a "Kung Fu master" and "Bruce Lee reborn," and it's not hard to see why.

Check out the full video of this incident. There's nothing quite like seeing a man kick another man off a moving motorbike.

It's a very "Grand Theft Auto"-esque moment, except totally real.

This all goes to show that you shouldn't start fights with strangers because you have no idea what they might be capable of. You might get Kung Fu kicked right in the face.

In fact, you probably just shouldn't start fights in general — and don't steal people's phones, either. It's really uncool. Just spread the love, my friends.