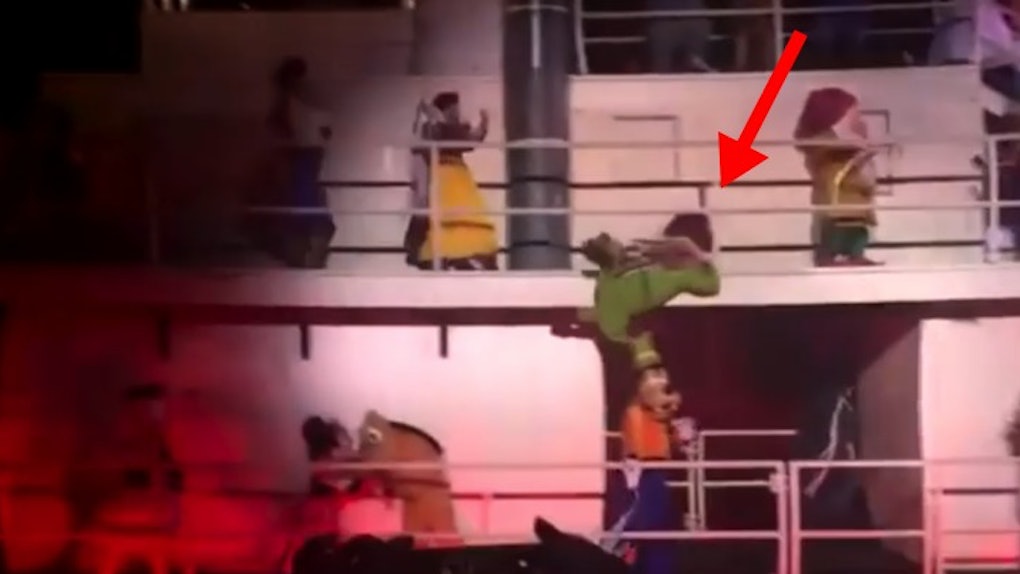 Dopey And Goofy Injured After Insane Fall At Disney World

This will be forever known as Walt Disney World's equivalent to the Zapruder film.

According to The Telegraph, 27 people fell out of cruise ships in 2015. Thankfully, zero of the seven dwarfs have been officially declared "overboard" in 2016 -- well, at least so far.

However, on Sunday night, Walt Disney World Resort's Hollywood Studios was the site of a scary workplace related accident involving a forest-dwelling miner and a dog. That's right, I'm talking about Dopey and Goofy.

The theme park's nightly show "Fantasmic!" features almost the entire pantheon of Disney characters on a boat float. If you're not thinking of Donald Duck squealing "I'm On A Boat" right now, then what are you doing with your life?

The video above captured by an onlooker shows Dopey taking a tumble between the railings. Fortunately, the clumsy character's fall was broken, and he escaped getting completely defenestrated from the boat.

Unfortunately, the fall was broken by another cast member dressed as Goofy. If I were Goofy at that moment, I'd totally scream "H'yuck my life!" That's how committed I'd be. Just sayin'.

Luckily, the friend of Snow White didn't suffer the same fate as French gymnast Samir Ait Said as both Dopey and Goofy were treated at the scene and then released, according to the Daily Mail.

Personally, I'm just glad that it seems the two won't be engaging in a civil lawsuit over this accident.

Citations: Watch out below! Dopey the Dwarf stumbles straight off Fantasmic float at Disney World - but his fall is broken by Goofy (Daily Mail)