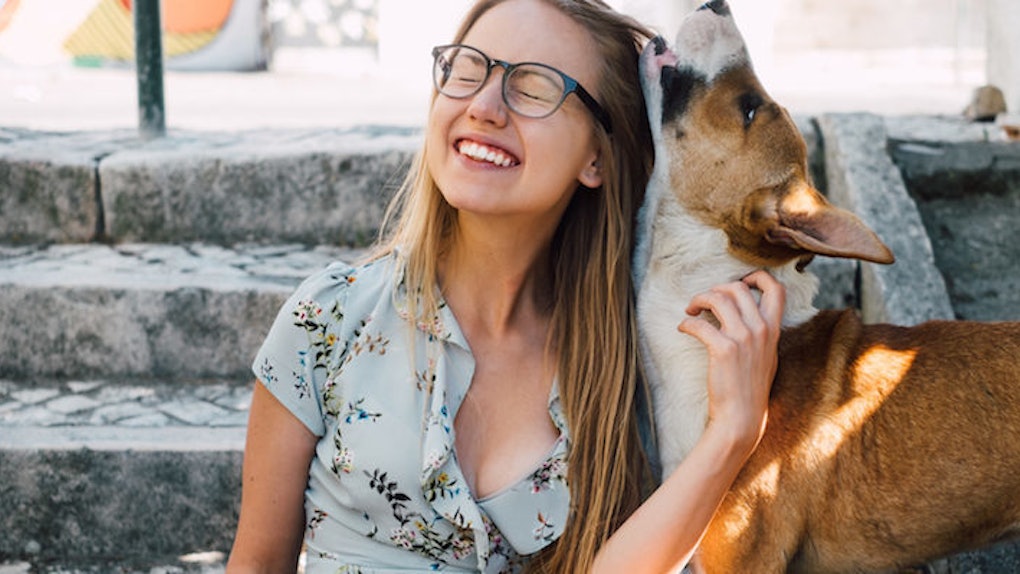 I like to think my little Yorkie can read my mind. If you own a dog, you probably believe that, too.

This notion stems from that moment every dog owner experiences, when you're listening to sad music, sobbing your eyes out and your dog runs over and nestles itself right next to you. Or when you're just really happy, and your dog starts jumping and twirling around with you like the little sidekick it is.

You don't know how they can tell what you need in that moment, but they just can.

New studies suggest that dogs know what their owners are feeling just by staring at their faces. Wow. What a time to be alive.

Dogs may be particularly skilled at reading human emotion but we, on the other hand, are the exact opposite when it comes to reading our furry friends' thoughts.

In the 1970s, the Facial Action Coding System was created to research all the different types of human expressions. And now Juliane Kaminski, researcher and senior lecturer at the University of Portsmouth, is trying to achieve the same thing with dogs.

The Dog Facial Action Coding System is a "scientific observational tool for identifying and coding facial movements in dogs." This is the perfect (read: most ~scientific~) way to find out what your dog is actually thinking.

Kaminski told Science of Us about using the system. She said,

As soon as we see there are certain facial movements that we always see in certain contexts, then we can say things like, it's probably because they're scared.

One study performed by Kaminski brings the DogFACS theory to life. The researchers filmed 27 dogs in a shelter and looked at how each dog communicated with some of the perspective dog buyers. What they noticed was that one facial expression, in particular, corresponded with the rate of adoption.

You probably guessed it: PUPPY EYES.

Apparently, dogs that lifted their eyebrows and batted their eyes were much more likely to find homes than dogs that didn't. If a dog made puppy eyes more than 15 times in a two-minute interaction, the dog would probably only spend 28 days in a shelter, the study said, while a dog who only made the expression five times was more likely to spend 50 days in the shelter.

A pup's eyebrows make it look more unhappy, which will motivate a dog lover to bring it home and give it some necessary cuddle time.

In addition to the puppy-eyes look, researchers also studied the "guilty look" your dog makes when it's done something bad. This look could either mean your furry friend knows an action was bad, or it's in response to the owner's anger.

While dogs have perfected the mind-reading technique, people tend to decode their dog's emotions by human standards instead of the dog's, which is kind of a problem.

Children often go in to kiss dogs they think are "smiling" but, in reality, they're barring their teeth trying to let the kids know they're not in the mood to be touched.

Misreading a dog's facial expressions is common, but it's still important to look out for.

Thanks, science, for confirming that my dog is a mind-reading magical unicorn and I have no mind-reading talents whatsoever.