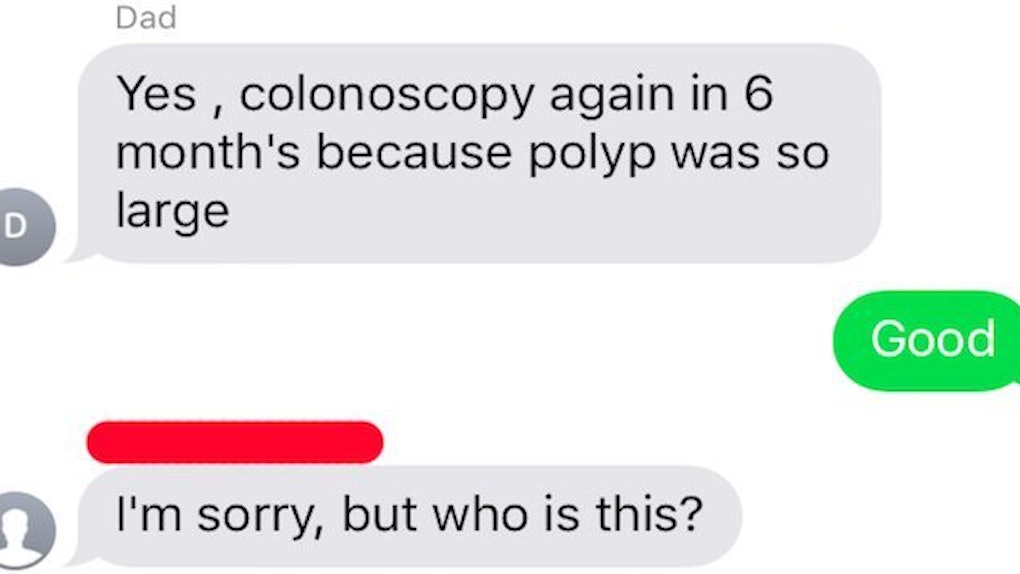 If there's one text message you don't want to send accidentally to your co-worker, it is the results of your colonoscopy.

At least, that's what this dad learned on Monday.

Fred (not his real name) had a routine colonoscopy done last week. During the procedure, doctors found a polyp that they wanted to test for cancer.

Luckily for Fred, the polyp was benign.

After getting his results back, Fred texted the good news to a group chat of his daughters and a person he thought was his girlfriend Heidi.

It turns out the Heidi that Fred texted was not his girlfriend. It was an old customer from work who was also named Heidi.

Still, the awkward conversation continued... and morphed into a business deal.

Poor Fred was so flustered he'd forgotten he already had Wrong Heidi's number.

Fred's two daughters, Rachel and Rebecca, were watching the whole thing unfold in this group message in real time.

I was so lost. I thought he typed in a random phone number by accident, so I separately texted Rebecca because I was so confused.

Rebecca felt equally as weird about the situation. She said,

At first, I saw the number, and I figured it was an aunt or uncle that I didn't have their number saved, so I didn't think anything of it. Once I realized what happened, I was mortified for him, but couldn't stop laughing at the same time. I had to explain to one of my co-workers why I was laughing, which made another awkward situation.

It was clear Fred found the whole thing hilarious, but he was obviously pretty embarrassed, too.

I had to know if the business deal was really happening or if it was just discussed to make things less uncomfortable. Fred was confident it was real.

The business deal? Oh yeah. We're gonna meet in the city next week and talk about me taking on that line. From butts to towels. Who would have thought?

Something tells me this family will be laughing at this story for years to come.