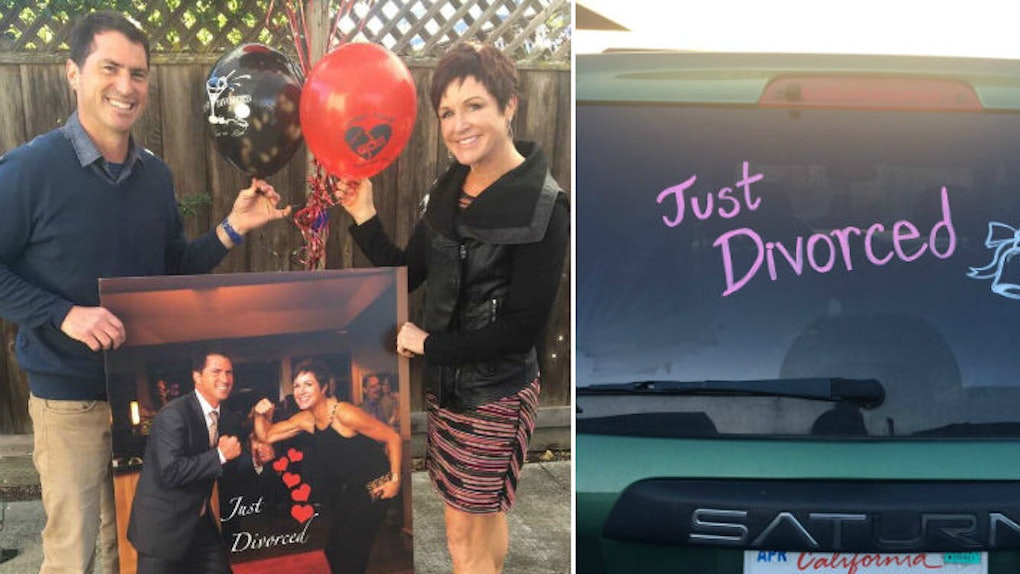 This Couple Threw A 'Just Divorced' Party With Champagne

Jeff Becerra and Michelle Mahoney had been married for 24 years when they decided it was time to call it quits.

Instead of the plot of "Kramer versus Kramer" ensuing, the two decided to show there were no hard feelings between them to their two daughters Rylie, 20, and Emma, 18, family and friends.

On Saturday, the new exes finalized their divorce and instead of drowning their sorrows and drunkenly making a scene at a Walmart (something I would probably do), they threw a joint celebration together.

In fact, Emma helped them plan the event that took over two months of preparation.

It's not hard to see why -- the whole event was decked the fuck out. Seriously, just look at all this booze.

Forget relationship goals. Honestly, these two are ex goals. I mean, if all breakups had a party at the end, I don't think it'd be so difficult to say, "sit down, we need to have a talk about us..."

The day after the party, the two exes shared a private moment together, splitting the remaining champagne still around from the gathering. Jeff even gifted Michelle a toaster.

Michelle called it a "silver lining," according to BuzzFeed.

Michelle spoke to BuzzFeed about the reason for throwing the party, saying,

We wanted to divide what we had built together fairly and to keep family first. We felt that we did that and we felt that was a reason to celebrate.

You got that right, Michelle. I don't think I've ever seen exes who were so chill with each other, let alone ones that decided to treat the split like it was a goddamn quinceañera.

I wish this former husband and wife pair all the best in finding new love out there. If anything, they have a great a story to tell on their first dates.