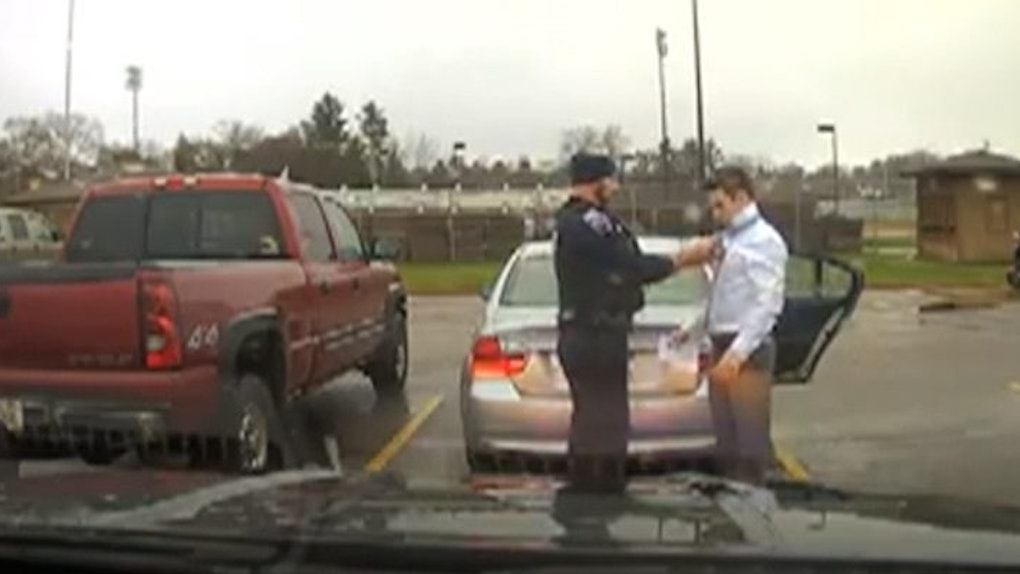 Delivering a class presentation can be pretty nerve-racking.

Therefore, you can only imagine how stressed out one University of Wisconsin-Stout student must have been when he was pulled over for speeding to school on the day of his presentation.

Apparently, Officer Martin Folczyk of the Menomonie Police Department turned on his flashers and signaled the student's BMW to pull over after he saw the car speeding down 8th Street on the morning of November 30.

If being stopped when you're already late to class isn't bad enough, this student was also having a serious wardrobe malfunction.

When the cop, Officer Folczyk, walked up to the car, the student jumped out of the passenger's seat and told the officer,

I have to get a tie tied. I have a presentation and I thought my buddy was home but he's not, and I'm running behind.

The fact that this kid didn't know how to turn a tie into a presentation-worthy knot clearly hit a soft spot with Officer Folczyk because he told the student to hand over his license, his proof of insurance and his undone tie.

While the student ran over to the car to grab his license and insurance card, the hero police officer saved the day by loosely knotting the tie around his own neck before handing the finished product back to the nervous student.

While I do this, why don't you grab your proof of insurance and your driver's license real quick. Probably not the best knot, but it will work.

Beggars can't be choosers, especially when you're tieless and late for a class presentation, so the student thanked Officer Folczyk and told him his knot was "better than what I was going to do."

The cop also decided to cut the kid a little slack for speeding to his class and let the student off easy with a verbal warning.

While there's no word yet on whether this kid managed to get an A on his presentation, the police chief got word of this comical traffic stop and invited the student down to the station in order to teach him how to tie his own tie.

If you ask me, this is one police officer who definitely deserves a gold star.