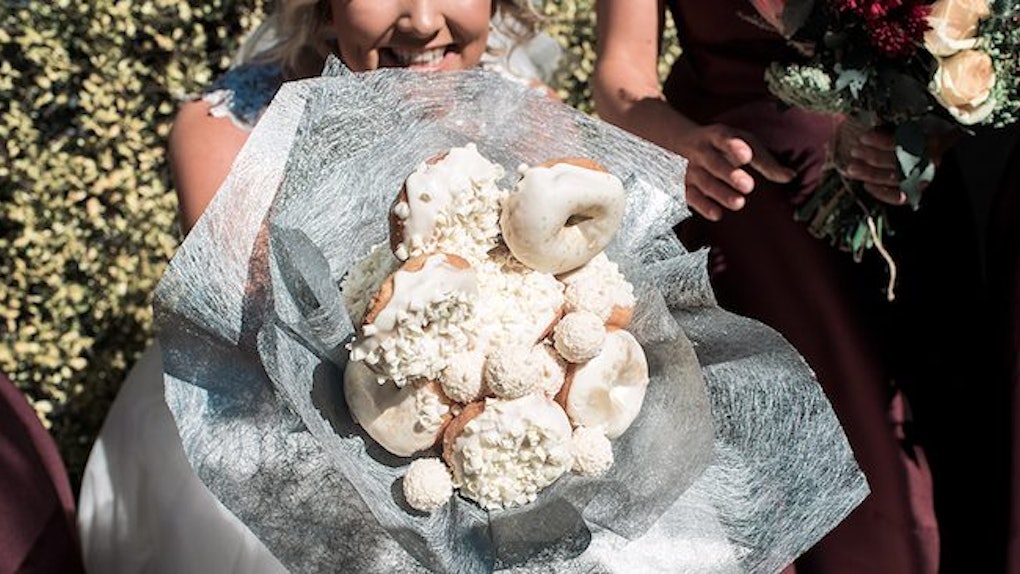 If you were to say that wedding cake is the number one reason to attend a wedding, I would immediately concur. Most couples go all-out with the celebratory confections, but a pastry shop in Australia is now taking it to the next level by bringing in the sweets before the pair even exchanges "I dos." One awesome bride and her bridesmaids helped usher in the future of wedding ceremonies when they walked down the aisle accessorized with donut bouquets.

The contest was put on by Dessert Boxes, an Australian dessert company. Dessert Boxes opened on Feb. 14 of this year because, as they tell Elite Daily, "We launched on Valentine's Day because we wanted to say NO to boring gifts!" Sounds like they couldn't handle even one more heart-shaped box of chocolates accompanied by a dozen red roses. The company decided to provide something a little different. They tell Elite Daily, "We launched our donut bouquets because you can't eat flowers!" Makes perfectly delicious sense.

The next move was to make the day of one lucky bride, and that's when Dessert Boxes came up with a contest for brides to win donut bouquets for the big day. To enter, applicants had to send an email about the wedding, and then Dessert Boxes narrowed it down to ceremonies taking place in Sydney. Soon after that, they spoke to the eventual winner, Paige Kirk. The company tells Elite Daily,

When we spoke to Paige, we knew she was our winner! She was so fun and light hearted, and we knew she'd rock the bouquets as she walked down the aisle! Plus, she wanted to keep it as a surprise for her bridesmaids, which we thought was priceless!

So, Paige was chosen as the winner of the breakfast pastry bouquets, and she was finally able to reap the sweet reward at her wedding on Sept. 9 in Rydal, New South Wales. The outdoor wedding was beautifully picturesque as the ceremony took place just past Australia's iconic Blue Mountains, but I'm sure Kirk's wedding pictures will stand apart from the rest because she and her bridesmaids are rocking the coveted donut bouquets in all the pics.

The bouquets consisted of both full-sized donuts and donut holes, and they were all decorated in the perfect wedding white. One of the reasons Dessert Boxes chose Kirk as the winning bride was that she was planning to keep the donut a bouquets a surprise for her bridesmaids. Kirk's sneaky move paid off because Dessert Boxes tells Elite Daily that she told them,

My bridal party was so excited when they found out they were walking down the aisle with donuts. My husband and I wanted to have fun at our wedding and we figured, why not have donuts? EVERYONE loves donuts!

I like the way Kirk thinks -- if donut bouquets aren't fun, then I don't know what is. I like that she went all-in on the donut bouquets. These were not just tasty props for a few pictures. You guys, she walked down the aisle carrying the donut bouquet, and to further ensure that you're bookmarking her for your next #womancrushwednesday post, every single donut was still in tact when she made it to the end of the aisle -- those donut holes wouldn't have stood a chance if it were me.

I'm sure brides all across Sydney will think about canceling their florists after seeing Kirk make donut bouquets look chic AF.

Thankfully, Dessert Boxes is good for more than just weddings. You can order a donut bouquet or a box of donuts filled with other goodies to be delivered all across Sydney. According to their website, they're working on expanding their delivery service to other Australian states as well.

As for donut lovers in the U.S., you might just have to book a ticket down under -- destination wedding, anybody?