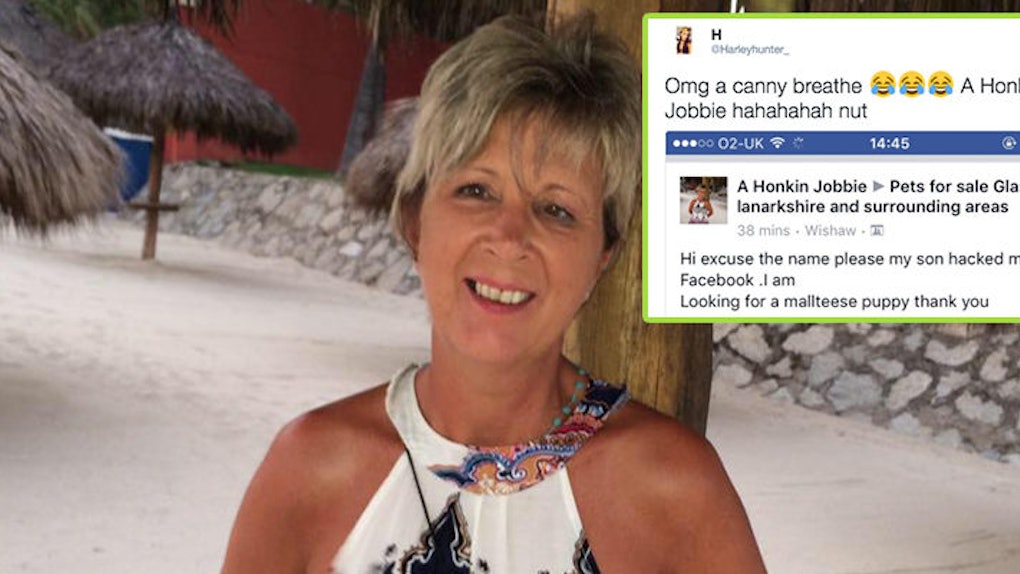 In 2012, I moved to Glasgow, Scotland for grad school. There, I quickly learned Scottish people speak an entirely different brand of English than Americans do... especially when it comes to slang.

One of the richest words in the lexicon of Scots is "jobbie," and a young man recently utilized it in a pretty epic and hilarious way via his mother's Facebook account.

He changed his mother's Facebook name to "A Honkin Jobby." We'll get to the meaning in a second, but just know it's not flattering.

If you're American, you're probably wondering what the hell this means and why it's so funny. Completely understandable.

So, yeah: This guy changed his mom's name to "a huge poo."

What a loving and dutiful son.

Hi excuse the name please my son hacked my Facebook. I am looking for a mallteese puppy. Thank you.

To top it all off, the mother won't be able to change the name for a few months. Facebook only allows you to change your name every 60 days.

Also, in case you don't understand the language this Twitter user used – she clearly found this hilarious – "a canny breathe" is Scottish for "I cannot breathe."

This is definitely a very immature brand of humor, but it's also quintessentially Scottish.

If you've never been to that part of the world, I highly recommend it.

The weather isn't always ideal, but the landscape is beautiful. The people are friendly (and hilarious), and the whisky is delicious. Not to mention the fact that now, you already know some of the local dialect.

The words "honkin" and "jobbie" should definitely come in handy for you.