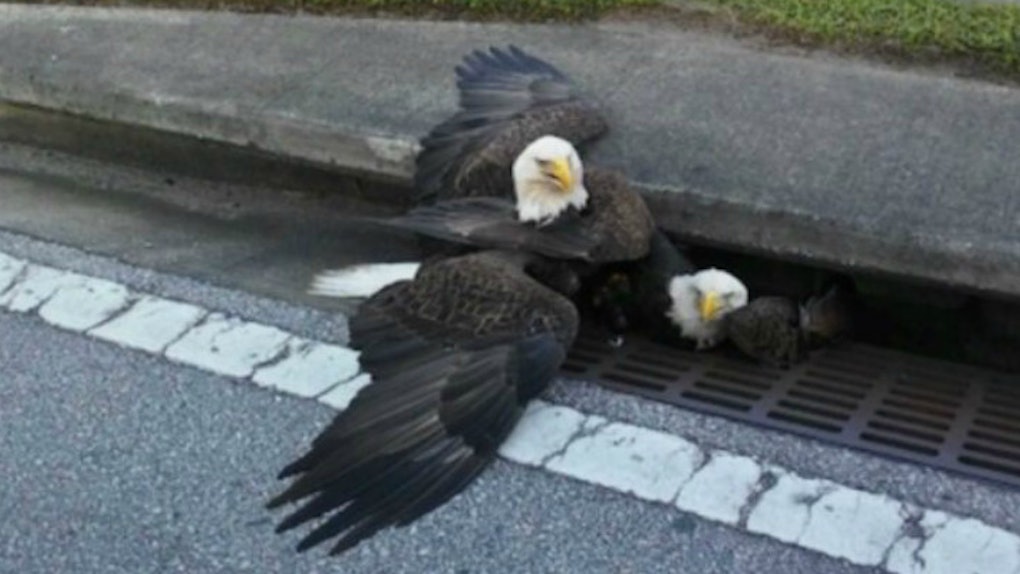 You know what's worse than a bald eagle, the very symbol of American strength, democracy and perseverance, getting stuck in a drain in Florida?

Two bald eagles getting stuck in a drain in Florida.

Thursday, while much of the nation was still mourning the election of Donald Trump as the 45th president of the United States, two bald eagles somehow got stuck in a gutter.

Obviously, everyone immediately saw them as a symbol of America going down the drain with Trump in charge.

The two bald eagles were stuck in a storm drain in Orange County, Florida, because clearly the lord hates this screwed up state more than anyone.

It didn't take long for emergency personnel to arrive on scene and attempt to rescue the birds, but their mission initially went about as well as this past Tuesday night.

Yeah, one of the eagles was able to break free, but the other eagle fell right down the drain... JUST LIKE AMERICA PROBABLY WILL WITH TRUMP AS PRESIDENT.

Eventually, the eagle was pulled out of the drain by a rescue team, with onlookers hooting and hollering in celebration.

According to the CNN video clip above, this was actually a fight between the two bald eagles over territory. You can hear the eagle rescue expert say,

Now, if we want to take the symbolism a step further, we could say the two eagles represented democrats and republicans, with the bird that fell in the sewer obviously being a democrat.

In any event, the last thing we needed was to see the purest symbol of American strength and freedom get stuck and fall into a damn storm drain.

Trump's America is real, people, and we need to start planning for it.

Citations: This Is The Wrong Time For Two Bald Eagles To Be Stuck In A Drain In Florida (Barstool Sports)