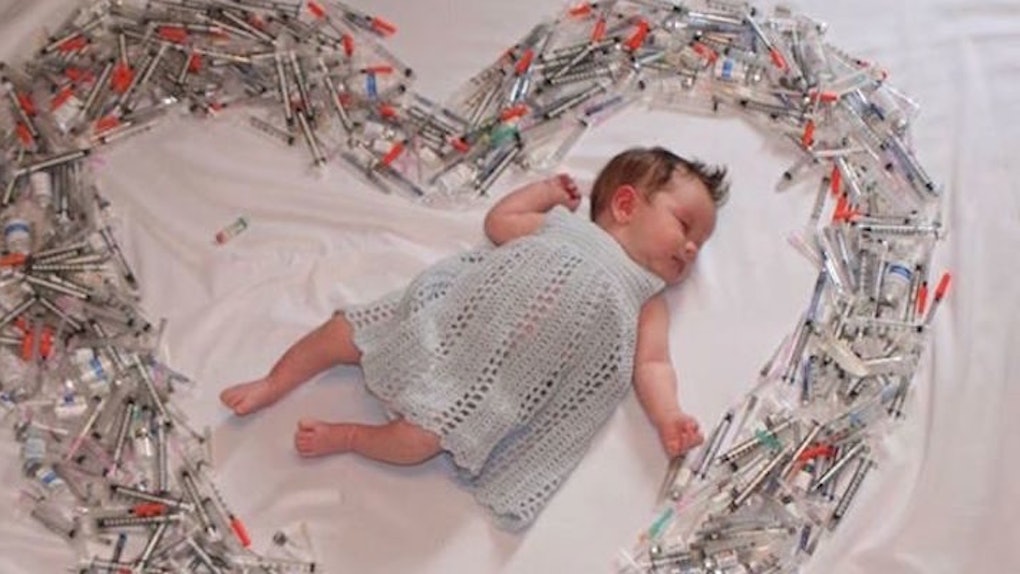 Fertility isn't something many young women talk about, but perhaps that should change. And perhaps, this photo of an angelic baby surrounded by the syringes used for in vitro fertilization, will do the trick.

Wow, what a photo. Thank you to Sher Fertility St. Louis and Dr. Dayal patient Angela, who shows the true definition of love that went into making this gorgeous new baby girl. Posted by Sher Institutes on Monday, October 5, 2015

The photo, posted to Facebook by the Sher Fertility Institute, was reportedly sent to the company by a very proud new mother who happens to be one of its patients.

Lisa Stark, director of communications for Sher Fertility Institute, told USA TODAY, the Institute was not trying to get any particular message across, but rather, to:

Encourage a culture of openness and elevating the dialogue around infertility ... We felt like it was a provocative, emotional photo that captures the joy and pain of IVF. We are overwhelmed by the response pouring in from women who can relate to the photo.

According to the Society for Assisted Reproductive Technology, 61,740 babies were born as a result of IVF efforts in 2012. In fact, the report shows, more people are using IVF to start their families than ever before, despite its hefty price tag.

As CNN reports, the average cost of just one IVF treatment in the US averages $12,400, even without the extra medication some couples may need.

Under the photo one commenter wrote,

Didn't even tell my husband what this was, I just handed him my phone. I saw tears form in his eyes as he probably also went through the memories of countless nights, over our four year journey, that he gave me shots. We finally were successful with twin boys and I've never been happier!

Been there, injected that ... For those of you that are still in the trenches fighting the war, my heart goes out to you.

Citations: The Powerful Reason Why This Baby Is Surrounded by Syringes (Cosmopolitan)