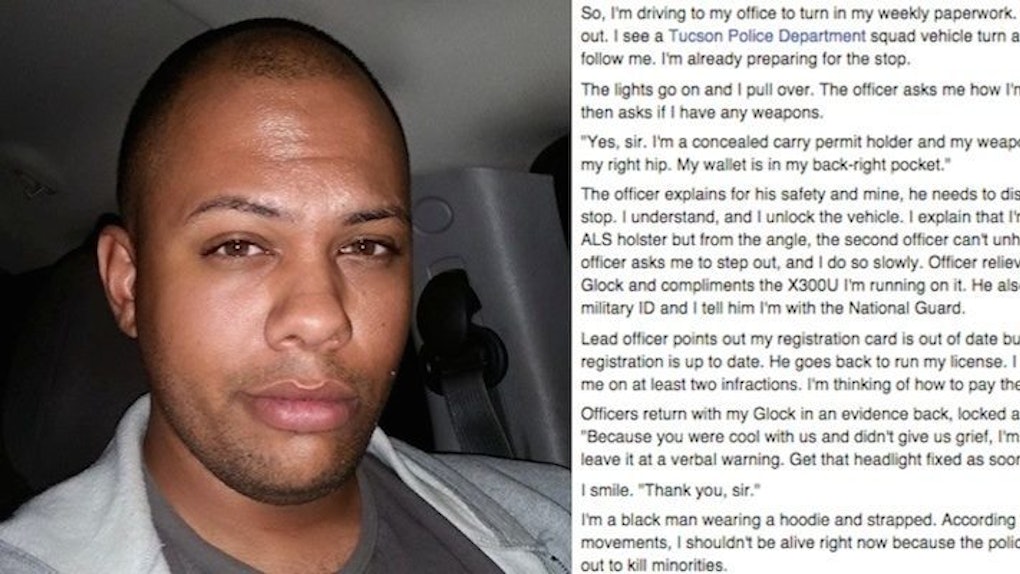 An Arizona man's online post about his peaceful run-in with the cops is going viral on Facebook.

Steven Hildreth, Jr claims he was calm and forthcoming when Tucson police pulled him over for a broken headlight.

He was open about how he was carrying a weapon and how he had a permit. To reach his wallet, he allowed the two police officers to calmly remove his gun from him for their safety and his.

He claims the situation didn't escalate because of this willingness to cooperate with police.

Steven told the full story in a post on Facebook that since gained more than half a million likes and over 264,000 shares.

So, I'm driving to my office to turn in my weekly paperwork. A headlight is out. I see a Tucson Police Department squad... Posted by Steven Hildreth, Jr. on Tuesday, October 27, 2015

In the post, Hildreth explained how he was pulled over for a broken headlight and immediately told the cops he was armed and had a permit. After the cops went through the non-violent procedural motions, they checked all of Hildreth's information and handed back his firearm.

Hildreth said one of the officers told him,

Because you were cool with us and didn't give us grief, I'm just going to leave it at a verbal warning. Get that headlight fixed as soon as possible.

Hildreth went on to add,

I'm a black man wearing a hoodie and strapped. According to certain social movements, I shouldn't be alive right now because the police are allegedly out to kill minorities. Maybe... just maybe... that notion is bunk. Maybe if you treat police officers with respect, they will do the same to you.

Police officers are people, too. By far and large, most are good people and they're not out to get you. I'd like to thank those two officers and [the Tuscon Police Department] in general for another professional contact. We talk so much about the bad apples who shouldn't be wearing a badge. I'd like to spread the word about an example of men who earned their badges and exemplify what that badge stands for. #BlueLivesMatter #AllLivesMatter