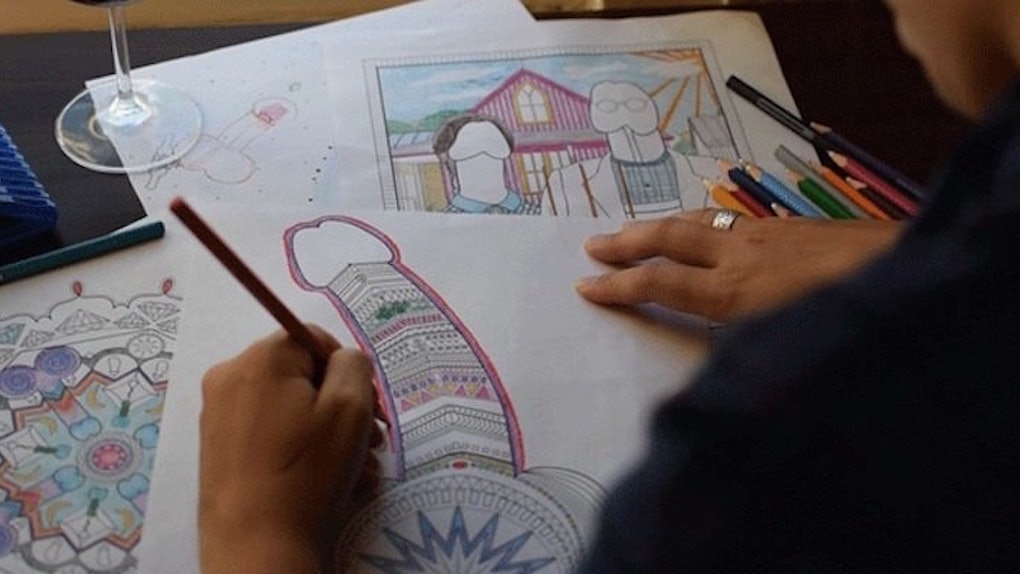 *Immature dudes who have to take their laptops to the Apple store because they spit up diet Mountain Dew on their computer keyboards after they watched a video where some kid accidentally kicked his father in the genitals.

At some point in your life, you are callously told you've aged out of coloring books.

It's a harsh lesson, but an important one as it is probably one of the first times in your existence you are expected to grow up a little. Unless you watch your grandmother die right in front of you during Thanksgiving dinner when you were like 6. In that case you probably grew up RUL fast whether you wanted to or not.

It's an unfair part of life, but thanks to a group of brave pioneers, this injustice may be coming to an end -- the coloring book thing, not the grandma thing. You can't unsee that, sorry.

Meet "PEN15 Club: Members Only Coloring Book," a coloring book named after a middle school joke I refuse to explain (one of those “if you have to ask, you'll never know” things) that focuses purely around penis art.

Before you judge it, look at these pics and tell me you don't want to color in deez D's.

According to a press release, the creators of the club decided to make the book simply because they rightfully thought penises were pretty funny, elaborating,

We're both lady architects who attended college together in New Orleans. We learned two things in school. One, that approximately 90 percent of buildings look like dicks, and that this is hilarious. Two, how to draw. We're big fans of the adult coloring phenomenon, but have been very disappointed in the quality of ADULT adult coloring books we've found. We wanted a great penis coloring book that's creative, intricate, and fun to color. What the world really needs is a beautifully ­crafted piece of literary art that is also full of dicks. So we decided to erect it ourselves, and create the PEN15 Club : Members Only Coloring Book.

Are you a bit of an art fan? Might I suggest adding your own personal touch to an American Class(d)ic?

If you want to get in on the REVOLUTION, you should consider donating to The PEN15 Club's Indiegogo, which already raised over $2,000 and comes with a ton of ROCK-HARD perks.

Aside from the fact this is literally just a book where you color in outlines of penises, the cool thing about the PEN15 Club is excess proceeds go to SIECUS, a group devoted toward promoting comprehensive sexual education in schools to "to create a world that ensures social justice and sexual rights."

Unleash your inner child and join the PEN15 Club! (Not toooo young of an inner-child, though. That'd be weird.)