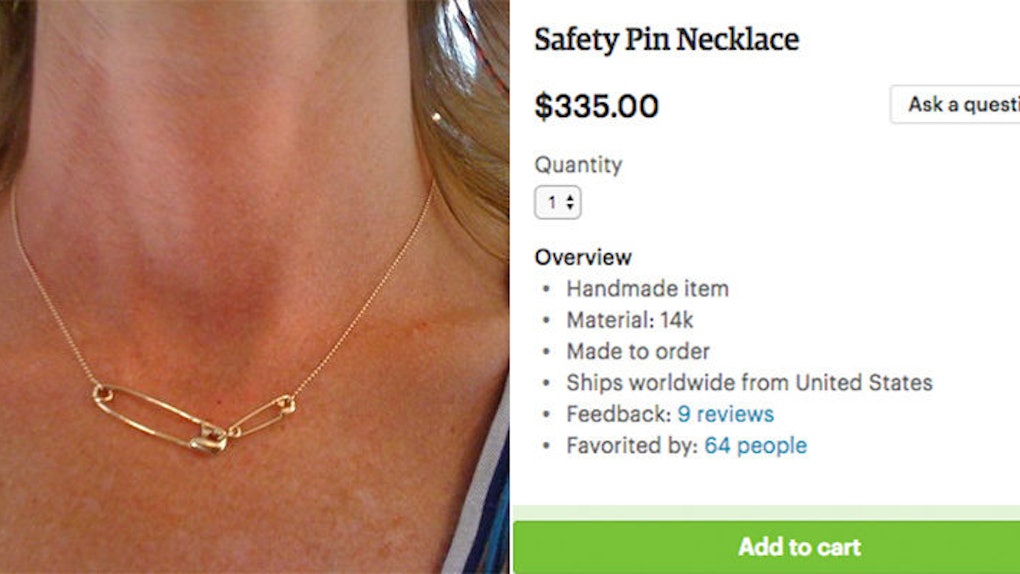 However, not all Trump protesters are marching through the streets with signs.

That's right. Some people are taking a more subtle approach to their political opposition by rocking safety pin necklaces.

Apparently, the practice of wearing safety pins originated in the UK during the whole Brexit debacle and is a symbol that's intended to show solidarity with victims of racism.

However, it seems one crafty woman is now trying to capitalize off this meaningful symbol.

That's right. Jewelry designer Rebecca Cullen is selling a $335 safety pin necklace on Etsy that lets you show your support against homophobia, racism, xenophobia and sexism.

You're probably wondering how on Earth you can justify selling a safety pin for over $300.

Well, according to Cullen's Etsy ad,

This dynamic piece features two solid 14k safety pins (they don't actually open) linked in the front. Worn right at the collarbone, this is something you will put on and never want to take off. The delicate ball chain is also 14k.

As you can imagine, the Twitterverse has not taken kindly to Cullen's unnecessarily expensive necklace, even if the thing is made of gold.

Now, a lot of Twitter users are attacking Cullen and basically showing no mercy.

Many people are saying that it is pretty outrageous someone would try to profit off an anti-racist symbol.

While others simply couldn't believe that this necklace wasn't some kind of distasteful joke.

Others pointed out that there's much better things to spend $300 on than a necklace...

...and those looking to show their support should just buy a normal safety pin and donate the rest of the money toward a worthy cause.

Cullen responded to her haters, saying that her necklace is not a new design...

...but that didn't stop people from continuing to post mean comments and poke fun at her necklace.