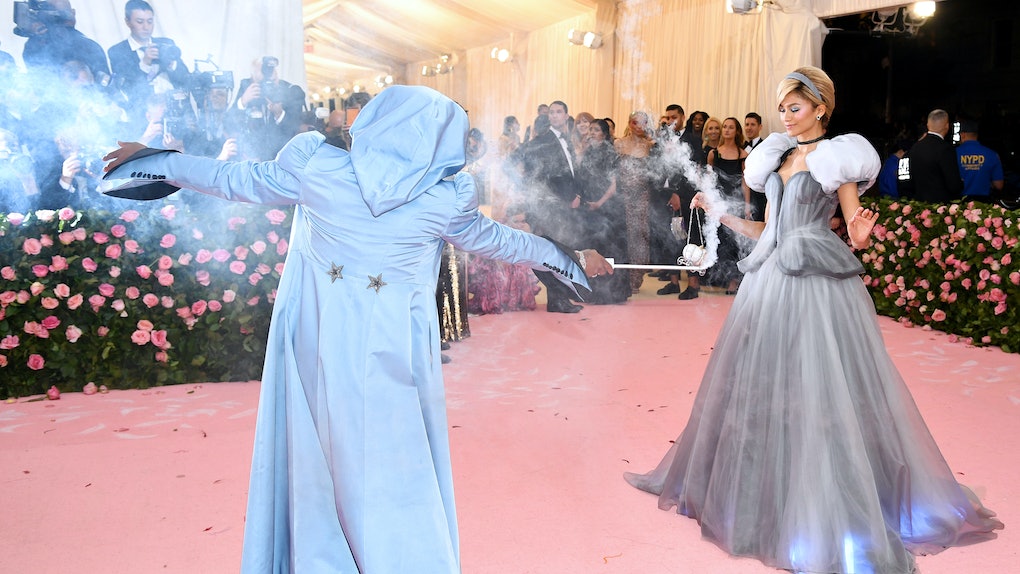 For her fifth-ever Met Gala, actress and singer Zendaya certainly did not disappoint when it came to her ensemble. Perfectly embodying this year's Met Gala theme, "Camp: Notes on Fashion," Zendaya's 2019 Met Gala look was stunningly jaw-dropping, mind-bogglingly extra, and, to but it bluntly, camp as ever. But honestly, the 2019 theme was no match for Zendaya, who has a history of absolutely nailing her Met Gala look every damn year.

For the Met Gala ceremonies that Zendaya has attended in the past, the actress has certainly always stuck with the theme in a pretty eclectic, but perfectly on-point way. I mean, take the 2018 Met Gala, for which the theme was "Heavenly Bodies: Fashion & The Catholic Imagination." Zendaya graced — or should I say, stormed — the red carpet in an armor-esque gown resembling Joan of Arc. She even completely changed up her hair look, rocking a chin-length red bob with cropped bangs. For the 2017 Met Gala, themed "Rei Kawakubo/Comme des Garcons: Art Of The In-Between," Zendaya stunned in an equally over-the-top yet totally different look. With a brushed-out halo of hair, Zendaya wore a bright, summery ball gown with flowers and macaws printed on the dress.

Needless to say, Zendaya is no stranger to a killer Met Gala lewk. And with this year's camp theme, I fully expected Zendaya to take that theme and run with it. As a surprise to no one, Zendaya exceeded all expectations.

In the past, we've seen the Spiderman: Homecoming star don custom-made dresses by designers like Fausto Puglisi, Michael Kors, Dolce & Gabbana, and Versace. This year's look is just as beautiful but even more extra. Zendaya wore a light blue Cinderella-esque dress by Tommy Hilfiger that is fit for a princess, or should I say fit for Queen Zendaya.

And while the dress and Zendaya's look in general is very closely inspired by Disney Princess Cinderella, it does so in the most over-the-top way as the dress lights up. Yep, you read that correctly. Zendaya's dress features blue lights throughout the bodice and skirt of the dress that lit up when her trusted stylist Law Roach walked by her side and waved his wand to turn the dress' lights on. Bippity boppity boo your girl lit up the pink carpet of the Met Gala.

To go along with her Cinderella-inspired look, Zendaya carried a sparkly purse that is shaped and looks exactly like Cinderella's pumpkin carriage.

As I mentioned, for each Met Gala that she has attended thus far, Zendaya has managed to fully embrace each year's theme, even down to her beauty look and hairstyle. This year is no exception. Zendaya's beauty look was just as lit as her dress.

For starters, celebrity hair stylist Ursula Stephen used Tangle Teezer's Ultimate Detangler Brush and Thick & Curly Brush in addition to Tresemme products on Zendaya's natural hair that was swept underneath a blonde wig. The wig was styled to mirror Cindrella's signature look: a deep side part with the hair pulled back into a low bun, and finished off with a light blue headband.

As far as her beauty beat went, Zendaya went with a blue eyeshadow, rosy pink cheeks, and a pink glossy lip.

Zendaya, never one to shy away from a theme, looked extra campy and royal in her Met Gala look that quite literally lit up the night.