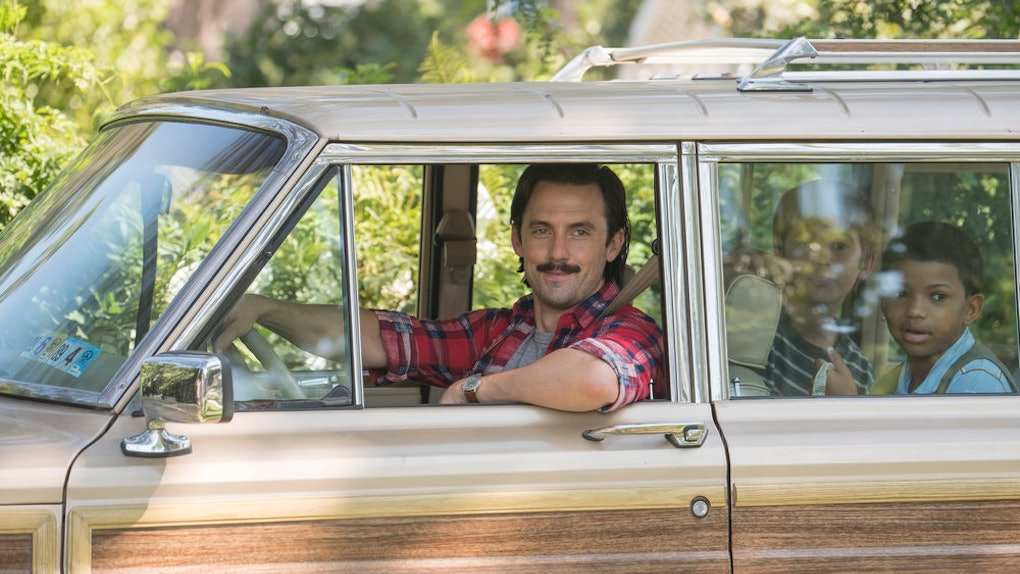 We're used to squeeing over adorable young actors as all three of the triplets appear over the course of the different flashbacks and various time periods. We've seen very young Kate, Randall, and Kevin, preteen Kate, Kevin, and Randall and teenage Kate, Kevin, and Randall. But we've never seen their father at any of those ages. We've never seen his childhood at all.

The internet was really taken aback when the kid first appeared in the car with his father riding out to the camping ground with a huge tin of worms.

But that was only the beginning.

Pulling Jack's memories of being taken out by his dad, even if he won't allow himself to consciously remember them, is part of what's driving the trip with Kevin and Randall. Going camping is supposed to be a growing up experience, a bonding time, a way to make a family stronger.

Except it isn't. And Jack knows it isn't. Because his memories tell him it isn't. He's trying to change that, by forcing the boys to go camping, by making them bond. Because when he was taken camping...

That was Jack's experience as a child. A trip camping was sitting in the car, watching through the window chanting to himself "He's coming back" while he watched his father put down beer after beer at a gas station.

But Jack changed the story. He stayed with the boys. He attended to them, and he waited, and finally Kevin and Randall found common ground, and they spent the night howling at the moon.

All of this plays out also, not just against the camping trip, but the vision of Jack's father, dying alone in a nursing home (from cirrhosis of the liver, naturally). We assume Jack's mother must have passed years ago, or if not she, like Jack walked out of the picture years ago, leaving the old man flat.

The saying goes, "As you sew, so you may reap." And Jack's father is reaping a bitter harvest for the crime of his alcoholism, and the way he treated his son all those years ago. Dying alone is every human's greatest fear, and if Jack had his way, that's what would come true for his father.

I guess we'll have to wait to find out, won't we?