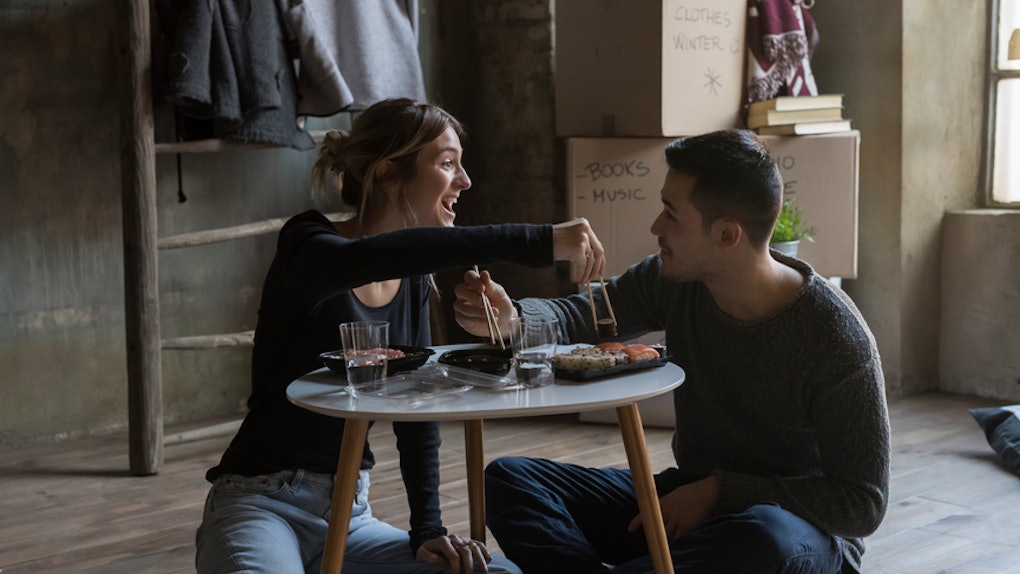 You've likely heard about couples saving money by living together, but just how much cash are they really saving? Sure, splitting the rent is nice, but you can do that with any roommate. When it comes down to it, the biggest perk of co-habitating with your romantic partner is probably the amount you end up saving on groceries, toiletries, and other necessities. Plus there's the obvious upside of living with someone you love. That way when their habits start to annoy you, you can kiss and make up — a problem-solving tactic you probably wouldn't want to try with that random roommate you found on Craigslist.

Of course, the cost of living varies widely depending on the part of the country in which you reside, whether you live in a more rural or populated area, and if you choose to live in a major city versus outside of it. For example, a one-bedroom apartment in Los Angeles has a median rent of $1,350, according to the March 2018 National Apartment List Rent Report. A one-bedroom apartment in New York City, on the other hand, averages $2,060 per month. I talked to four different women in four different U.S. cities about how they manage their shared finances, and how much they really save each month by splitting basic costs with their significant others.

The details: Gas and heat are included.

How they stack up: According to Apartment List, as of March 2018, the median rent for a one-bedroom apartment in Chicago is $1,070.

We live by the idea that everything will even out in the end, so if I get groceries one week, he’ll get them the next. While he was looking for a job, he’d pay for more of the groceries since I was helping out on rent. We have an understanding that I’m making more than him for right now, but that doesn’t mean I need to be footing the bill for everything. We try to be really open about when we feel uncomfortable about our spending and who’s paying for what. We also try to balance other things with spending, like he took care of our dog while I was out of town, so I want to pay for lunch as a thank you. I’m definitely saving money by living with my boyfriend. We’re able to have a better apartment in an amazing neighborhood of Chicago by combining our income, and spend less than if I was in a studio or had roommates. When I lived by myself I ate out more often and more of my food went bad, so I’m saving money and wasting less in that sense as well.

The details: Heat and electric are not included.

How they stack up: According to Apartment List, as of March 2018, the median rent for a one-bedroom apartment in Cambridge is $1,770.

I probably spend around $1,000 a month on my apartment and utilities. The amount I pay now is essentially the same as what I paid previously when I was subletting a room in an apartment in Brookline. My boyfriend is paying slightly more now than he was before. We pay $900 each for rent, and we split the other costs evenly. Sometimes he buys groceries and sometimes I buy them, or we'll split the total at the store. That averages out to about $400 a month total, so $200 each. I moved in with my boyfriend so I would be able to see him more than I was able to before, but also because it is cost efficient. At this point in my life, though, I feel like I would only want to live with him, alone, or with a very close friend.

The details: Heat, electric, and two parking spaces are included.

How they stack up: According to Rent Hop, as of March 2018, the median rent for a one-bedroom apartment on Long Island is $1,550.

We split our expenses evenly. We usually go to Costco together to buy food and I'll charge it on my card. We have a list on our fridge with designated columns for who purchased what, and then we divide it at the end of the month. I'm definitely saving money since my boyfriend moved into my apartment. My rent was $1,485 and I was paying for it myself. It's now $1,500 (a $15 increase for an extra parking spot), and we split it in half, so I'm now only responsible for $750. My boyfriend eats more than me, but when I lived alone I would go to Stop and Shop for smaller amounts of food. Now that the food gets eaten faster, I can go to Costco and I actually end up saving money. I would spend around $300 on groceries every month just for me, and now my half of the groceries comes out to about $200 or $250 each month.

The details: Utilities were not included, and came out to an extra $150-$200 per month.

How they stack up: According to Apartment List, as of March 2018, the median rent for a one-bedroom apartment in Fairfax is $1,810.

From the day we moved in together we treated everything as one big pot of money. So who ended up paying what month to month was random and just based on convenience, but all considered the same money. It would have been really awkward to try to fairly split things because when we were starting out, my then-boyfriend was making more than double what I made. And I think living together absolutely helped us save money, especially in terms of rent. I know a lot of people who pay over $1,000 a month for one bedroom in a multi-bedroom apartment, whereas we had a one bedroom apartment to ourselves for $1,700. So, we were each saving at least a couple hundred bucks a month.

After all these calculations, I'm left with only one question: Why am I still single?