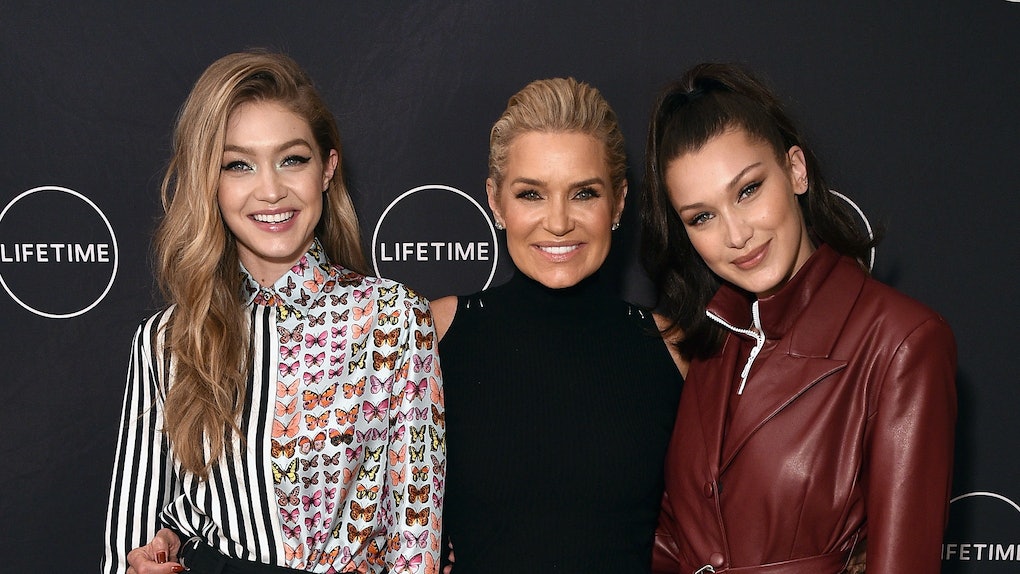 Yolanda Hadid has zero time for people thinking her daughters have had plastic surgery of any kind. The mother of three models (their brother, Anwar Hadid, is also a model) posted a body positive photo to her Instagram on Jan. 14 talking about how proud she was of herself for officially being totally free of fillers, Botox, and breast implants. A fan in the comments said something about her daughters that Hadid did not like, and Yolanda Hadid's response to rumors Gigi and Bella use fillers shut down that fan's comment real quick.

First of all, let's start off by saying there is nothing wrong with people using fillers, getting Botox, or getting breast implants if that's what a person decides will make them feel happy in their own skin. It's their prerogative. So no need to shame anyone who has had cosmetic procedures done. Yolanda Hadid's post about her own body explained that she felt the need to keep up with the impossible beauty standards women have had thrown at them for decades, so her choice to get the cosmetic procedures didn't come from a healthy place, according to her caption. Given that, it makes sense she would get defensive about the comment about her daughters.

Her Instagram on Jan. 14 shows her standing in front of a mirror and posing in pink lingerie. In the caption, she tells the story about her experiences with cosmetic procedures.

"Fifty Five and smiling from the inside out.... Finally back to the original 1964," she started off in the caption. "Living in a body free of breast implants, fillers, botox, extensions and all the bullsh*t I thought I needed in order to keep up with what society conditioned me to believe what a sexy woman should look like until the toxicity of it all almost killed me."

"Your health is your wealth so please make educated decisions, research the partial information you’re given by our broken system before putting anything foreign in your body," she went on. "It took me many years of undoing some bad choices I made for myself before I finally found the freedom to sustainable internal beauty and acceptance of what is the best version of myself by nobody’s standards but my own."

She closed the caption off by saying, "It’s on us to learn to love our selves and celebrate our unique, one of a kind beauty at all ages as we move through this journey called 'life'. Beauty has no meaning without your health." It's a positive message she's sending, no doubt. A fan had a bone to pick with it though, as they apparently believe that Gigi and Bella Hadid use fillers/other cosmetic procedures.

“I agree with you but what about your daughters?" an Instagram user commented on the post. "Especially Bella. She is beautiful but must use fillers?! And she is in the business so how do you rationalize that?”

Hadid commented back, “None of my children have [ever] done fillers or Botox or put anything foreign in their bodies. They know better after seeing what I went through.”

Bella Hadid commented on the rumors that she has had work done on her face in an interview with InStyle in May 2018. She denied the rumors in her comments.

"People think I got all this surgery or did this or that," she said, "And you know what? We can do a scan of my face, darling."

Honestly, even if Gigi, Bella, Anwar, and Yolanda all had some kind of cosmetic procedure done, it's no one's place to make them feel shame for that. They can do whatever they want with their own bodies, so props to Yolanda Hadid for doing what she felt was best for hers.

More like this
Big Hit's Response To Rumors BTS' 2021 Comeback Is In May Is Making ARMYs Suspicious
By Michele Mendez
Lizzo's TikTok About DMing Chris Evans On Instagram Is Truly Hilarious
By Abby Monteil
Why Did Addison Rae Deactivate Her Twitter? Fans Think This Is The Reason
By Brandy Robidoux
Stay up to date