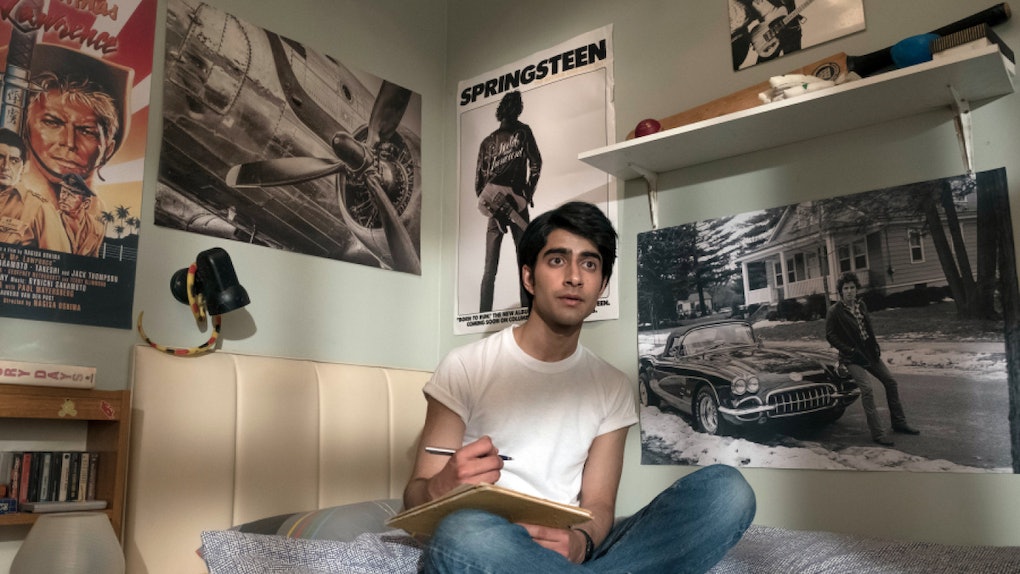 Yes, 'Blinded By The Light' Is A Bruce Springsteen Movie, But It's So Much More Than That– EXCLUSIVE

"If dreams came true, oh wouldn't that be nice." Bruce Springsteen's 1978 lyric quickly resonated with Blinded By The Light's protagonist. Javed Khan (Viveik Kalra), a teenage Pakistani Muslim living in Luton, England, in the late '80s, becomes transfixed on The Boss. Springsteen's lyrics hit home for the aspiring writer, serving as a soundtrack to his inner-most feelings and prompting him to confront his fears. Transcending location and time, Springsteen's songs charge the film, but it's a bigger message that takes center stage. As director Gurinder Chadha explains, yes, Blinded By The Light is a Bruce Springsteen movie, but it's so much more than that; it's about wanting a better world.

Blinded By The Light takes the universal themes of Springsteen's music — a prisoner of his hometown, the son of a disapproving father, a dream chaser — and weaves them into Javed's specific story. The movie is based on the 2007 memoir Greetings From Bury Park: Race, Religion and Rock 'n' Roll by Sarfraz Manzoor, who is the film's co-writer and a bonafide Bruce superfan. The movie (enthusiastically) nods to the dedicated Springsteen fanbase, which Chadha is also a part of.

With excitement in her voice, Chadha details the first time she met Springsteen in 2010, saying, "[Manzoor and I] were on the red carpet, like proper fans [at the premiere of The Promise] and as Bruce came in, everyone was cheering. We got very excited, and then he barreled over to [Manzoor] — he recognized him from being in the front [of his concerts] for so many years, and hanging around hotels, and cars, and he walked over. And he said, 'Man, I read your book. It’s really beautiful.' And Sarf had a meltdown ... And I stood there and thought, 'This is it, I have three seconds to do a movie deal with Bruce Springsteen on the red carpet right now,' because his people were pushing him away. I just thought 'OK. Be cool, be professional.' And I just blurted it all out. 'Hi Bruce, I'm Gurinda Chadha. We really want to make a movie from this book but we need your support. Will you help us? We’re such big fans,' like very uncool. Bruce looked at us both and said, 'Sounds good' ... And that is literally what happened."

It's a nearly-impossible story to get your head around. "It's a good lesson in seizing the day," Chadha adds with a laugh.

When it came time to show Springsteen the film, she was understandably nervous. "At the end of the film, [Springsteen] was kind of quiet and all the managers were quiet ... So I went to the front to turn the lights on and leave, so he could talk to his people. But he got up and he put his arms around me and he gave me a big kiss and he said, 'Thank you for looking after me so beautifully, don’t change a thing.'"

It’s simple: You just want a better world, that’s all.

As I watched the film sitting next to my father, who has seen Springsteen in concert roughly 200 times (that's not a typo), I was taken aback by his emotional reaction. Yes, the film peels back the layers of a turbulent father-son relationship and uncovers harsh societal truths that are tough to watch on-screen, but his reaction was heavier than that.

"You know what, I suspected that Bruce fans would like it, because Bruce really liked the movie when I showed it to him; but what I’ve been really surprised by is the amount of reactions from all over the world of guys crying in the movie," Chadha says. "Someone wrote to me on Twitter, a guy who said, 'I've just come out of your movie and I can’t stop crying and I don’t know why.' And I wrote back and said, 'It’s simple: You just want a better world, that’s all.'"

Happy that this article is for Elite Daily's millennial audience, Chadha continues, "[In] the world that we’re living in today, there is a lot of pain [over] people trying to make people not get along, a lot of division ... But then there are a lot of young people who are trying to say, 'No, I don’t want that world, we want something different.' I think what this film does is articulate that alternative way of being. It’s the antidote to what’s going on in the moment in the world."

Javed feels confined in a hate-filled world, but he finds his way out through music. Springsteen's music ignites the film's message, but it's the spark, not the fire (you can't have one without the other). The story has a powerful burn that hits audiences hard. From the hardcore Springsteen fans to anyone looking for their places in the world, the movie's message is bigger than a teen from England or New Jersey.

More like this
What Do BTS' "Film Out" Lyrics Mean In English? They're About A Past Relationship
By Michele Mendez
The Best Movie Soundtracks Were So Good, They'll Live On Forever
By Brandy Robidoux
Here's How To Stream BTS' 2021 'Bang Bang Con' So You Don't Miss The Concert
By Cianna Garrison
Stay up to date