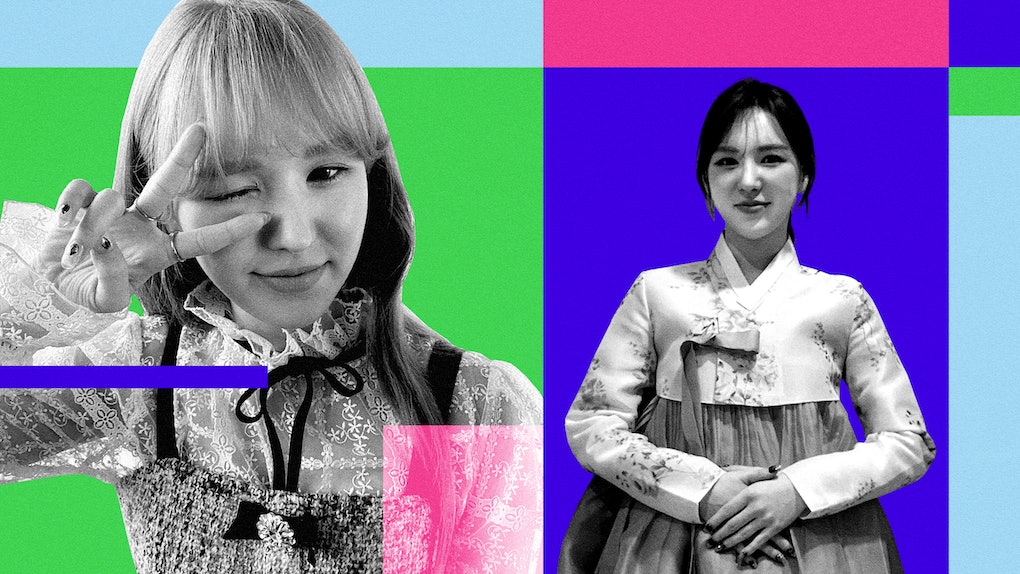 With 'Like Water,' Wendy Found Her Biggest Cheerleaders In Her Red Velvet Bandmates

Seven years after debuting with Red Velvet in 2014, Wendy considers her co-members more like sisters than friends. "They're my everything. Not just [in terms of] friendship, they're like my family. I can't think of life without them," she tells Elite Daily. Irene, Joy, Yeri, and Seulgi have stuck by her through everything, including the recording process for Wendy's debut solo EP, Like Water, which dropped on April 5. Besides offering moral support, the girls gave Wendy feedback for every song on the album, and Seulgi even provided her vocals on "Best Friend." Their involvement throughout the whole process proved that Red Velvet will always have Wendy's back.

As the first Red Velvet member to make her solo debut, Wendy admits she felt confident trying something new thanks to the love from her fans and bandmates. "I knew there were lots of fans waiting out for me, so I wasn't really that afraid [to make my solo debut]," Wendy says, explaining how the girls encouraged her behind the scenes. "They texted me a lot and they even came to the ["Like Water"] music video shoot to support me. Whenever I would text them, they would monitor my songs and comment on them. They kept saying, 'It's good! It's good! I love it! I love it!' They would always cheer me up."

In the end, Wendy conceived a five-track mini-album full of beautiful piano melodies, soft acoustics, and angelic harmonies. The project is meant to comfort her listeners. "[I'm] an artist who's like your friend or family, just someone that you can rely on, too," she says.

Wendy certainly shows that on her EP. In "When This Rain Stops," she reassures listeners their hardships will soon pass, and in "Like Water," she says they can overcome anything with help from those around them. "I'll cover your deep wounds and embrace you... We're destined/ We complete each other and comfort one another/ It makes you heal/ Always like water," Wendy sings on the title track.

Like Water has already struck a cord with fans. Following its release on April 5, the EP went No. 1 on the iTunes Top Albums charts in at least 30 different regions across the world, making Wendy the only Korean female solo artist to achieve this.

Making history with her debut solo single is something Wendy will never forget. Below, you'll find some of her other favorite memories from this year.

This interview has been edited and condensed for clarity.

Elite Daily: Where was this photo taken and what were you doing?

Wendy: The photo was taken at a show called Mystical Record Shop that I was one of the emcees at and I'm wearing the Korean traditional hanbok. It was for the [Korean] New Year, and under that, it says 2021 [because] it's the Year of the Ox in Korea. That picture was taken for my fans to say, "Happy New Year!"

ED: What does it mean to you to be able to spread the cultural significance of hanbok with fans from all over the world?

W: Because I'm Korean and because I'm a K-pop singer, I think it's important to show my side to all the fans around the world. I think it's good to share all cultures together because I like to see different kinds of cultures of different countries and I'm pretty sure my fans love it, too.

ED: Joy hosted your Like Water press conference on April 5. What was it like having her there on such an important night?

W: It's really different being with your member or not, and because Joy was there, I was able to rely on her a bit because I was really, really nervous that time, and I was really comfortable when I was with her. She was perfect!

ED: Are there any funny stories from the night?

ED: Joy said she cried while listening to "Best Friend." Why do you think the song resonated with her so much?

ED: What was it like recording the song "Best Friend" with Seulgi, and why was she the perfect person to collaborate with on this track?

W: It was fun. She is my best friend, and thankfully, when I requested her to sing with me, she said yes. Because she's my best friend, [the song was] more important to me. I loved it. She was the first one that came up on my mind. We both have warm vocals, but different kinds of warm vocals, and I thought she was perfect [for] a duet.

ED: Joy joked she was "jealous" you collaborated with Seulgi. If you get a chance to collab, what kind of song would you make with Joy?

ED: Why did you choose this look for your "Like Water" shoot, and how does it fit with your album?

W: This was actually the main costume for my music video and I think I'm just looking over and thinking about myself and the year that I've had. I thought it [would] fit my calm image and it would be perfect for "Like Water." It's a warm song, so I thought that whole image and the looks and everything would fit perfect.

ED: This dress is gorgeous. Do you prefer getting all dressed up and rocking high-fashion looks or wearing comfortable clothes?

ED: What's your secret for posing for photos so well?

In Elite Daily’s I Can Explain… series, we’re asking celebrities to revisit their most memorable photos and tell us what really went down behind the scenes. Read more here.