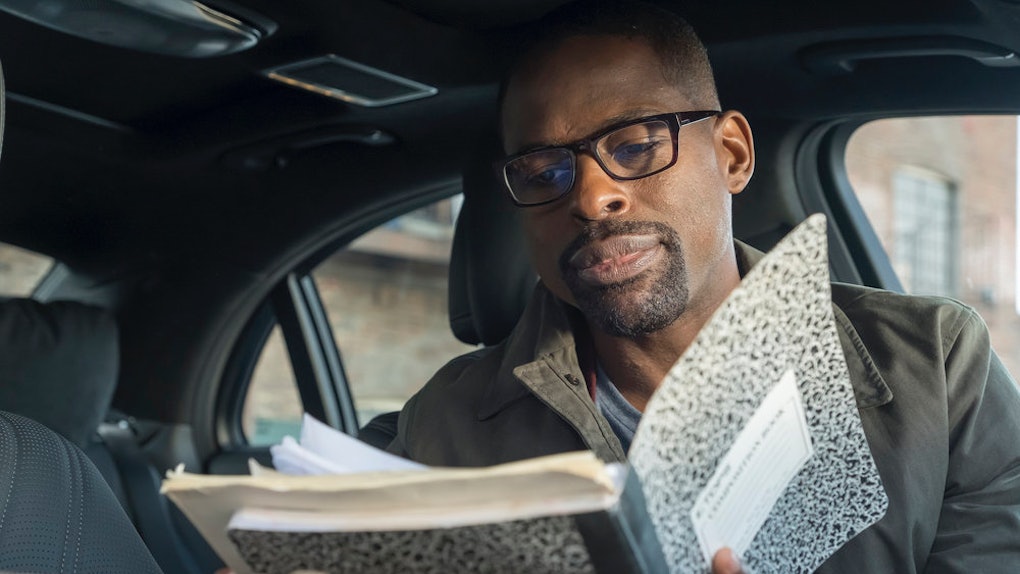 Season 1 of This Is Us was filled with life changes for all the characters, but none more than Randall, who in the space of a year gained and lost his biological father. William was one of the show's most deeply felt characters from the beginning, and his poems echoed through the episodes. So perhaps it's not a surprise that this week Randall turned up yet another one of William's poems on This Is Us. Tucked away in a composition book, Randall found himself reading a moving love poem that was clearly written to a woman.

The poem was accompanied by a few loose sketches of the lady in question, her eyes, most, the back of her neck, her hair. It's entitled "Lady" and it is a heart-meltingly sweet yet short free verse.

My lady, my love, my neighbor./Lady I am straight up fixed on you/just as you sit, fixed straight upon me./Our glue has long been set./Each morning I wake up/and head straight towards you./And each afternoon/we sit together with your children/and watch the world go dark./Always I walk the same steps/I push open the door/and I end up in front of you./Always you, my love/Always you, my lady.

Watching Randall become obsessed with finding the reason the poem was written though? That was something else. He was so obsessed, it was to the point where he actually blew off the interview to gossip about it with William's old neighbor. Beth might be begging him to come down from the clouds, but unless there is some miracle, I was starting to think he'd never be anywhere near ready.

What did Randall learn by chasing old ghosts around the building? That William was a man who was loved. Not by one woman, not by some special friend, but by all those who lived in the building. He was the man they ran to when the stove stopped working. He was the one they came to when the lights went out, or the heat was busted. He chased those ghosts all the way to the Super's office, who laughed at the notion William was in love with someone from the building.

What he was in love with was living here, being a part of the building and the community. He loved this place and everyone in it. As she said: "When he moved out, it was like the heart left, and the blood has nowhere to go."

What embodied this life, this apartment living, this small world William had built in the apartment? Lady Day, i.e. Billie Holliday. We already knew of William's love of her music, of jazz, of songs. What we didn't know is that he wrote paeans to her, to the poster of her, outside his kitchen window. Those sketches were her face on the billboard outside, as he sat in the kitchen, spending the evening after a long day with his cat friend, Clooney.

Yes, Clooney! The episode title isn't about George, nor was it about Kevin's acting. It was about the ugly cat that William once mentioned in passing.

By the end of the episode, finding that poem has given Randall a purpose now too. He wants Beth to go into business with him, buy that building that his father loved so much, and turn it into the best Affordable Housing Unit in Pennsylvania.

Come down from the clouds? That's not Randall's style. Randall's not like Jack, who gave up his dream of running his own construction company to make sure his kids could afford to go to the mall on a whim. Randall took his father at his word: Make your choices, and own them. Randall's choice is to stay dreaming, and dream as big as he can while he's there and make it real.

Not bad for one little poem.

More like this
In 'Riverdale' Season 5, Toni Topaz Is The Black Superwoman Without A Cape
By Erika Hardison
Who Did Emily Poison? 'The Handmaid's Tale' Season 2 Is Off To An Intense Start
By Ani Bundel
The 'Grey's Anatomy' Season 17, Episode 13 Promo Teases Meredith's Big Decision
By Abby Monteil
Stay up to date