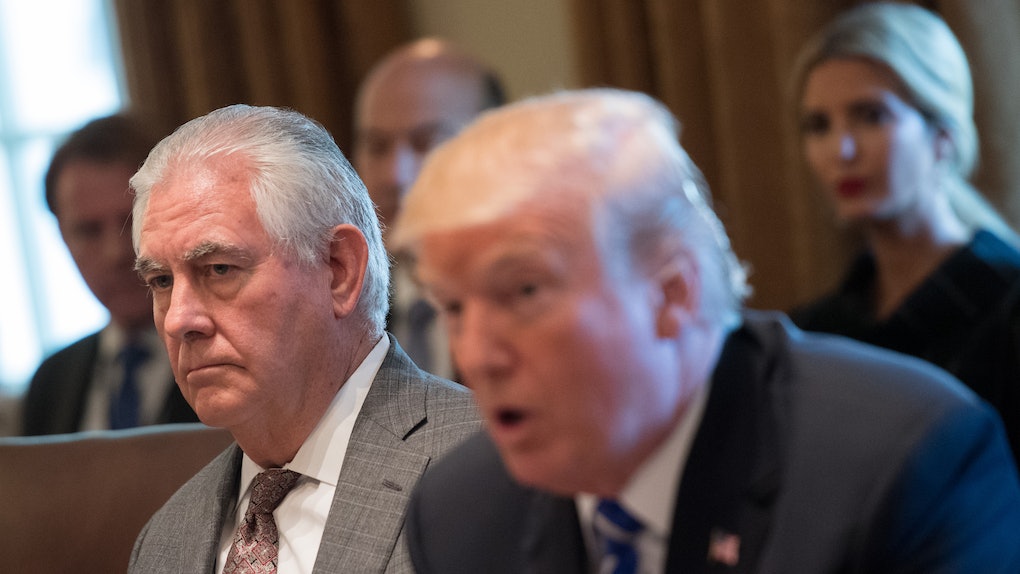 Will Trump Fire Rex Tillerson? A New Report Says It's Getting Close

For the better part of the year, multiple reports have indicated that President Donald Trump has a bad relationship with his secretary of state. Those reports have always made the question of if Trump will fire Rex Tillerson worth asking. On Thursday, Nov. 30, the answer to that question became increasingly clear: Trump's White House has a plan to remove Tillerson from his secretary of state role over the next couple of weeks, according to a new report from The New York Times.

According to the Times, the plan involves firing Tillerson and replacing him with Mike Pompeo, the current director of the CIA. The White House would then have to nominate a new CIA director, and the plan would be to select Sen. Tom Cotton (R-AK), a fellow GOP politician who has been supportive of the president.

On Wednesday, after Trump introduced the crown prince of Bahrain at the White House on Wednesday, the president was asked about whether the secretary of state would remain in his role. "Rex is here," Trump, said.

White House Press Secretary Sarah Sanders echoed Trump's response when she was asked about Tillerson's status. "As the President just said, ‘Rex is here.’ There are no personnel announcements at this time," Sanders responded, according to the White House pool (i.e. the group of reporters that follow the president and the White House).

Trump and Sanders have both been asked similar questions in the past, most notably in October, after a NBC News report stated that Tillerson called the president a "moron" during the summer. According to NBC, Tillerson's comment came after the secretary of state was at a national security meeting with Trump and members of the U.S. Department of Defense.

During the meeting, leaders explained to Trump that the numbers of nuclear weapons worldwide has decreased over the past number of decades. The president said he wanted an increase of nearly ten times more nuclear weapons, NBC News' reports says, which then led to Tillerson referring to Trump as a moron after the meeting.

After NBC News published its report, Tillerson would eventually hold a press conference to state his allegiance to Trump.

Despite the public show of support for the president, Tillerson refused to outright deny that he called Trump a moron.

"I’m not going to deal with petty stuff like that," Tillerson said during the press conference, after reporters asked him about the NBC News report. "This is what I don’t understand about Washington. Again, I’m not from this place. But the places I come from, we don’t deal with that kind of petty nonsense."

When asked about the reported "moron" comment ten days later by CNN's Jake Tapper, Tillerson said, "I call the president ‘Mr. President.' At the end of the day, he makes decisions. I go out and try to implement those decisions."

Tillerson also insisted that he was not leaving his role. Now, however, it looks like the White House will make him.

Why Rex Tillerson Getting Fired Is Important

As secretary of state, Tillerson heads the state the department and sets the America's diplomatic agenda. In other words, Tillerson plays a big role in how the U.S. interacts with other countries and what types of relationships the nation has worldwide.

At a time when North Korea continues cause national security concerns and the American-British relationship seems strained (at least momentarily), the role of the secretary of state becomes that much more important.

Still, reports have long indicated that Tillerson's state department and Trump's White House never established a good working relationship. Now it looks like that relationship is coming to an end full stop.