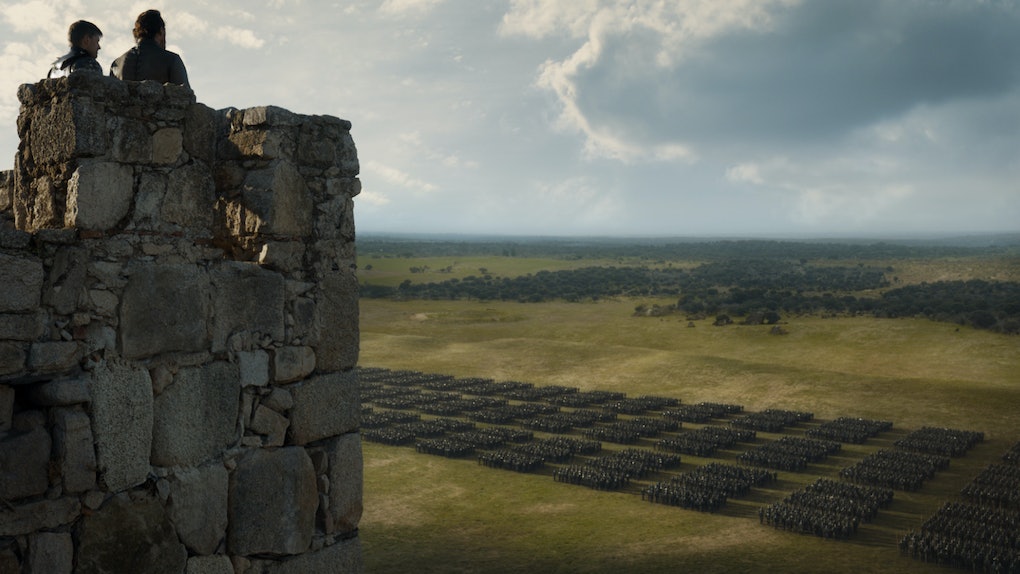 Will There Be A Time Jump In 'GOT' Season 8? This Theory May Be The Answer

There's not much known about what will happen in Game of Thrones Season 8 yet. Fans can guess at the big moments to come. Jon will find out his real name. He and Daenerys will face down the Night King on dragonback in the show's first air-to-air combat. At some point, Cersei will be taken down. But what are the exact details? And more importantly, when does the story pick back up? Will there be a time jump in Game Of Thrones Season 8?

Fans have heard this threat before. George R.R. Martin's novels are to blame. Supposedly, there was going to be a time jump after A Storm of Swords. The story picks up with Daenerys' return to Westeros, five years on, in A Dance With Dragons. This would have been the second trilogy, with The Winds of Winter and A Dream of Spring.

As most fans know, this didn't happen. Martin wrote so much for A Dance With Dragons, his editors split it into two books, creating A Feast For Crows, which didn't time jump after all.

But there's a new theory the threatened time jump won't happen. The source comes from the CV of one of the costume seamstresses who worked on Season 8.

Five credits making costumes for Emilia Clarke in Season 8, and then the sixth episode listed separately, suggesting the costumes for the premiere of Season 8 are somehow different. The good news is it means Daenerys lives to the end of the series. But what's up with the first episode? The most obvious explanation is the costumes are carryovers from Season 7.

Time jump? No, more like picking up almost exactly where the show left off.

But to be realistic, it's hard to see how Season 8 could time jump anyway. It was one thing for Season 6 to threaten one — it went hand-in-hand with "Jon Snow's really dead." If Jon's dead, picking up after his funeral would make sense. (Of course, all that was a misdirection, but nevermind.)

It even made sense for Season 7 to do a time jump. The last thing viewers see at the end of Season 6 is Daenerys sailing from Meereen. Picking up a few months later when she's settled into Dragonstone would make sense. It would also give time for the smoke to clear in King's Landing, and for Cersei to tighten her grip on the country. Up north, Jon and Sansa could settle into Winterfell, and Arya would have time to make her way home.

But the show didn't, so why would they do it now? The series will almost certainly pick up with Dany and Jon arriving in Winterfell from their boat love nest, to be immediately confronted by Bran and Sam with Jon's real name. The Night King is coming, and it's not going to take his dead army more than a week to get from Eastwatch to Winterfell. There's no time for time jumps now.

Game of Thrones Season 8 will arrive sometime in 2019 on HBO.

More like this
This 2021 'Game Of Thrones' Season 8 Trailer Is So Confusing... & So Good
By Ani Bundel
This TikTok Theory About Eric From 'Boy Meets World' Will Blow Your Mind
By Rachel Varina
These Tweets About Regé-Jean Page Leaving 'Bridgerton' Are Royal Bummers
By Cianna Garrison
Stay up to date