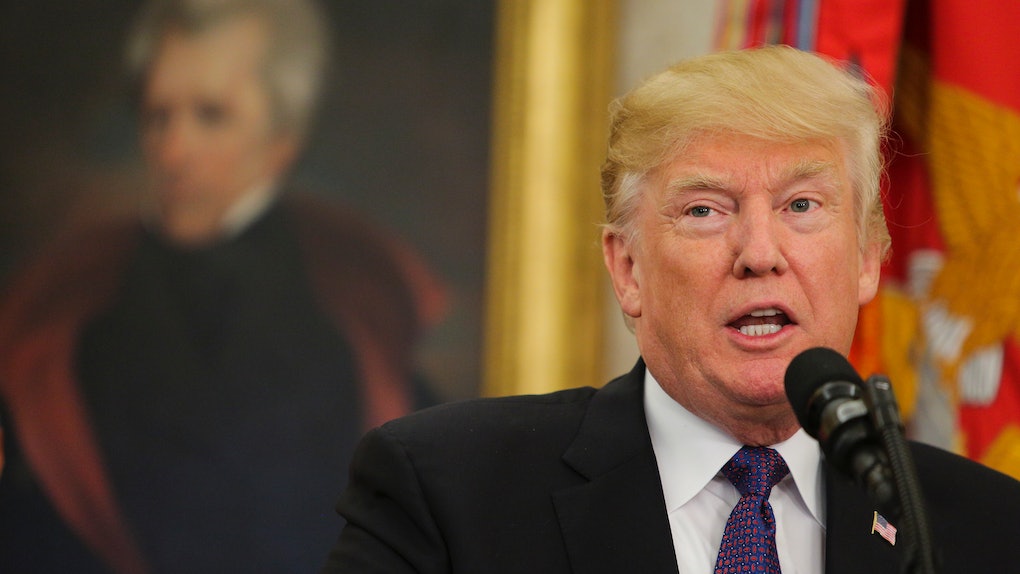 Will There Be A Government Shutdown? DACA & Tax Reform Could Make Or Break It

On Tuesday, Nov. 28, President Donald Trump drew a bleak line ahead of a scheduled meeting with congressional leaders in which they were supposed to hash out a deal to avoid a government shutdown. Whether there will be a government shutdown in part rests on Deferred Action for Childhood Arrivals (DACA) and tax reform decisions, among other key issues. The current funding for the government is slated to end on Dec. 8, the Washington Post reports.

But the meeting fell through after Trump tweeted about Democratic leaders Nancy Pelosi (D-CA) and Chuck Schumer (D-NY).

"Meeting with 'Chuck and Nancy' today about keeping government open and working," Trump tweeted on Tuesday morning. "Problem is they want illegal immigrants flooding into our Country unchecked, are weak on Crime and want to substantially RAISE Taxes. I don’t see a deal!"

After he tweeted that, Pelosi and Schumer, the House Minority Leader and Senate Minority Leader respectively, announced they would not be meeting with the president. "Given that the President doesn’t see a deal between Democrats and the White House, we believe the best path forward is to continue negotiating with our Republican counterparts in Congress instead," read a joint statement from the two.

Both sides are needed to pass the spending plan.

Because Democrats comprise 48 of the Senate seats, they could leverage their power to filibuster spending legislation. In other words, the GOP has to play nice to ensure their Democratic colleagues won't block the vote. Congressional leaders meeting Tuesday are hoping to reach a deal to appease both parties that has a better chance of getting passed.

The government is currently operating on a short-term budget deal reached by Trump, Schumer, and Pelosi in September. The Post says there are suggestions that another such short-term arrangement might be put in place to give all parties time to come to a year-long agreement. Two main issues have bearing on whether Democrats withhold their support for a spending bill.

DACA is one of the issues on the line.

In September, Trump signalled that he would discontinue the Deferred Action for Childhood Arrivals (DACA) program, which allows some 800,000 children brought to the U.S. as children (i.e. "Dreamers") the opportunity to work without risk of deportation for renewable two-year periods. Facing backlash after announcing his decision to end DACA, Trump gave a six-month waiting period to allow Congress to tackle the issue before implementing it.

Democrats have made it a capstone issue to ensure that Dreamers are accounted for in the federal budget. At least four high-profile Democratic senators have signaled Dreamer funding is a make-or-break it issue: Kamala Harris, Cory Booker, Elizabeth Warren, and Bernie Sanders.

Now, Democrats are not the only ones who've said they'll withhold their vote unless it addresses Dreamers. The Post reports that, as of Tuesday, Rep. Carlos Curbelo, a Republican representative for Florida, also stated his intention to withhold support.

Contrary to what Trump suggested in his Tuesday tweet, as the Post points out, the DACA provision being sought would allow current eligible beneficiaries to gain legal status; it would not allow immigrants to enter illegally into the country.

Tax reform is another key to avoiding the shutdown.

GOP senators are pushing hard for a vote on their tax reform bill this week. Tax reform is separate from the spending bill that bears on whether the government undergoes a shutdown. However, Democrats could cause problems for Congress' schedule should they refuse support for the tax bill — and get enough Republican members to also refuse to support it. And some members of the GOP have already motioned they were against the tax reform bill, further pressuring leaders to cater to Democratic demands.

Basically, there's a lot going on that Congress is trying to get done, and if they don't have time to reach agreements, we could end up with a government shutdown. Congressional leaders, by agreeing to meet Tuesday, have signaled their willingness to work together and compromise toward a deal, with or without the president at the table. We'll know later Tuesday whether their effort to do so is successful.

More like this
Skateboarder Brighton Zeuner Never Thought She Could End Up At The Olympics
By Rhyma Castillo
These Tweets & Memes About Matt Gaetz's Venmo All Make The Same Joke
By Cianna Garrison
The More Contagious B-117 COVID Variant Is Now The Most Common Strain In The U.S.
By Rhyma Castillo
Stay up to date