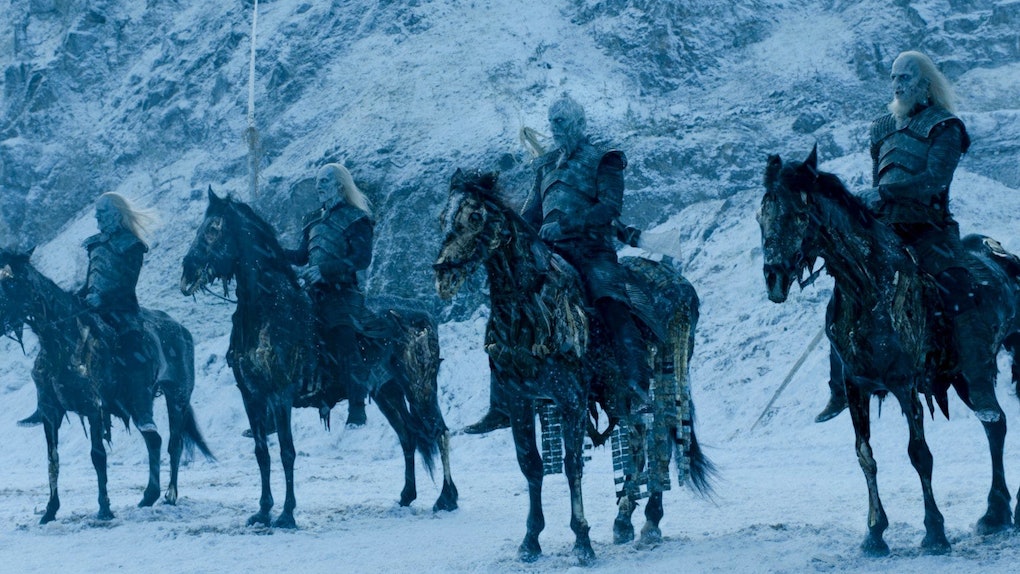 Will The White Walkers Be In The ‘Game Of Thrones' Finale? Fans Have A New Theory

In Game of Thrones Season 8, Episode 3, the living fought the dead in the Battle of Winterfell. The Night King had led his army of White Walkers and wights to Winterfell presumably to expand his army and create more dead soldiers — although it's difficult to know for sure since the Night King's motives were never clearly revealed. But regardless of his goals, the Night King was taken down by super-assassin Arya Stark, and his entire army fell with him. It seemed like that was it for the White Walkers, as the story moved to King's Landing and the focus was placed on the battle between Daenerys and Cersei. But, a fan on Reddit thinks that audiences might not have seen the last of the White Walkers, and that one of the characters already on the show might carry White Walker blood.

In Season 2, the series explained how Craster, a member of the Free Folk who live in the North, would continue his lineage through incest with his daughters. He would keep female babies and would sacrifice the male babies to the Night King so they could be turned into White Walkers. One of those babies is still a character on the show: Gilly's son, Little Sam. In Season 3, Sam and Gilly escaped with Little Sam just as a White Walker came to take him. Even though they left with the baby, some fans think that there still might be White Walker blood in him now.

Reddit user TurntCrawdad expands upon the theory. They say:

As we know, GRRM's writing is often influenced by the works of famous historical writers, as well as history itself. When I was reading about Gilly, I came to understand that her name originates from the real-life plant known as gilliflower/gillyflower. Gilliflower is mentioned in Shakespeare's "A Winter's Tale", in which they are "cross-fertilized by humans, rather than by Nature. I'm almost certain that this is a subtle clue that might strengthen a suggestion that Gilly and Little Sam have White Walker blood in their veins.

The theory goes even further from there. The Reddit user says:

It also made me wonder whether the NK came to Bran/3ER at Winterfell not to kill him, but to take ownership of his property - namely Little Sam.

There's a possibility that Little Sam has been the key to all the White Walker drama all along. And if he has White Walker blood in him, that could mean that he could become a new new Night King. After Daenerys' fiery blowout in Season 8, Episode 5, it looks like someone will have to go against her to restore some sort of order in Winterfell. Could that someone be Little Sam?

Hopefully fans will get all the answers they're looking for when the series finale of Game of Thrones airs at 9 p.m. ET, Sunday, May 19, on HBO.

More like this
This 2021 'Game Of Thrones' Season 8 Trailer Is So Confusing... & So Good
By Ani Bundel
10 Questions The ‘Schitt’s Creek’ Finale Left Unanswered
By Rachel Varina
This TikTok Theory About Eric From 'Boy Meets World' Will Blow Your Mind
By Rachel Varina
Stay up to date