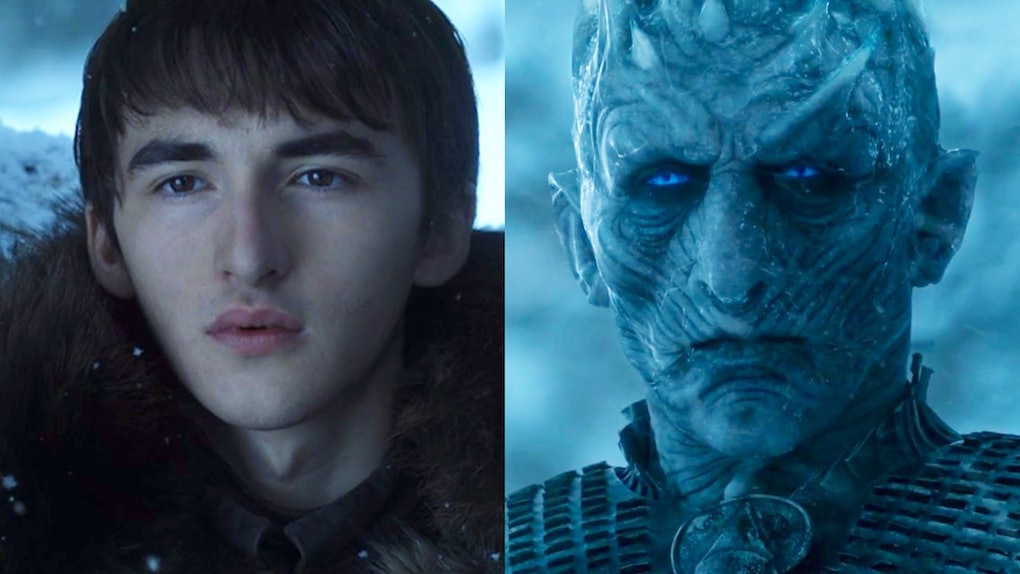 Will The Night King Kill Bran? 'Game Of Thrones' Fans Are Expecting The Worst

Bran Stark, in true Season 8 fashion, got hella cryptic on Game of Thrones. While he's spent some time throwing shade earlier in this episode, he provided some major clarity on how the army at Winterfell can actually stand a chance against the Night King when he and his army of White Walkers arrive in the north. So will the Night King kill Bran? He's decided to let himself be bait in the upcoming battle.

The end of Episode 2 set fans up for what's bound to be the first massively heartbreaking episode of the final season. After Jon reveals the truth about his parentage to Dany in the Stark crypt (she doesn't take it too well, as you can imagine), the White Walker army officially arrives at Winterfell, and everyone is basically screwed. During a strategizing session earlier in the episode, however, Dany, Jon, and the other leaders in this fight brainstormed ways that they can take down the Night King. Their theory is that killing the Night King will end the entire war, though no one thinks the Night King will put himself in a place of vulnerability because of this. That's when Bran pops in with a huge piece of information.

"He will come for me," Bran revealed. "He's tried before. Many times with many Three-Eyed Ravens."

"Why? What does he want?" Samwell Tarly asked.

"An endless night," Bran responded. "He wants to erase this world, and I am its memory." Whoa. Heavy. Sam then goes into an equally deep point about death.

"That's what death is, isn't it? Forgetting? Being forgotten. If we forget where we've been and what we've done, we're not men anymore. We're just animals."

That point right there is reason enough to believe that if the Night King doesn't kill Bran, he's at least going to try his damnedest. Next week, April 28th's, episode is the first battle between humans and White Walkers that is on the grounds of one of the castles of the seven kingdoms, so there is more at risk than ever before. Especially when you consider everyone who is currently at risk of dying next week just for being in Winterfell. So the group's best bet right now is to try and lure the Night King into a place of vulnerability so they can attempt to take him down.

That's when Bran told everyone about the mark the Night King left on him.

This mark on Bran's right arm is the only reason the Night King has marched his army to Winterfell, so it puts Bran in a simultaneously dangerous and advantageous position. If they can use the mark to lure the Night King into a spot where they're prepared to attack him, they might be able to take him down.

But the Night King is extremely powerful, so it's entirely possible he'll kill Bran before they can try to attack the Night King with Dany's dragons and their dragon glass weaponry. Plus, Bran has so much knowledge to pass on. It just feels way too soon.

Brace yourselves, y'all. Winter is freaking here.