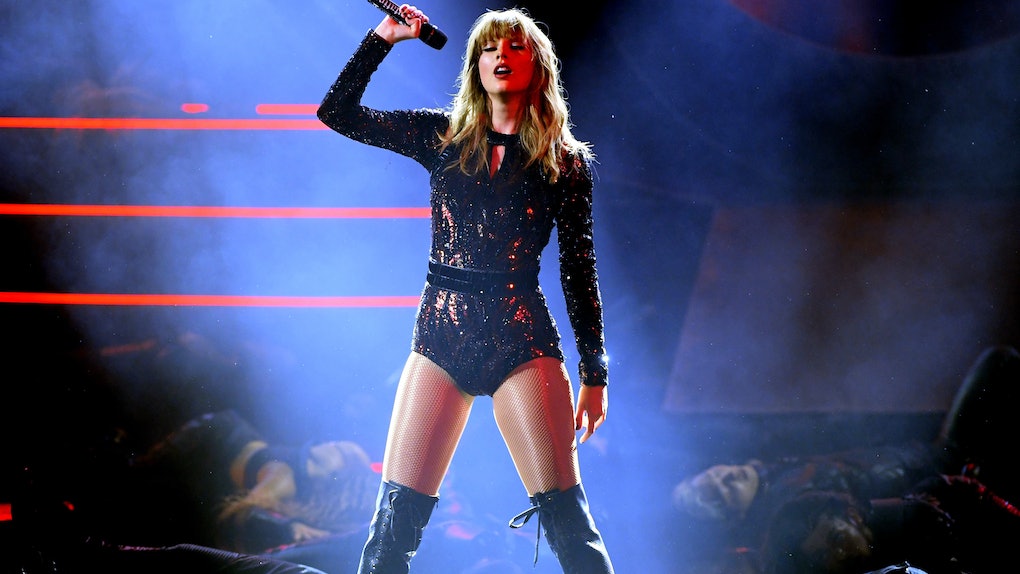 Will Taylor Swift Drop An Album In 2019? Fans Are Ready For It

Fans of music's biggest country/pop crossover crooner may be in for a sweet treat this year. Rumors claim this talented songstress is working on new music, leaving Swifties to wonder, if Taylor Swift will drop an album in 2019. According to celebrity blogger Perez Hilton, that could certainly be the case. While attending the Los Angeles show of T. Swift's largely successful and record breaking Reputation Stadium Tour earlier this year, Hilton spoke with Swift backstage at the Rose Bowl stadium about the potential release of a new album, which he later documented in a vlog on his official YouTube channel.

In the video, Hilton shared, "What I did say to Taylor was I would love it if the next album had a song called '30' to keep up the continuation. She had 'Fifteen,' she had '22,'" referring to tracks off of Swift's earlier Fearless and Red albums. He continued, "She's like, 'Oh, well, the next album will definitely be out before I'm 30.'" This means that Swift, who will be turning 30 in December of 2019, could most certainly be putting out another record in a year that is set to see music releases from other big name female artists such as Rihanna, Adele, Ariana Grande, and Madonna.

Swift has released new albums every two years since the fall of 2006, minus a three year hiatus between her 1989 and Reputation albums, so a new album before the year's end would certainly make sense and follow past procedure. Hilton is hoping to get a "full-on return to country" on Swift's next album, but Swifties have a feeling that there may be another theme to go along with her seventh studio album: Mermaids.

According to online theories, fans speculate that Swift's next music venture will revolve around the mythical creatures. Swift dressed up as Ariel from Disney’s The Little Mermaid at her end-of-the-year party, where guests were invited to come as their childhood heroes. Upon further inspection, Swift sleuths discovered that Swift has also been wearing mermaid attire, including a camo jacket she wore in the magazine that was released alongside physical copies of Reputation and a mermaid themed t-shirt that she can be seen wearing during the blooper reel of her Reputation stadium tour special that is currently streaming on Netflix.

Taking to Twitter, one fan tweeted, "What does Ariel do? She transforms. What would happen after Taylor’s Reputation is cleared? She’ll transform!!!" while another shared, "If @taylorswift13 drops a mermaid themed album based on their lore of being murderous and beautiful do YOU UNDERSTAND HOW MUCH I WOULD LIVE IT?!! THE EXCITEMENT IS REAL!!!"

Though these rumors are just speculation, it wouldn't be a surprise if Swift was dropping hints for her loyal legion of fans to find and discover. And whether or not these mermaid theories do pan out to be true, whatever Swift has in store for her next album is sure to top all expectations and be another record breaking smash hit.

More like this
TikTok’s Taylor Swift Era Trend Documents Your Throwback Swiftie Evolution
By Rachel Chapman
Taylor Swift's 'Fearless (Taylor's Version)' Lyric Changes Are Small, But Meaningful
By Michele Mendez
Which Album Will Taylor Swift Re-Release Next? Her Hints Have Fans Shaking
By Brandy Robidoux
Stay up to date