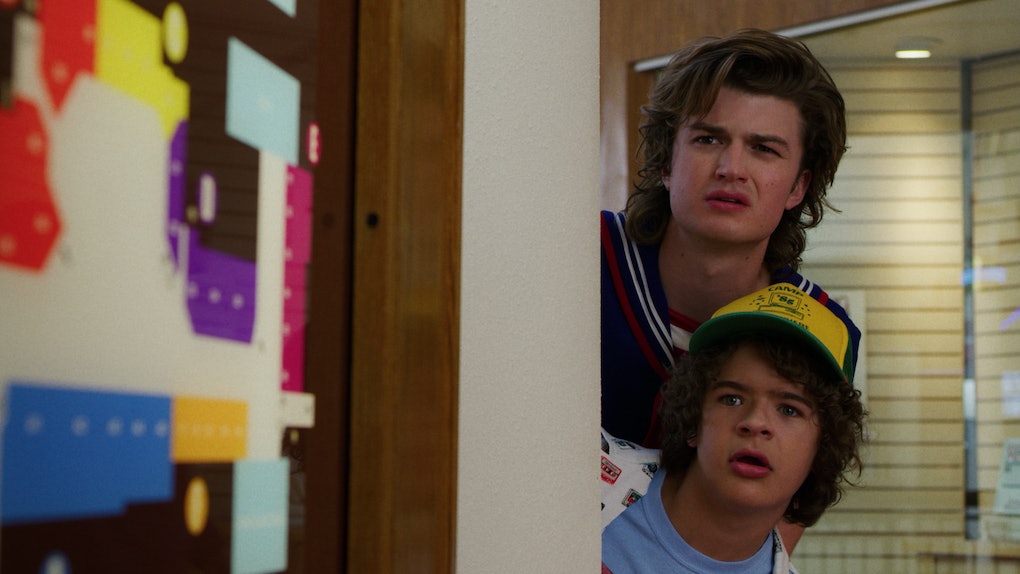 This post contains spoilers from Season 3 of Stranger Things. On Stranger Things' summer-themed season, Dustin returned from science camp to find his friends entrenched in summer romances and, in Will's case, experiencing signs of the Mindflayer's return. Joining Will as a singleton wasn't in the cards, as Dustin came home with stories of his camp girlfriend Suzie. After the others doubted this girl's existence for most of the season, Dustin contacted Suzie for help in saving the world, leading to a standout musical moment. Will Suzie be in Stranger Things Season 4? Nothing's official, but fans want her romance with Dustin to be a never-ending relationship.

Although Season 3's post-credit scene all but confirmed that more Stranger Things is on the way, Netflix has yet to announce whether another season of the sci-fi hit will be made. There's still plenty of time for the streaming service to make things official, but for now, fans have delighted in the series' newest characters. From Slurpee-loving scientist Alexei (Alec Utgoff) to sarcastic Scoops Ahoy salesgirl Robin (Maye Hawke), Season 3 introduced an eclectic mix of new folks to Hawkins, but one of the most entertaining additions wasn't even in Indiana.

As Dustin (Gaten Matarazzo) explained upon his return from Camp Know Where, his girlfriend Suzie was a Mormon who lived in Utah, forcing the two to keep in touch via homemade radio tower. In the aptly titled "Suzie, Do You Copy?," Dustin unsuccessfully tried to contact her, causing his friends and audiences to wonder if she had ditched him or if they were even a real item in the first place. It wasn't until the season finale that Dustin reached Suzie for help in remembering Planck's constant, which was the combination to the safe guarding the keys to the Russians' machine.

Upset about Dustin going MIA, Suzie (Gabriella Pizzolo) refused to help until he joined her in a duet of "The NeverEnding Story." The performance was an uplifting break from the tension surrounding the Mind Flayer and Russians, and three months later, Max (Sadie Sink) and Lucas (Caleb McLaughlin) were still teasing Dustin about the song. If Dustin is generally OK with their jokes, him and Suzie still being together seems likely, but what are the chances of her appearing in Season 4 and even reaching Hawkins?

As Dustin said, him not being Mormon meant that Suzie's parents wouldn't approve of their relationship, but several factors already point toward Season 4 taking viewers outside of Hawkins. The Byers family and Eleven (Millie Bobby Brown) left town, and the post-credits scene suggested that an American audiences know is in a Russian prison. If hitting the road becomes a theme of Season 4, could Dustin and Suzie meet elsewhere? Could she join the main group as another science and numbers expert?

It's too early for any definite reports of Suzie's return, but the fans who aren't blaming her singing for Hopper's (David Harbour) death are eager to see more of her.

Fans will have to wait and see if Dustin and Suzie's summer romance becomes even more epic in future Stranger Things episodes. Season 3 of Stranger Things is streaming on Netflix.

More like this
This 'Stranger Things 4' Theory About Eleven's Past Is Super Dark
By Ani Bundel
When Will 'Grey's Anatomy' Season 17 Be On Netflix? Here's What To Expect
By Ani Bundel
Is Jesper A Grisha In 'Shadow And Bone'? This Tiny Detail Could Be A Hint
By Dylan Kickham
Stay up to date