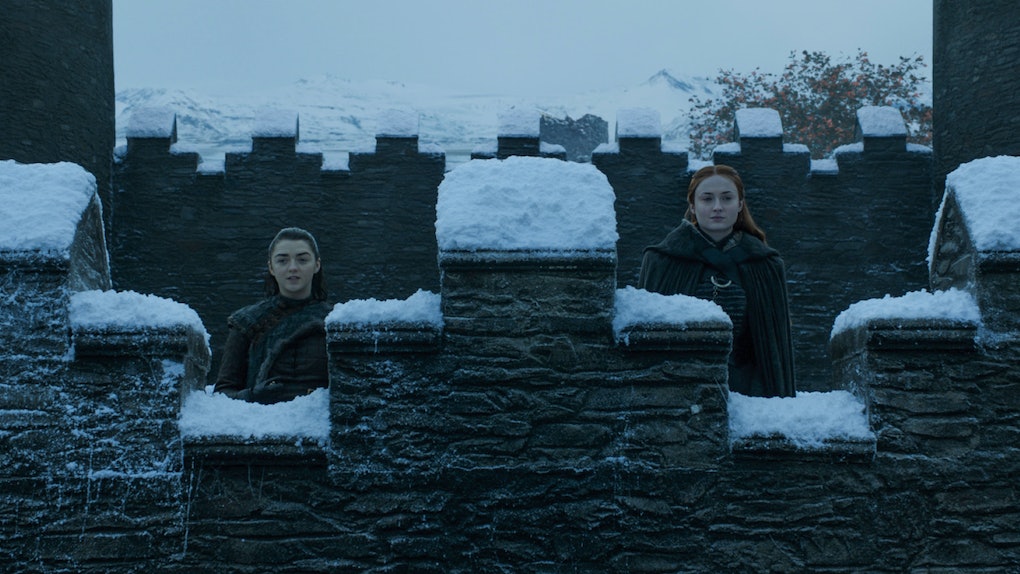 Will Sansa & Arya Survive 'Game Of Thrones'? A New Study Might Give It All Away

Game of Thrones Season 8 is only five months away (give or take) and the anticipation is heating up. With only six episodes left in the entire series and nearly all the main characters from Season 6 still alive, fans have started doing the math, and it's not pretty. The chances the final season will be a slaughterhouse are mounting, and everyone is looking for ways to predict who will make it out alive. Will Jon Snow and Daenerys Targaryen live? Will Sansa and Arya survive Game Of Thrones?

With so many people looking for answers, bookies are making bank on playing the odds of who will die first. But this is not a really statistically accurate measurement. For those who wish to apply the scientific method to figure out who lives and who dies, a rigorous study is necessary.

Lucky for everyone, a rigorous study is currently being undertaken. Published in The Journal Of Injury Epidemiology, the latest data has been crunched in hopes of using the previous deaths in the last seven seasons to predict who from the final season is marked for death. The good news is the findings sound plausible. The problem is, no one will actually know until April of 2019 if they are correct.

But if the findings of this study are right, it's good news for the Stark sisters, and bad news for someone like Edd, the current Lord Commander of the Night's Watch.

The probability of survival was worse for characters who were male or lowborn, who had not switched allegiance during the show, and who featured more prominently.

Sansa and Arya are female, highborn, and have switched allegiances when politically expedient. Therefore, the chances of them surviving to the end are far higher than a lower born man who has been shuffled off for most of the last season and has always been loyal to Jon Snow.

This is also good news for Daenerys, even though the "switched allegiances" is less applicable. (Her allegiance is always to herself.) The irony is, looking at the data, Cersei would also be high on the survival list. But in this case, I believe there are what one would call "mitigating circumstances," such as "murdering entire swaths of the King's Landing population."

Also on the losing end of these findings: Tyrion and Jaime Lannister. Jaime has always been loyal to Cersei, and his screen time has shrunk in the last years. (Though Nikolaj Coster-Waldau makes the most of every scene, so it doesn't feel like it.) Tyrion has been less loyal, so he's a little safer. But one misstep, or one misplaced moment of faith in his family, and the Queen's current Hand will probably be toast.

But in the end, everyone is at risk, when one boils down the numbers.

The mortality risk is high among characters in Game of Thrones. The probability of dying within the first hour after first appearing on screen was about 14%. By the end of the seventh season, more than half of the important characters had died, with violent deaths being the most common by far.

The final season is going to be rough. Game of Thrones' last six episodes air beginning in April of 2019.