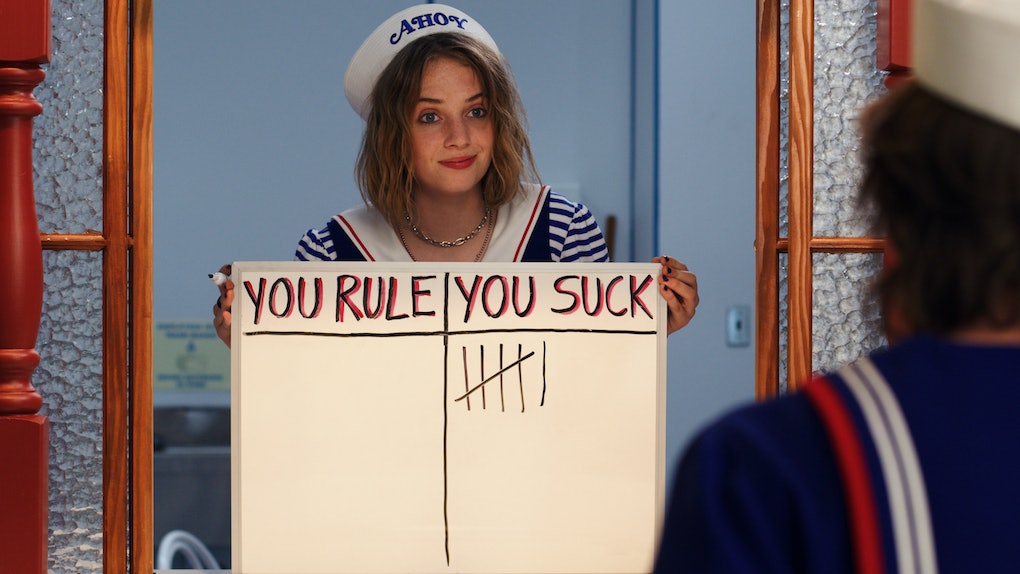 Will Robin Be In 'Stranger Things' Season 4? Here's A Big Clue

Stranger Things Season 3 ended on the biggest cliffhanger yet. Even though the season's conclusion felt final, it opened more questions than any dramatic cut to black could have created. If the Byers (and Eleven) have left Hawkins, and Hopper is in Russia, then what in heaven's name happens next? Where will the show be set? Who will be part of the next season? The core cast will probably return, but what about the newer ones? For instance, will Robin be in Stranger Things Season 4? If she's not, does the fandom riot?

Robin (played by Maya Hawke) was the surprise hit of Season 3's new additions. Even though you cannot spell "America" with Erica, the Scoops Ahoy dairy drone was one of the funniest new additions to Hawkins' pantheon of heroes imaginable. It made one wish Robin had been part of the adventures since the beginning. Her continuing takedowns of Steve Harrington (and her utterly flabbergasted response to his relationship with Dustin) was worth the price of admission.

And let's not start on how she deals with Russians. If the CIA knew, they'd be knocking down her door to recruit her.

But that's the problem: Robin has a bright future ahead of her. She deserves more than this small town. Harrington might be stuck in Hawkins for the long haul, but Robin is not, which puts her continued existence on the show in doubt.

Or it did, until the Stranger Things writers accidentally let it be known she'll be back.

Check out this tweet (since deleted) suggesting that — at least in this phase of the script — Robin is back for Season 4.

But those words are key: "In this phase of the script." The fact is, Season 4 has not started filming yet. There is an episode title (for the premiere). Preparations are officially underway to bring the cast back for another round. But filming has not started.

Until the cast is on location and the cameras are rolling, everything can be subject to change. That's been true of Stranger Things before. In the companion series to Season 2, Beyond Stranger Things, the Duffer Brothers, who created the show, admitted there were a lot of changes behind the scenes. Entire sections of the script were rewritten, and whole plotlines shifted.

So the plan might be to bring Robin back at this stage. It might even be to give her some of the funniest lines she's uttered yet. But until actress Maya Hawke is on set, and Season 4 is rolling, one cannot say for sure. Fans just have to hope.