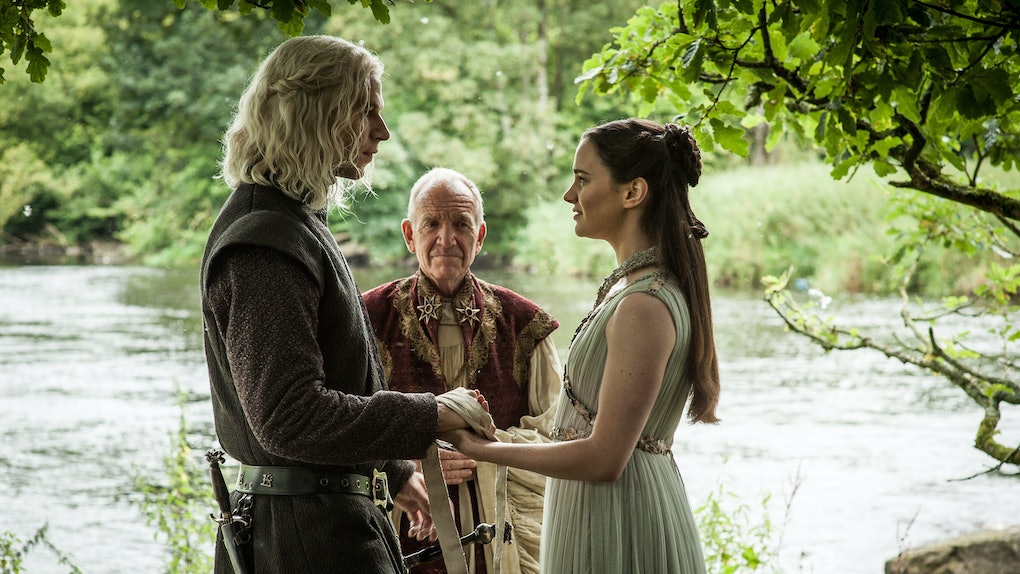 Will Rhaegar Targaryen Be In 'Game Of Thrones' Season 8? Here's What We Know

Game of Thrones Season 8 has been the first season where the production has successfully kept nearly all the details under wraps. With a few exceptions here and there, almost no spoilers have emerged, and little in the way of script leaks have happened. The most fans have to go on are the appearance of actors in Belfast during filming, and logical plot points for what will and won't happen in the final episodes. One of the odder questions, but significant nonetheless, is if Rhaegar Targaryen will be in Game Of Thrones Season 8. His part may be small, but his actions decades before the story begins are about to have massive repercussions.

In Game of Thrones Season 7, the finale revealed Jon Snow was a Stark, the child of Ned's sister, Lyanna. Ned's claims of Jon's bastardy were to protect both his sister's legacy and the baby, as his father was Rhaegar Targaryen. If Robert Baratheon had known the truth about Jon's bloodline, he would have killed the child in a wild rage.

What the finale also revealed, which most fans had not seen coming, is Jon wasn't a bastard. He was the trueborn son of Rhaegar and Lyanna. Rhaegar had secretly annulled his marriage to Elia Martell, declared his two children with her illegitimate, and planned to name his new son with Lyanna Aegon Targaryen, the heir to the Iron Throne.

That's a lot to take in. Bran may well have a deuce of a time convincing Jon of the truth. But he may have help.

It seems hard to believe no one knew about this at all. Princes don't go around annulling marriages and upending established lines of succession in total secret. The book even suggests someone did know: Tywin Lannister. The TV show skips it, but in A Storm of Swords, Tywin tells Oberyn he didn't order Elia killed. Tywin insists he told the Mountain to kill the children because he needed to prove loyalty to Robert. He didn't say anything about Elia:

Elia was the wife of a beloved fallen prince. She could claim to be with child and raise a rebellion. How is she "nothing"?

The only reason for Tywin to say such a thing is he knew she wasn't legally queen anymore. Moreover, Robert must have known too, since killing her to "prove loyalty" wasn't necessary. If they knew, who else knew?

To answer this question, Bran is going to need to go back in time and gaze upon the past once again. This means more scenes with Rhaegar in the final season. And wouldn't you know it, a few months ago, the actor who plays Rhaegar, Wilf Scolding, posted a photo of himself back in Belfast. The photo was taken at the hotel where the actors for Game of Thrones all stay, right smack in the middle of filming Season 8.

Now, it could have been an innocent photo. Scolding could have just been on vacation. But once fans got hold of it, Scolding took it down in a hurry, suggesting he had given away more than he was supposed to.

Will Rhaegar make an encore return in Game of Thrones final season? Fans will find out when the show returns in 2019.

More like this
'House Of The Dragon': 'GOT' Spinoff Cast, Release Date, Filming News, & More
By Ani Bundel
Will There Be A 'Cruel Summer' Season 2? Here's What We Know
By Rachel Varina
When Will 'Grey's Anatomy' Season 17 Be On Netflix? Here's What To Expect
By Ani Bundel
Stay up to date