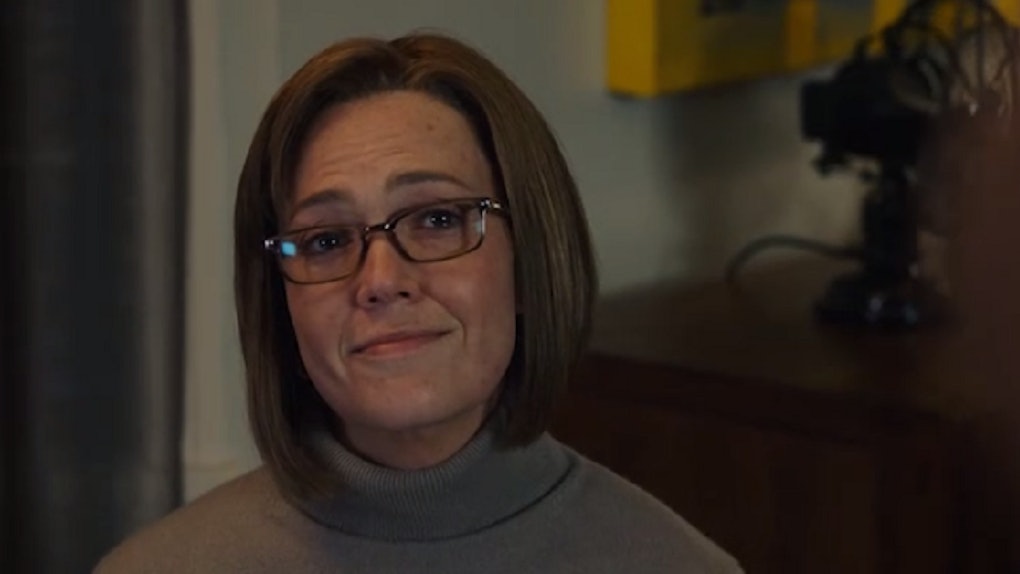 Will Rebecca Die On 'This Is Us'? The Season 3 Finale Has Fans Sobbing

This post contains spoilers for the This Is Us season finale. It was no secret that family matriarch Rebecca was near death in This Is Us's flash-forward scenes, but the Season 3 finale has shone some light on what exactly is wrong with her in the Pearsons' future. The season's closing moments only showed a glimpse of Rebecca, but that fleeting moment is bound to set sail a thousand speculative ships. Will Rebecca die on This Is Us? There still seems to be an air of uncertainty around her in the future, but the episode's final scene assured fans that she has her family supporting her.

This Is Us fans knew that despite having a cancer scare back in the '90s, Rebecca (Mandy Moore) was relatively healthy as a grandmother in 2019. The Season 3 finale "Her" shared another moment from the Pearsons' past in which a car accident led Rebecca to breaking her arm in two different places. The injury forced her to stay in the hospital overnight, and while Jack (Milo Ventimiglia) and her kids all struggled with her being away for a night, the analytical Randall (Lonnie Chavis) particularly worried about her.

His walk down a hospital hallway to see her paralleled future Randall's (Sterling K. Brown) walk into Rebecca's bedroom at Kevin's (Justin Hartley) sprawling home. Although Moore previously shut down the theory that Rebecca had Alzheimer's, the elderly character seemed to struggle with her memory and placing faces. When Randall entered her space, he firmly announced that he was her son. Even if Rebecca doesn't officially have memory loss, people do often experience confusion as they age and approach death. Are fans simply seeing Rebecca's final days play out?

As for why the family is meeting at Kevin's house, an attempt to recreate a typical Big Three birthday party or at least relive childhood seems likely. Beth (Susan Kelechi Watson) came equipped with a Pin the Tail on the Donkey game, while Toby (Chris Sullivan) brought sidewalk chalk. In the possibility that Moore had to lie about Rebecca not having Alzheimer's, is the family trying to recreate The Notebook and jog her memory? Whatever the reason for their meeting is, it's sure to have fans sobbing when the explanation finally appears in full.

Possible clashes or changes with the Pearsons were also teased throughout the flash-forwards. Toby mentioned speaking to his son Jack, likely in his teens by now, and that "they" were on their way, possibly hinting that Jack was with Kate (Chrissy Metz). Remember, Toby was reluctant to come to the family gathering, and in earlier moments, he appeared to live alone. When he arrived at Kevin's house, he also commented on its size, suggesting that he hadn't been there before. Signs definitely point toward him and Kate no longer being together, but we'll have to wait and see.

On the other hand, Randall and Beth are still married, having decided in 2019 to move to Philadelphia so Randall could easily adjust to his new job and Beth could open a dance studio. Back in the future, Miguel (Jon Huertas) appears to have died. He wasn't seen in that timeline, and Jack's brother Nicky (Griffin Dunne) sat in his stead at Rebecca's bedside. Kevin, also absent from the scene, now has a son, but it's unclear whether he's married or if the child's mother is involved in his life.

Even though the reason for this reunion is tinged with sadness, the Pearsons seem fairly happy in the future. While appearances from Toby and Nicky might be a special occasion because of Rebecca's health, the Big Three's family units still seem solid. Of course, fans may feel differently if a future season has Rebecca's death scene in store for them, but for now, viewers can rest easy. When it is Rebecca's time to go, it looks like she'll be surrounded by all of her loved ones. That thought alone has me reaching for the tissues.