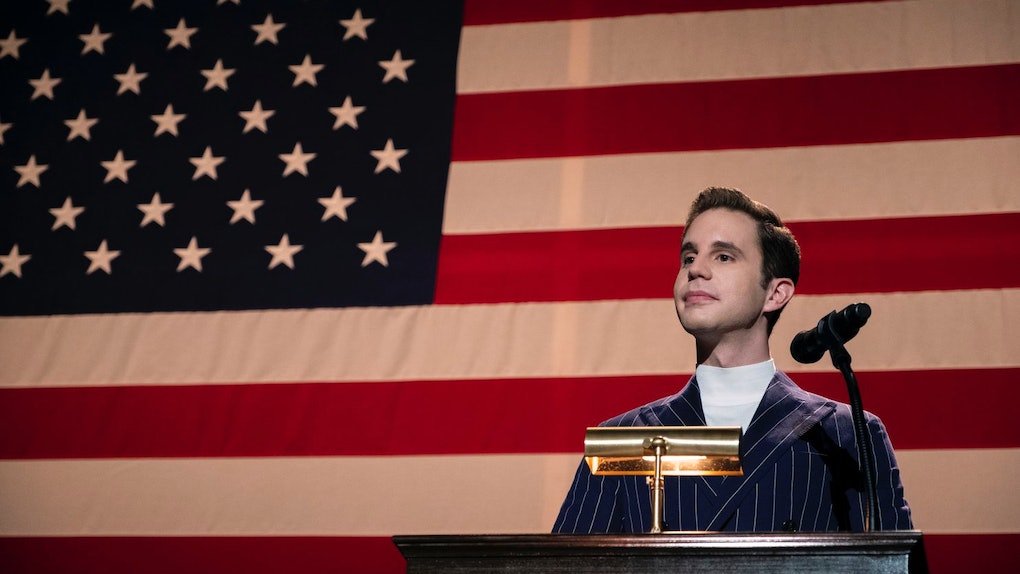 Ryan Murphy's The Politician tells the story of Payton Hobart, an impossibly ambitious high school student, determined to one day become President of the United States. Already ordered for at least a second season, the Netflix show will chronicle his climb to the top; Season 1 is the not-so-typical race for student body president. As Payton (played by Ben Platt) describes himself quite simply in a conversation with the school principal, "I’m not a good person. That’s my flaw. I’m ambitious, I’m political, I’m conniving.” So, yeah. He seemingly has what it takes to make it to the White House. But will Payton actually become president? The cast of The Politician certainly thinks so. Warning: This post contains spoilers for The Politician Season 1.

"It's less of if he's going to and more of how he is going to," says cast member Theo Germaine in an interview with Elite Daily. "What sacrifices are going to be made, what are the casualties going to be along the way, what other drama and ridiculous circumstances are these people going to get into?" Germaine's character, James, is one the members on Payton's counsel. The team, James, McAfee (Laura Dreyfuss), Alice (Julia Schlaepfer), and ultimately Skye (Rahne Jones), all share the same end goal and are ruthlessly dedicated to forging Payton's presidential path.

Schlaepfer's character Alice works just as hard as Payton to fulfill her dream as the future first lady. She pledges herself to him unconditionally. And yes, Schlaepfer also insists that she "could see him as president." Season 1 ends with a time jump four years into the future, and viewers seeAlice engaged to someone who is not Payton. However, she runaway-brides herself back to him right after walking to the altar. The final shot shows Payton and Alice waving in front of a podium as he announces his first run for Senate. "At the end of Season 1, [Alice] has more of a backbone," Schalepfer says. "She's so smart and I can't wait to her utilize that for herself as opposed to just for Payton."

Jones' Skye starts out on the opposing side of the student body election. However, after Zoey Deutch's Infinity gets booted off Payton's ticket, Skye becomes his running mate and eventual VP. Although Jones insists that she doesn't "know where Skye's loyalty lies, other than in herself," she thinks "Payton will be president one day, he just has a lot to go through to improve himself."

Season 1 has no shortage of "drama and ridiculous circumstances," as mentioned by Germaine: Payton wins the election by default, survives not one, but two assassination attempts, uncovers the fact his initial running mate Infinity (Zoey Deutch) is a victim of Munchausen by proxy, witnesses his friend/quasi-lover River die by suicide, plays tug of war with his Harvard admission, and drinks away his sorrows at NYU, only to end up running for New York senate. Whewf.

The cast hasn't gotten the scripts for Season 2 yet, so their guesses are as good as yours. Start theorizing. The Politician Season 1 is now streaming on Netflix.

More like this
Deleesa From 'The Circle' Season 2 Did SO Much Studying To Become Trevor — EXCLUSIVE
By Dylan Kickham
'Selena: The Series' Part 2: Netflix Release Date, Trailer, Cast, & More News
By Dylan Kickham
Who Is Cleo On 'Outer Banks'? Carlacia Grant Is New To Season 2
By Ani Bundel
Stay up to date