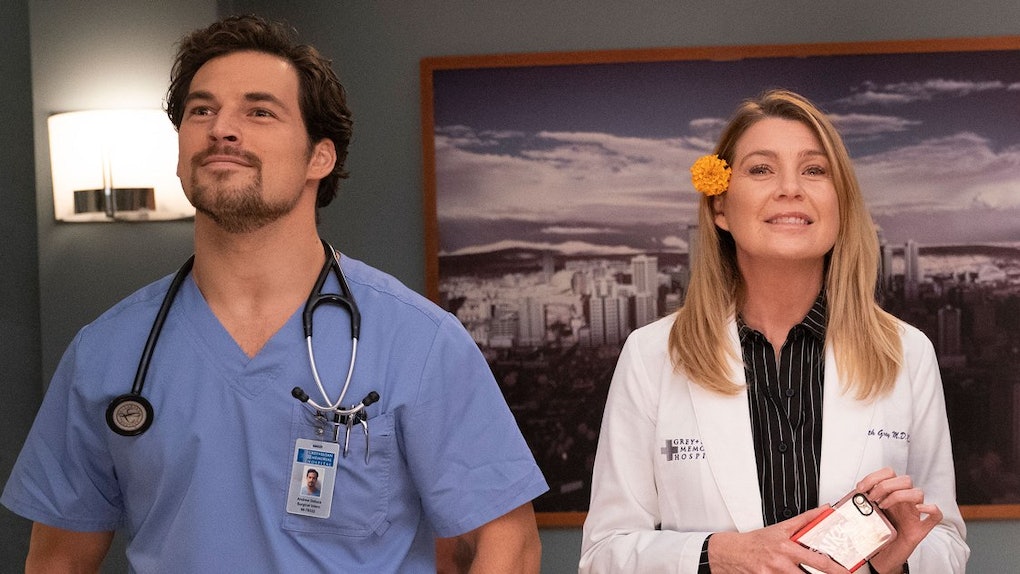 Will Meredith End Up With Link Or DeLuca? 'Grey's Anatomy' Fans Have A Lot To Look Forward To

Grey's Anatomy introduced Season 15 as the "Season of Love." But so far there hasn't actually been all that much love to go around. Jackson and Maggie have been more off than on, Richard and Catherine are keeping secrets from each other, Miranda asked Ben to move out, and everyone knows Owen and Amelia are merely a ticking time bomb for Teddy to detonate. Even Meredith hasn't gotten anywhere, despite her matchmaker. But there are hints the new year will bring a renewal of the love for this season. Just one question: will Meredith end up with Link or DeLuca?

The winter midseason finale saw Meredith finally make a move, asking the not-exactly brilliant, but definitely cute Lincoln Atticus if he was interested in a date. (Link has made it pretty clear the answer would be yes, having asked her the same thing earlier on.)

But the sight of Dr. Grey heading towards another man was too much for DeLuca. Despite all the barriers that make a relationship between them problematic (including Meredith technically being DeLuca's boss), he stepped up to the plate and told her how he felt. And then, as if it put an exclamation mark on it, the two of them promptly got trapped in an elevator together.

According to showrunner Krista Vernoff, the latter half of Season 15 won't be adding any more men to Meredith's suddenly complicated love life options. Season 15 began, in Vernoff's description, as the following:

The question this season is not ‘Will Meredith Grey find love again,’ but ‘With whom will she find love?'

In the end, she's got two choices in front of her: Link or DeLuca. Speaking to TVLine, Vernoff said:

Her dating adventure has boiled down to [that] triangle. I can’t reveal more than that.

What Vernoff does reveal is spending a full episode in an elevator with DeLuca will give Meredith a new perspective on her would-be suitor. In fact, both will come away "with a deeper understanding of each other," as Vernoff puts it.

But this doesn't mean Link will be left out in the cold. The first episode back may spend the hour focusing on DeLuca and Meredith, but the one directly follows will apparently give Link a chance to make his case for Meredith's heart.

Vernoff says viewers should keep an open mind about both of Meredith's potential suitors going forward.