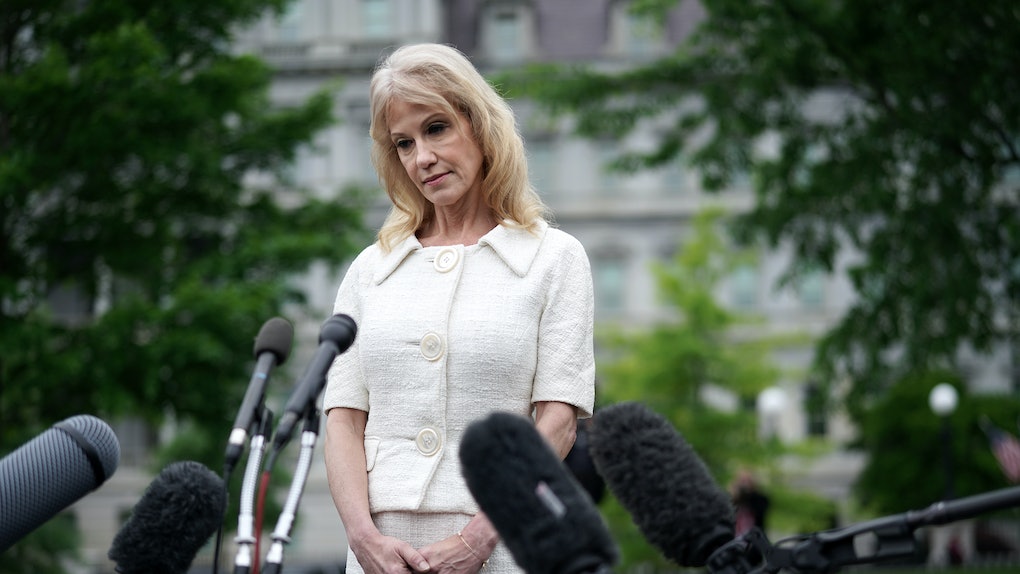 Just when we thought the drama might be over in the White House, here's another doozy for you. On Thursday, June 13, reports surfaced that the Office of Special Counsel (OSC), an independent government organization not to be confused with the special counsel's office recently held by Robert Mueller, had sent a letter to President Donald Trump that urged White House aide Kellyanne Conway be removed from office for allegedly violating the Hatch Act. So, will Kellyanne Conway leave the office? These accusations sound serious.

According to NBC News, the OSC sent a letter to Trump on Thursday, June 13, alleging that top Trump aide Kellyanne Conway had violated the Hatch Act on "numerous occasions" by slandering Democratic presidential candidates during television interviews and on social media. The Hatch Act prohibits government employees from taking part in political activities while serving in office, such as openly voicing opposition to, or endorsing, candidates. The act allows exemptions for the president and vice president but not White House employees.

In the letter, the OSC urged Trump to remove Conway from the White House due to her alleged violations. However, the White House pushed back on the allegation. In a statement emailed to Elite Daily, White House Deputy Press Secretary Steven Groves said,

The Office of Special Counsel’s (OSC) unprecedented actions against Kellyanne Conway are deeply flawed and violate her constitutional rights to free speech and due process. Others, of all political views, have objected to the OSC’s unclear and unevenly applied rules which have a chilling effect on free speech for all federal employees. Its decisions seem to be influenced by media pressure and liberal organizations — and perhaps OSC should be mindful of its own mandate to act in a fair, impartial, non-political manner, and not misinterpret or weaponize the Hatch Act.

According to NBC News, the OSC ruled in March 2018 that Conway had allegedly violated the Hatch Act in 2017 after openly supporting Republican politician Roy Moore against his Democratic opponent Doug Jones in the Alabama election for U.S. Senate. Conway also made some questionable comments regarding Joe Biden's presidential campaign while speaking to reporters on May 1. "Thanks for the free commercial on all the things Joe Biden didn't get done for the eight years he was vice president,” Conway said at the time. A reporter questioned Conway's comments about Biden, suggesting she could be violating the Hatch Act by criticizing Biden. Judging by her response, she didn't appear that bothered.

"Blah, blah, blah," Conway responded. "If you’re trying to silence me through the Hatch Act, it’s not going to work. Let me know when the jail sentence starts."

NBC News also reported that the OSC found that six other Trump aides have allegedly violated the Hatch Act since November, after openly supporting Trump and other Republican politicians on their government social media accounts.

One thing is for sure, it's a good thing the Hatch Act doesn't apply to presidents, because otherwise Trump would be in a lot of trouble. The president isn't shy about expressing his opinions about politicians. Since his presidential campaign, Trump has openly spoken against figures such as then-Democratic presidential opponent Hillary Clinton, Vice President Joe Biden, New York Mayor Bill de Blasio, and others.

At the moment, there's been no word whether Conway will actually leave or be removed from the White House. We'll just have to sit back and see what unfolds.