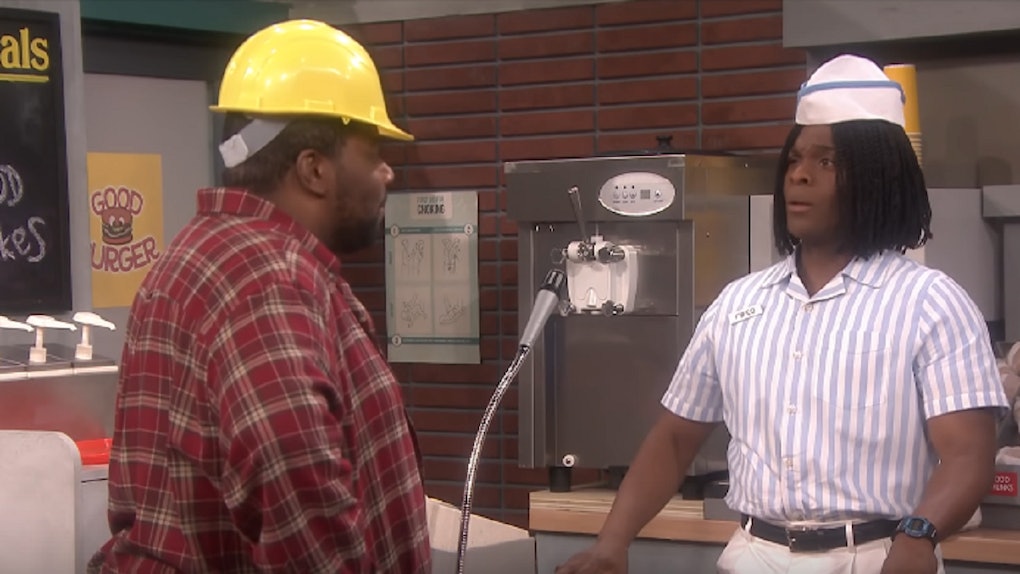 Will Kel Mitchell Be In The 'All That' Revival? Kenan Thompson Has Good News

Original All That star Kenan Thompson is working behind the scenes as an executive producer for the revival of the Nickelodeon sketch comedy show, but we can count on some on-camera cameos from old favorites in the series. When the revival was announced last week, the co-creator of All That confirmed that its former actors would return to introduce new cast members and guest star on upcoming episodes. I can't be the only one craving Good Burger after all this time, so will Kel Mitchell be in the All That revival? Thompson has said that his old buddy is set for a return. Where's the celebratory orange soda?

ICYMI, Variety reported on Feb. 14 that Nickelodeon will revive All That with a new cast. The original comedy series aired from 1994 to 2000 before going on hiatus and relaunching in 2002. Ending again in 2005, the show produced classic sketches like "Ask Ashley," "The Spice Boys," and Thompson and Mitchell's famed "Good Burger." The duo left All That halfway through its run to star on their own Nickelodeon show, Kenan & Kel, but the men reprised their "Good Burger" characters in a 2015 appearance on The Tonight Show Starring Jimmy Fallon.

Given Thompson's executive producer role and the fact that Brian Robbins, the show's co-creator, is now the network president, the project is in good hands. Since this news can apparently only get better, the SNL star just spilled that we're also in store for an even bigger reunion onscreen.

"Whoever's down to come do it, we would love to have them in my opinion," Thompson told Page Six. "I know Kel's coming back... I think all the old cast members should come support the new cast members. That's just how it should go."

Is that my childhood calling?

Mitchell has yet to confirm Thompson's news, but we know that he has no qualms about returning home to Nickelodeon. He and Thompson appeared together on the network's rebooted Double Dare last year, fueling Nickelodeon's apparent trend in bringing back its classic shows. As long as everyone's in a nostalgic mood, why not get the pair together on the new All That?

"It means everything to me,” Thompson told Variety about working on All That again. “It was my first job that I ever had. It gave me an opportunity."

When confirmation of the revival broke, Robbins promised a "mash-up of some of the old sketches and a lot of new sketches.” Thompson also mentioned "working close" with original cast member Josh Server, the only actor to remain with All That for its entire pre-hiatus run. We can also keep our fingers crossed for visits from other original stars like Lori Beth Denberg and Katrina Johnson. It would make sense for the group to revive some of their own sketches alongside new cast members, so if we are in store for a Kenan and Kel reunion, here's to another visit to the Good Burger shop.

The All That revival will premiere this summer on Nickelodeon.

More like this
What Are The Eldritch Terrors In 'Chilling Adventures Of Sabrina'? They're No Joke
By Dylan Kickham
Who Did Emily Poison? 'The Handmaid's Tale' Season 2 Is Off To An Intense Start
By Ani Bundel
In 'Riverdale' Season 5, Toni Topaz Is The Black Superwoman Without A Cape
By Erika Hardison
Stay up to date