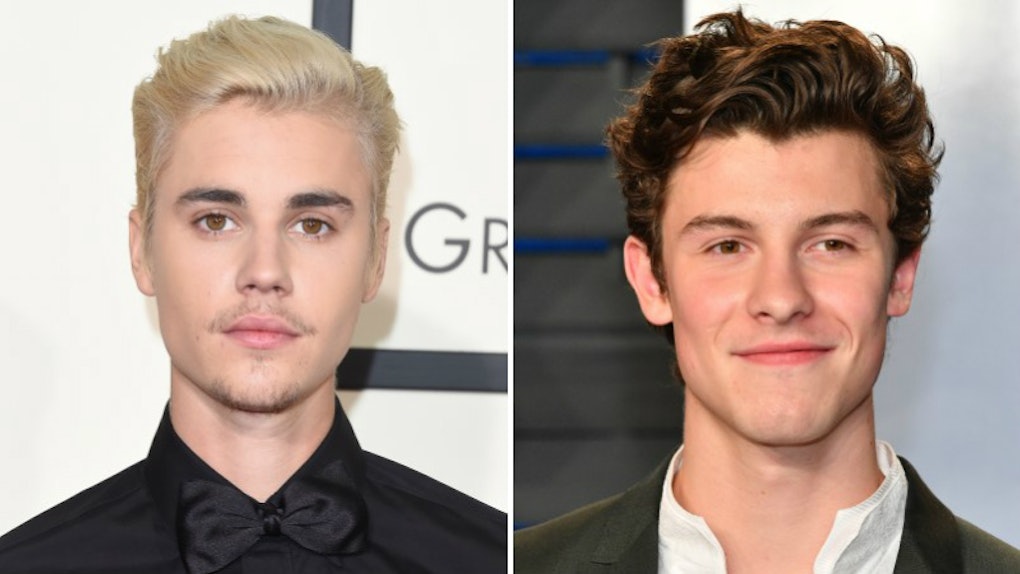 Will Justin Bieber & Shawn Mendes Be At The 2018 VMAs? They're Both Nominated For Awards

The VMAs are fast approaching and there’s a lot of awkwardness that fans expect to ensue... especially since a big chance that Justin Bieber and Shawn Mendes could cross paths at the ceremony. It would be the first public encounter between them since Bieber’s engagement to Hailey Baldwin, who Mendes was reportedly linked to for months prior. With all the potential drama that could unfold, fans have one question on their minds: will Justin Bieber and Shawn Mendes be at the 2018 VMAs?

Well, it’s already been announced that Shawn Mendes will be performing during the live broadcast on top of being nominated for a few awards. So, at the very least, he will be on hand. As far as Bieber is concerned, his presence at the VMAs is a little uncertain. Although he’s nominated alongside DJ Khaled, Chance the Rapper, and Quavo for their collaboration on “No Brainer”, that doesn’t necessarily mean he’ll be there to accept a Moonman if he gets one, especially since he's seemed pretty uninterested in attending award shows over the past few years.

Bieber has been busy the last several weeks wining, dining, and crying with his wife-to-be. So, there hasn’t been any word yet on whether Bieber will be taking time away from his gal to attend the VMAs. I’m betting, if he does attend, he’ll probably be there with Baldwin by his side. And again, that could make for some strange vibes on the red carpet and during the ceremony.

They looked really cozy at the Met Gala:

Both stars later denied any romantic involvement, but that didn’t stop fans from speculating. In an interview with W magazine, which was published in May 2018 (pre-Met Gala), Mendes explained that he and Baldwin were just good friends:

We’re really good friends. It’s funny, she’s such a pro with this type of stuff. I want it to be amazing for her, so I’ve been trying for the past 24 hours to be really silly so that she stays on. I’m happy to walk with her — she’s amazing.

To go back even further: in March 2018 at the iHeart Radio Music Awards, Baldwin also cleared up her relationship with Mendes:

He's a friend of mine and we hang out, so I see why people obviously want to make assumptions. Any guy I hang out with people are like, 'Oh, she must be dating him or something's going on,' but I don't ever really feel like I have to explain myself. It's kind of my business and the other person's business. That's it.

So, those rumors of a romance between Baldwin and Mendes were swirling for quite some time.

To make matters even more awkward, Baldwin deleted pictures with Mendes from her Instagram account right around the time she reunited with Bieber, sparking even more speculation about the nature of her relationship with him (why did she delete if she was just friends with him, hmmm?) and if Bieber's jealousy was what sparked the Insta-cleanse (I hope not).

Anyway, all this could potentially mean a really, really awkward reunion for Bieber, Baldwin, and Mendes. It wasn’t long after the Met Gala that Bieber proposed to Baldwin, so if there was anything romantic between Baldwin and Mendes, then those wounds might still be fresh! I guess everyone will just have to wait and see what happens.

I’m sure everyone involved will be mature enough to keep it moving, though!