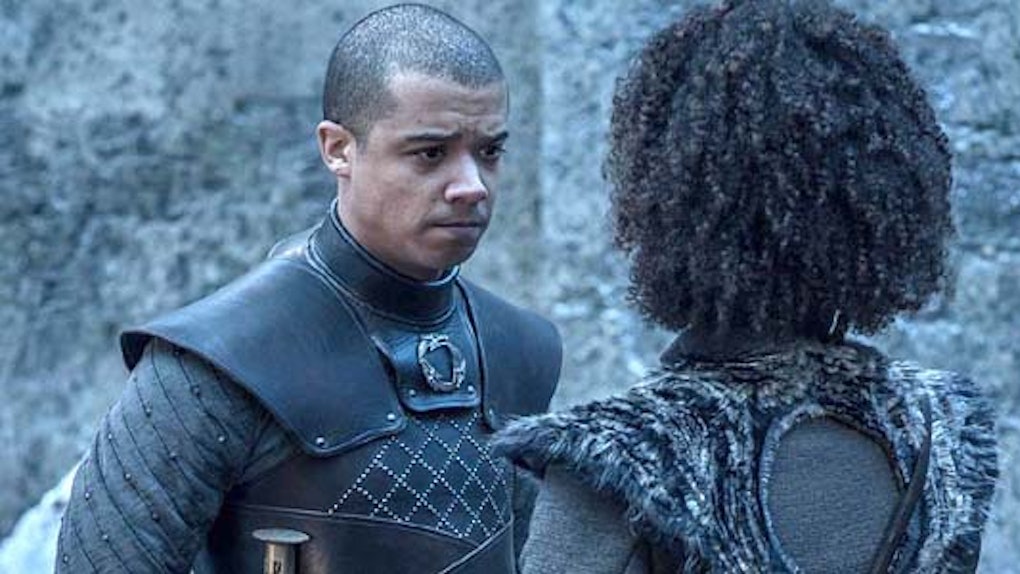 Will Grey Worm Die In 'Game Of Thrones' Season 8 Episode 3? The Battle Of Winterfell Is Coming

The Battle of Winterfell is imminent. The troops have been training. The crypts have been prepared for refugees. The White Walkers are nearby. When Game of Thrones Season 8 Episode 3 airs on Sunday, April 28, audiences should be prepared for a truly epic battle... and a whole lot of bloodshed. There's an almost definite chance that fans will have to say goodbye to some favorite characters. So that brings up the question: Who will survive? After one tense conversation in last week's episode, fans are especially wondering if Grey Worm will die in Game of Thrones Season 8 Episode 3?

Back in Season 3, Daenerys (Emilia Clarke) freed the Unsullied soldiers in Astapor and asked them to serve in her army. Ever since then, Grey Worm (Jacob Anderson) has led all the Unsullied with unwavering dedication and strength. That means that he will be at the front lines when the Unsullied fight alongside the Westerosi and Wilding armies against the Night King's army of the dead. And that means that Grey Worm's chances of survival are not looking great.

To be fair, none of the characters' chances of survival look particularly great. The White Walkers are incredibly difficult to defeat, plus they have the ability to turn humans into additional wights, or zombies, to join them in their fight against the living. To say that the White Walkers have the upper hand is an understatement. Since Grey Worm is leading the army, he'll likely get up close and personal with a whole bunch of White Walkers and risk his life in the process.

There's also the fact that Grey Worm had a prolonged goodbye with his lover and confidante Missandei in the last episode. Grey Worm promised Missandei that he would take her out of Winterfell and back to her home in Essos after the Battle of Winterfell. Any time characters make promises like that, it's never a good sign. In fact, it's so common that there's a TV trope based around it. That last conversation between Grey Worm and Missandei may have been the writers' way of giving the audience one last moment of happiness between the two characters before Grey Worm bites the dust.

On the U.K.'s Sunday Brunch show, Anderson talked about how characters on Game of Thrones are always in danger. He said:

You can never feel never safe on this show. I mean, we could never feel safe. You never know. It doesn't really follow the rules of TV, I mean heroes will [makes throat slash movement].

Game of Thrones is notorious for killing off all of fans' favorite characters. After all, this is the show that ended its first season by killing Ned Stark, the guy everyone thought was the series' main character. So the fact that Grey Worm is a fan-favorite character does not protect him at all from dying very soon.

You can find out Grey Worm's fate when Episode 3 of Game of Thrones' Season 8 airs at 9 P.M. ET on HBO Sunday, April 28.