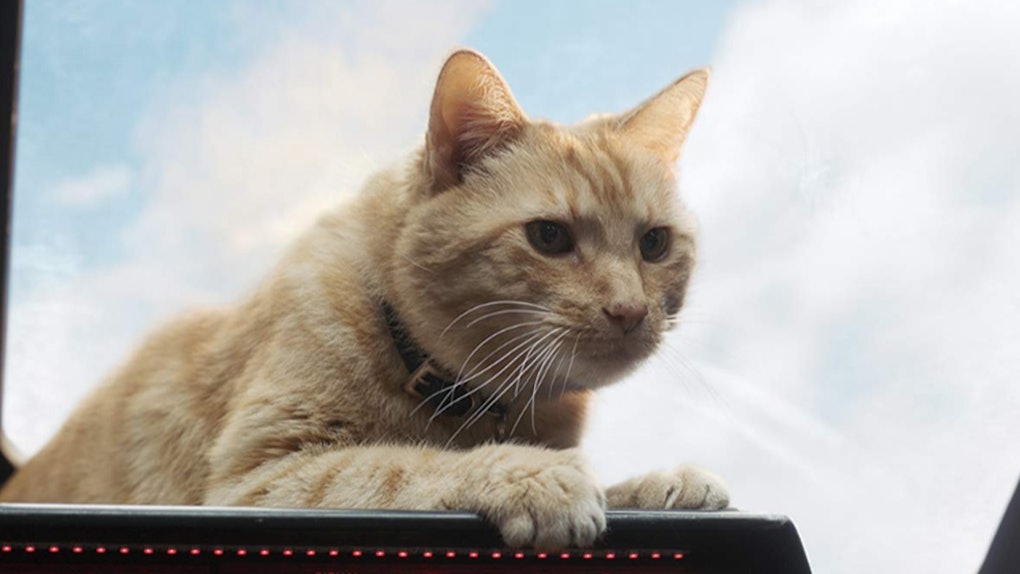 Will Goose Be In 'Avengers: Endgame'? The Feline Friend Fully Stole The Show

As a lifelong cat lady, I was stunned by the Marvel Cinematic Universe's marketing of Captain Marvel. In the comics, Carol Danvers has a cat named Chewie. Word was the cat would be in the new film, rechristened "Goose." Then the trailer happened, with Goose front and center purring up a storm. On the red carpet, there was a live stream of Goose chilling out in his beddy! There were Goose Funko Pops, and the Deluxe Captain Marvel figure comes with a Goose the Cat. Goose was a star of the film. Will Goose be in Avengers: Endgame? I can only hope. Never in my life have I ever been so thoroughly effectively marketed to. Warning: Spoilers for Captain Marvel follow.

Of course, the real secret is Goose isn't a cat.

Goose is a flerken, an alien species that looks the same as an Earthling Felis catus. However, please don't put your face too close to theirs because the interiors are entirely different. At the front end, a giant octopus-like tentacle protrusion unfurls from their maws containing an enormous interior of nested mouths that can swallow up just about anything in the dimensional space inside. At the back end, they lay eggs, 117 at a blow if one isn't careful. No one knows if Nature's Miracle is as effective on flerken as it is on cats, but god I hope so.

See that? Don't do that. Remember, it's all fun and games with the kitty until someone loses an eye.

The fact that Goose reduces Nick Fury into a babbling, cooing cat man just by dint of being fuzzy is only the beginning of how this feline friend steals the film.

Four different cats play Goose. The main actor cat is Reggie, a 12-year-old male, along with Archie, Gonzo, and Rizzo as stand-ins. These four are also helped along by some photorealistic CGI for moments when the cat really can't do what is required, like experience takeoff on a jet plane without wearing a seatbelt.

It's Goose's secret flerken abilities that let him steal the show. He is perfect in battle, attacking enemies left and right. However, in true feline style, he only does so when he feels like it, natch. He's also the perfect vehicle for getting the Tesseract out of the station. After all, once the Infinity Stone is swallowed up by the animal, it's not coming back up until the hairball it's nested in is good and ready to be hacked up.

As for that joke about putting an eye out, as fans can guess, Fury does lose one. However, despite the rumors, it's not from a showdown with the Kree. No, his eye got swiped by Goose after one too many snuggle attempts when the animal wasn't feeling it. Last time Fury trusted someone indeed.

As for if Goose will be back in Avengers: Endgame, I dearly hope so. In the comics, Rocket Raccoon recognizes Chewie's true nature on sight and makes it his mission to take the flerken out. In a depressing world where half the universe is gone, Goose vs. Rocket would be a welcome laugh riot.