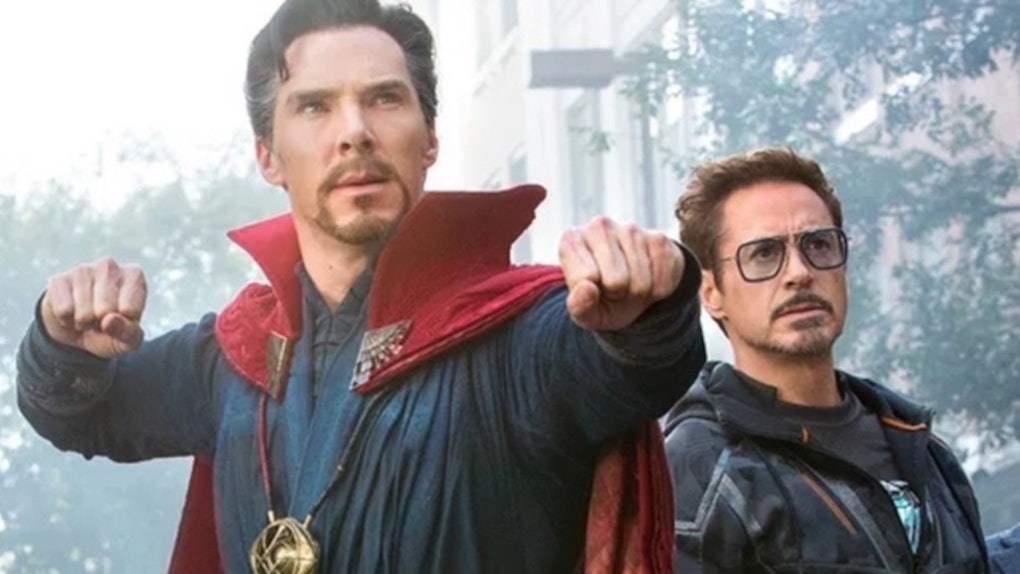 Will Dr. Strange Save The Avengers After 'Infinity War'? He May Know More Than We Think

If you just saw Avengers: Infinity War, then you are probably so shook right now. Like... that ending?! What's going on?! It's hard to make sense out of an ending that major, but there actually might have been a glimmer of clarity hidden in a small statement earlier in the movie. Could Doctor Strange have foreseen that Avengers: Infinity War ending, and purposefully allowed it to happen? And if so, could it actually be a good thing? Let's get into more specifics about this new theory.

Spoiler alert: In case you couldn't already tell, stop reading now if you haven't yet seen Avengers: Infinity War to avoid being spoiled. Okay, so now that the spoiler warning is out of the way, we can talk freely about that insane ending, right? Where did everyone go?! Infinity War ends with half of the Avengers disintegrating into dust after Thanos obtains all six Infinity Stones and then snaps his fingers. His motive from the very beginning was to destroy half of all life in the universe, as a means to protect creatures from the effects of overpopulation, and he appears to have finally accomplished his goal in the end. Just to clarify which heroes are still alive and which ones vanished at the end, here's a quick rundown:

Oh, and the post-credits scene also reveals that S.H.I.E.L.D. operatives Nick Fury and Maria Hill also turned to dust, although Fury was able to send a signal to Captain Marvel before fully disappearing.

With so many heroes seemingly dead, there must be something going on, right? Like, Marvel is not about to kill off some of its most popular characters... especially since Spider-Man and Guardians of the Galaxy sequels are already confirmed for the next couple of years. So, what is going to happen to bring these folks back? Well, there may actually be a glimmer of hope if you listen closely to some of the things that Doctor Strange was saying earlier in the movie.

Think back to when the Star Lord, Drax, Mantis, Iron Man, Spider-Man, and Doctor Strange first met up with each other on Titan. After an initial skirmish, they realized they were actually on the same side and began working on a plan to ambush Thanos when he returned to his home world looking for the Time Stone. While the rest of the group was planning, Doctor Strange used the Time Stone to see into the future, and reported back that out of the millions of possible outcomes of their fight with Thanos, only one resulted in them winning.

Fast forward to the end of the fight, when Thanos has impaled Tony Stark and is preparing to kill him. To save Stark's life, Doctor Strange agrees to hand over the Time Stone. After Thanos takes the stone and leaves, Doctor Strange explains his decision to Stark: "There was no other way."

Hmmm, that might be an intentional choice of words! Most audiences probably assume that Strange is saying that there was no other way to save Tony Stark, but what if what he was really saying is that there was no other way to defeat Thanos? Strange looked into the future and saw the only way that the Avengers could come out on top, and maybe allowing Thanos to complete his mission (perhaps only temporarily) is a part of that sole, victorious future. Unfortunately, Doctor Strange is gone now and can't further clarify if this is the case or not, but I am sure we will find out what's up soon enough.

More like this
This Video Of Disneyland's Marvel's Avengers Campus Is Super
By Cianna Garrison
The 'Zola' Movie Trailer Will Have You Reliving The Iconic Twitter Story
By Dylan Kickham
'He's All That': Premiere Date, Cast, Trailer, Filming News, & More
By Dylan Kickham
Stay up to date