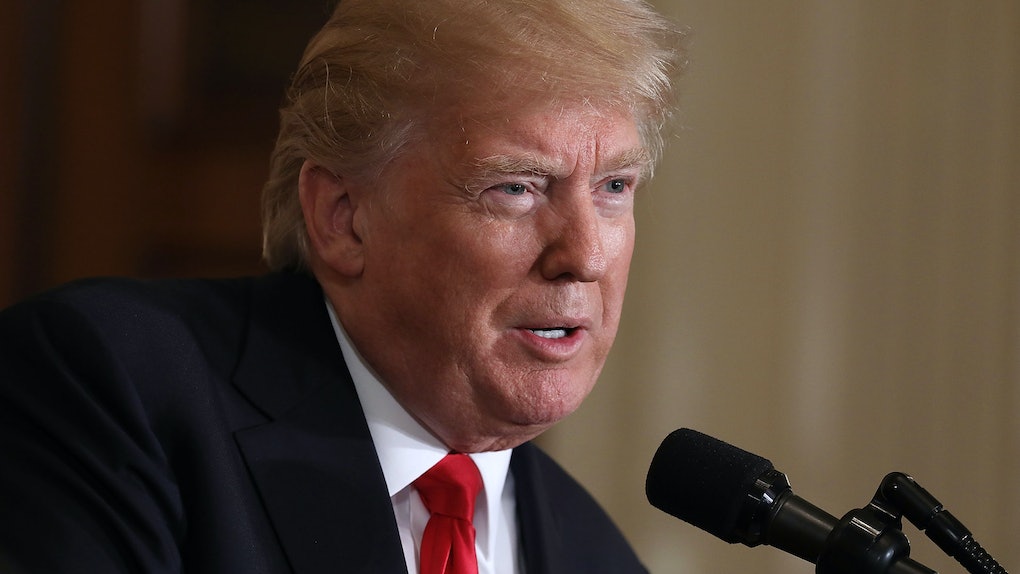 Will Donald Trump Testify In The Russia Investigation? He Says An Interview Is “Unlikely”

Donald Trump has proved once again that he is the king of answering a question without really having to answer a question. So if you're wondering if Donald Trump will testify in the Russia investigation, don't hold your breath for a formal interview. On Jan. 10, President Trump said it's "unlikely" he would be interviewed in the Russia investigation. Why are we not surprised?

During a joint press conference with Norwegian Prime Minister Erna Solberg on Wednesday Jan. 10, Trump was asked by Fox News' John Roberts if he would be willing to take part in a potential interview with special counsel Robert Mueller, who is leading the investigation into Russian election meddling. Roberts asked the president, “Are you open to meeting with him? Would you be willing to meet with him without condition? Or would you demand that a strict set of parameters be placed around any encounter between you and the special counsel?”

Trump refused to commit to an interview, opting instead to consistently deny any collusion with Russia. Finally after a little prodding, he answered the question in the vaguest way possible. He said,

Following the press conference, President Trump took to Twitter (of course) to express his dissatisfaction at the continuous investigation.

"The single greatest Witch Hunt in American history continues. There was no collusion, everybody including the Dems knows there was no collusion, & yet on and on it goes," Trump tweeted Wednesday. "Russia & the world is laughing at the stupidity they are witnessing. Republicans should finally take control!"

This sort of reaction from the President comes as really no surprise. Since questions of Russian involvement in the 2016 election started circling, Trump has been determined to convincing the public that no sorts of collusion ever took place. He has frequently called the investigation a "witch hunt" and tweets out messages that deny any collusion. Nevertheless, prominent figures from the Trump campaign, such as former campaign chair Paul Manafort, his deputy Rick Gates, former campaign foreign policy adviser George Papadopoulos, and former national security adviser Michael Flynn are all facing charges relating to possible connections with the Russian government. Michael Flynn was the last person to be charged after admitting to lying to the FBI about talks with the Russia's ambassador.

Trump's apparent reluctance to sit down with Mueller is quite contradictory to his past statements. On June 9, 2017 Trump spoke at the White House about being "100%" willing" to speak under oath about his conversations with James Comey, the FBI director Trump fired in May 2017. Comey's dismissal stands as just one of the many topics Mueller and his team are reportedly investigating, questioning whether Comey's firing is considered obstruction of justice.

There has been no proof thus far as to whether there was any collusion between Russia and the Trump campaign in the 2016 election. However, many suspect that the discussion of the investigation will last well into 2018. So, maybe prepare yourself, Mr. President. It doesn't look like it's going away.