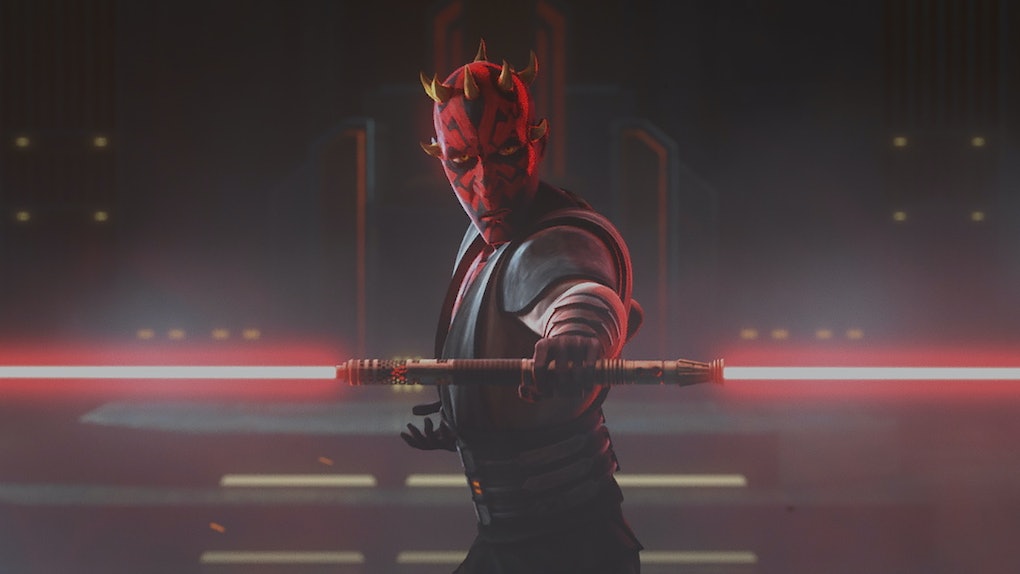 Will Darth Maul Be In 'The Mandalorian' Season 2? The Original Actor Is Hinting He Might

Star Wars: The Clone Wars came to an end on May the Fourth, after a dazzling fight between its long-time protagonist, Ahsoka Tano, and her nemesis, Darth Maul. Though the series finale marked the end of the original story with introduced Tano, fans suspect it may not be the end of her character. Speculation is running wild she'll turn up in The Mandalorian's new season. And she's not the only character the live-action Star Wars series may bring back. Fans are starting to wonder, will Darth Maul be in The Mandalorian Season 2? It would help tie the show tighter to the overall mythos.

Not that The Mandalorian needs to connect more with the already established Star Wars universe. Despite suggestions the stand-alone Star Wars films would not tie to the Skywalker saga, both Rogue One and Solo connected directly with the Episode films, as if Lucasfilm worried fans would not accept them without a direct link. The Mandalorian has proven such connections aren't strictly necessary. The first season stood just fine on the story of Baby Yoda and his Mando.

And yet showrunner David Filoni seems to want to tie his new series back to the animated ones he started with, as The Mandalorian's finale introduced the "Darksaber," a weapon first introduced in The Clone Wars.

While that weapon may be off forging a different path than the one it was on in The Clone Wars (and later Star Wars: Rebels), fans find it hard to believe that where it goes, Ahsoka won't follow. And where Ahoska goes, can Darth Maul be far behind?

When asked about her, Filoni declined to answer if Ahsoka would appear in the new series. But actress Rosario Dawson, who is reportedly playing her, all but confirmed she'd been cast. And now actor Ray Park, who has played the role of Darth Maul since 1999's Star Wars Episode I: The Phantom Menace, has posted a very suggestive comment to his Instagram.

The black-and-white starburst symbol represents Maul. The comment on the photo reads:

THIS IS THE WAY.

That, of course, is the big catchphrase out of The Mandalorian's first season, part of Mando's creed with his fellow caste warriors. Park, as a long-time Star Wars actor, knows the fandom pretty well. It's highly doubtful he would post such a thing without knowing the firestorm it would set off. It's another sign that Ahsoka's arrival is imminent.

There's only one problem, which is that Maul is dead. He died in Star Wars: Rebels, two years before the events of A New Hope. After traveling to Tatooine to find Obi-Wan Kenobi and learning of the existence of Luke Skywalker, Kenobi took Maul out to protect his charge.

But then again, Maul has seemingly died on screen before, and come back. He was chopped in half by Kenobi at the end of The Phantom Menace and left for dead. His return in The Clone Wars was already a retcon because such a great villain couldn't be taken out that quickly. Why not do it again?

The Mandalorian Season 2 is expected to premiere in October of 2020.