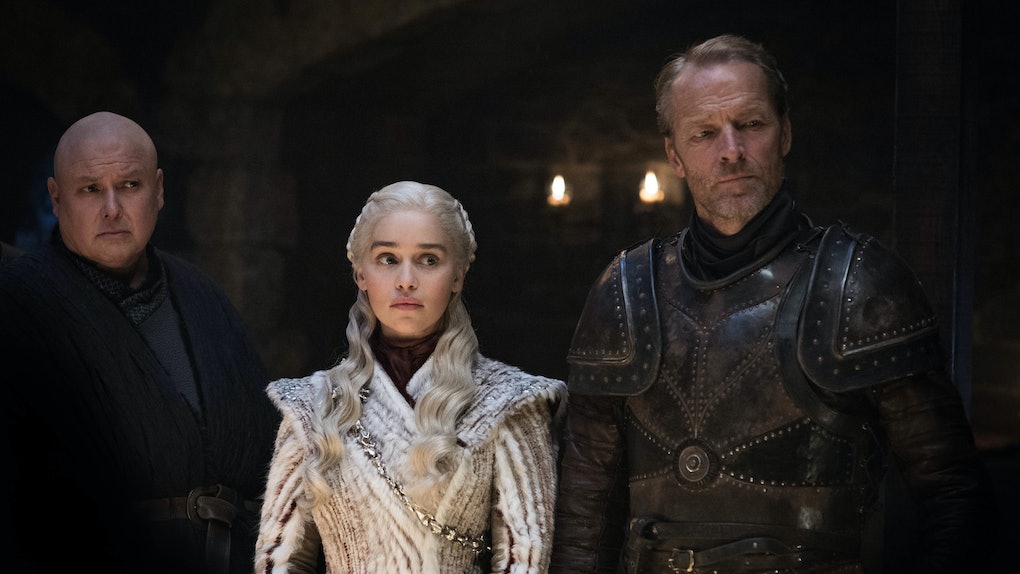 Will Dany Turn Against Jon On 'Game Of Thrones'? She Learned The Truth About Him

Game of Thrones ended last week on the biggest reveal of them all, Jon learning about his history. His response was denial at first, then anger. But even so, viewers could tell he knew it was true. The way the dragons responded to him, the fact that his father never told him who his mother was, that he was resurrected by Melisandre, it all just fit. The problem, of course, is how to break the news to Daenerys. Jon told Dany the truth on Game Of Thrones this evening, and it didn't go well. Will Dany turn again Jon? Fans have a lot of questions. Warning: Spoilers for Game of Thrones Season 8 episode 2 follow.

In an echo of last week's reveal, the show saved the scene where Jon told Daenerys until the very end. Once again, it came down in the crypt, and once again, Jon was standing in front of Lyanna Stark's grave. After spending the entire episode avoiding Dany for fear of blurting this out, Jon's reveal was far smoother than Sam's was last week. (Clearly, he'd rehearsed it in his head.)

Unfortunately, any scenario where Daenerys is thrilled to learn Jon's true parentage was right out the window, as her first response, like his, was disbelief and then anger.

Perhaps the most interesting note was when Daenerys demanded to know who had told Jon such a thing. Jon hesitates just the slightest bit and then says "Bran... and then Sam confirmed it." That's not true. Sam told Jon, and it's notable that Jon recognizes if he tells Daenerys it was Sam, she'll dismiss him as a biased source, angry over the death of his family. He's clearly hoping Bran's weird Three-Eyed Raven schtick will make him seem a more disinterested party.

But Daenerys isn't having it. To be fair, she already had a stare down with Sansa over the fact that Jon bent the knee to her, and that Sansa wants that to be overturned. As she sees it, first Jon's sister refuses to submit, and now his brother is stirring up trouble.

She writes the whole thing off as "your brother and your best friend," as if this is some sort of coup they're manipulating Jon into.

However, that's as far as the two of them get on the subject. Like the scene with Sansa, which was stopped from going south by the arrival of Theon and the Ironborn, Dany's relationship with Jon is saved for the moment by a different interruption, three horn blasts. One blast means friend, two blasts means foe, and three blasts... means White Walkers.

Much like the conversation with Sansa over who rules the North, Daenerys' sudden discovery she has an entire new claimant to the Iron Throne to contend with will have to wait for "afterward." Now, the only thing anyone is dealing with is the arrival of the Army of the Dead and the Night King. Once that's been dealt with, she and Jon can have it out.

Of course, as Bran pointed out, how do we know there is an afterwards? Viewers will find out next week.