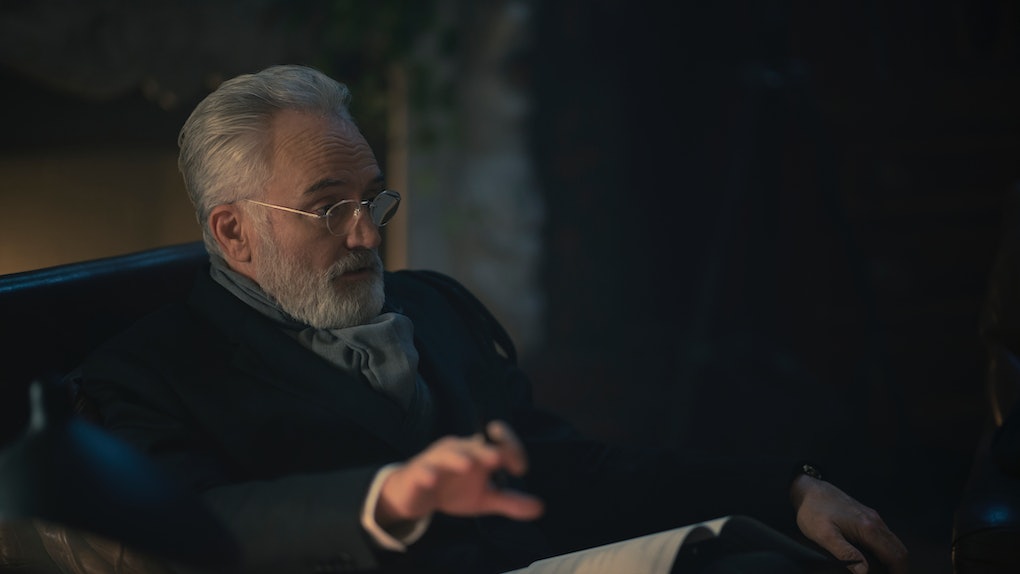 Will Commander Lawrence Remarry On 'The Handmaid's Tale' Season 4? Fans Are Convinced

When The Handmaid's Tale announced it was going ahead with Season 4 it was a bit of a spoiler. Fans knew showrunner Bruce Miller said June finding Hannah and leaving Gilead meant the show was over. A renewal for the next season was as good as a spoiler that neither would happen. That being said, June's return is going to be a shock to Commander Lawrence. The man will have to continue for her sake. But how can he, with Gilead breathing down his neck? Fans are already wondering if Commander Lawrence will get married in The Handmaid's Tale Season 4. It might seem far-fetched, but in terms of a Season 4 plot line... it makes a lot of sense. Warning: Spoilers for The Handmaid's Tale Season 3 follow.

When fans last saw Lawrence, he was waiting in his darkened household as the Guardians went door to door, looking for a child who was reported missing. He did so as a form of sacrifice. He would be caught and questioned so that June and the 52 children she had with her could get out.

But June didn't get out. Instead, she was shot and stuck in the woods all night bleeding. As the episode ended, her Handmaid friends carried her in a makeshift litter of their cloaks to safety.

But where can June go now? She'll be expected to be at Lawrence's, and chances are, that's right where the Martha cleanup brigade will stick her. But that means Lawrence will have to play along as well.

Lawrence does have some slack. He's a grieving old widower, and that buys some deference. But Winslow and Waterford were onto him and others will come after him in their stead. Lawrence doesn't hold the power he used to, and if he wants to be treated like a contender, it means he won't be able to stay single for long.

One Reddit user, XTeena9, sees this as an opportunity for both Lawrence and June.

Could June marry Lawrence? Assuming the game is to stay and find Hannah, and stay protected while doing so... But the question is - could they find a loophole to allow for such a union? Seeing that his wife died, and she might be pregnant with his child, even though handmaids are not worthy of being wives. Maybe he plays a grieving widower card and uses his influence, especially if she's pregnant?

Let us be clear: There's no way this happens. That answer is too pat, too romantic, and simply not the way Gilead works. There's a far more horrifying answer to that question, one the Reddit user is missing.

She's right that Gilead would love for Lawrence to remarry. But it won't be someone of his choosing. It is far more likely Lawrence will be forced, like Nick before him, to marry a true believer Wife, like Eden. Someone who is gung ho about having "her day" in The Ceremony once a month, and get off on holding June down as Lawrence rapes her. She would also give Gilead a pair of eyes inside the household, ready to run and report everything back to them.

In short, Lawrence will likely be forced to remarry. But no one will like the outcome.