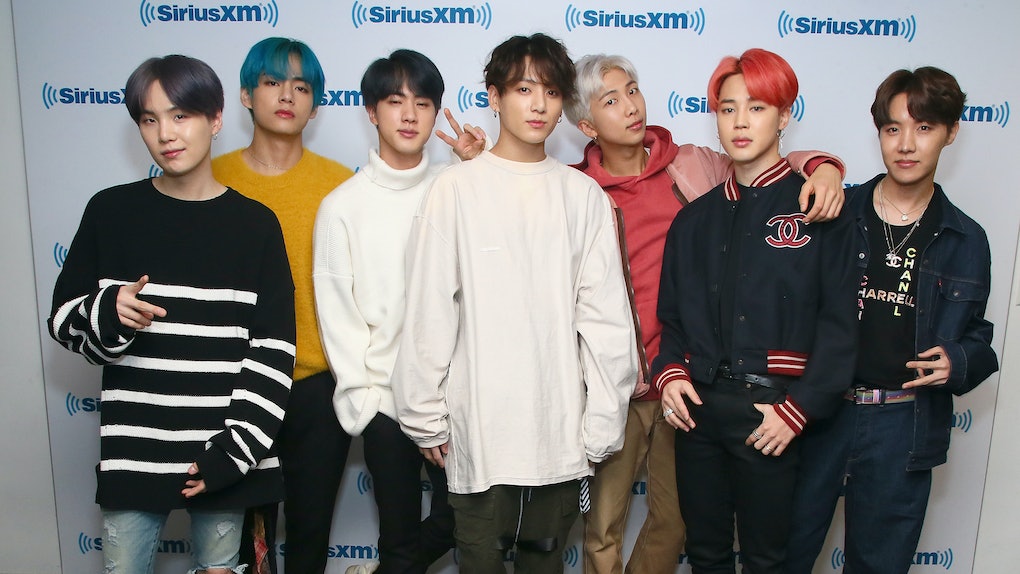 Get ready, BTS ARMY. A new BTS drama series is coming your way. Big Hit Entertainment announced on Wednesday, Aug. 21, that it's starting production on a drama series based on the Bangtan Universe. Woo! Big Hit hopes to debut the show in the "latter half of 2020," but will BTS star in the Bangtan Universe drama series? They already appear in a reality show, star in their own films (albeit, documentaries), and make a bunch of TV show appearances, but, unfortunately for the BTS ARMY, BTS will not be starring in the drama series. But for good reason!

In case anyone is unfamiliar with the Bangtan Universe, though, let's start by breaking down what exactly it is and why it's so exciting to the fandom that it's getting a drama series added to it.

Think of the Bangtan Universe as an alternate reality loosely based on the BTS boys. It's a fictional story where each of the seven members' (which aren't meant to be exact replicas of their BTS counterparts of the same names) storylines connect through the BTS music videos and other BTS content. It's a pretty clever way of taking BTS content and making a fictional story. Time travel and alternate timelines are also involved to add to the ~drama~.

Bangtan Universe books already exist, as do short films, short stories, posters, and album notes, and now, BTS fans can look forward to a drama series being added to that list of content.

In its statement announcing the new series, Big Hit said, "We are currently preparing a drama based on the BTS Universe with a famous Korean production studio. The goal is to launch it in the latter half of 2020.”

Big Hit's announcement also noted that the characters in the Bangtan Universe drama series will be younger than the actual BTS boys, and therein lies the reason RM, Jimin, Jungkook, V, J-Hope, Jin, and Suga won't be starring in the series. It makes sense. It's smart to start the series off with younger characters. Who knows, since this universe incorporates time travel and alternate universes, maybe the BTS boys can make some cameos as the alter egos of the show's characters. The possibilities are endless when you have such an expansive universe. I am super curious who they'll cast, though! The BTS boys are so recognizable, it could be hard to find actors who fit the part!

The show will hopefully be able to keep to its goal of a late 2020 debut, so fans don't have to wait too long for this show. I wonder how they'll make the show available to global audiences, though. Will it be exclusively on YouTube? Just Weverse? It would be huge if Big Hit could snag a Netflix deal out of this! Just imagine all the streaming the ARMY would do if that were a thing. Hey, Netflix... this isn't my worst idea! If this ends up happening, I call dibs on all the money since, you know, we've just established that this was my idea.

More like this
The 'Glee' Cast's Tribute To Naya Rivera At The 2021 GLAAD Media Awards Was So Moving
By Abby Monteil
Here's Every BTS Video That's In The Bangtan Universe, So You Can Catch Up
By Michele Mendez
'Selena: The Series' Part 2: Netflix Release Date, Trailer, Cast, & More News
By Dylan Kickham
Stay up to date