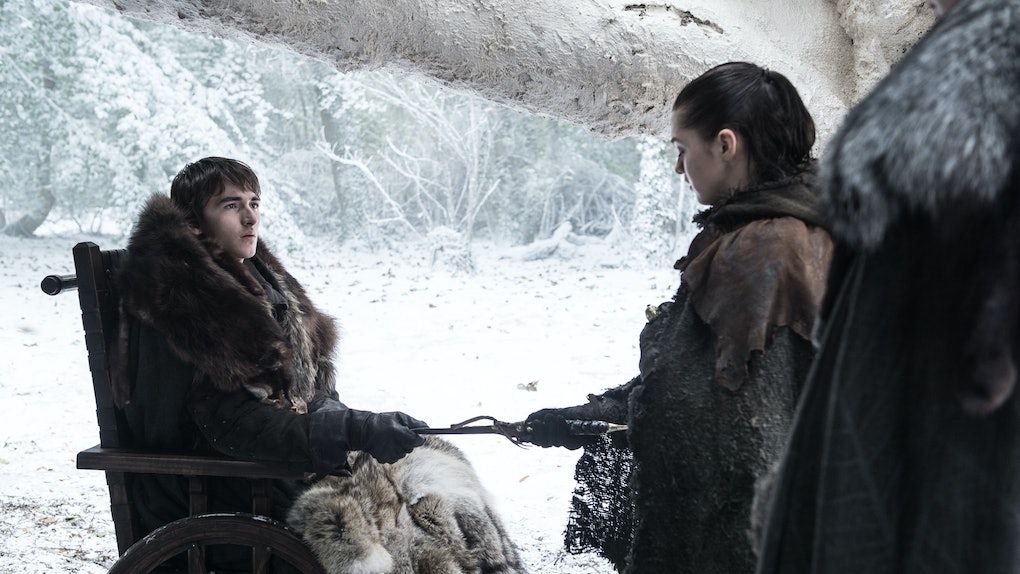 Will Bran Kill The Night King & Take His Place On 'GOT'? This Season 8 Theory Seems Legit

Game of Thrones Season 8 will supposedly have a bittersweet ending. The problem is, no one in the fandom can agree what it means. For some, it suggests a happy ending, tinged by regret of some sort: Jon and Dany get married, but everyone around them is dead. For some, it implies no happy ending, but a middle ground where survivors keep on living. But for the hardcore, it suggests to win, there must be a massive sacrifice. Winning, of course, means killing the Night King. Will Bran kill the Night King? And if so, how might he sacrifice to do it?

There's a long-standing theory Bran and the Night King are one and the same. Bran's status as the Three-Eyed Raven has given a lot of fans pause as they try to figure out how this works in relation to everyone else. With Hodor, viewers learned he can not only see through time but affect it, accidentally creating a paradox.

This leads to theories Bran has created other, as yet unknown paradoxes. One suggestion is Bran drove the Mad King mad trying to change history. Another is his visit back in time to the creation of the Night King is the beginning of a time paradox, and Bran will eventually go back and be turned into the Night King when he tries to stop the Children from making this fatal mistake.

But there's a third theory as well. As fans may have realized, the Night King is immortal. It's the only explanation for how he survived the first Long Night until now. One cannot kill an immortal being. The best way to take the Night King down is to kill him and take his place. Most guess this would be Jon Snow or Daenerys Targaryen. But neither of them are connected to the Night King on a higher plane. They're just puny humans who are fighting him.

Bran, on the other hand, has connected with the Night King. The two of them met in the Vision World of the Greenseers, where the Night King not only looked upon Bran but touched him.

Bran's ability to see through time is useful in revealing to Jon who his parents really were and his birthright. But it also means when the Night King comes, while Jon leads an army of the living in this world, Bran can lead an assault upon the Night King on another plane. This was the basis for the theory Bran might be the third dragon "head," his greenseer sight necessary to win the fight.

What if Bran's fight with the Night King is to take him down through greenseer magic while Jon Snow fights the Army of the Dead? The Night King dies, Bran assumes his mantle, taking his place, disappearing for another 10,000 years. The Night King was rumored to be a Stark. Could it be Bran's destiny to become the next Stark Night King?

It's a persuasive argument. Fans will have to wait and see if it's right when Game of Thrones Season 8 premieres on HBO in the first half of 2019.

More like this
'House Of The Dragon': 'GOT' Spinoff Cast, Release Date, Filming News, & More
By Ani Bundel
The 'Cruel Summer' Season 1, Episode 5 Promo May Hint At That Mirror Theory
By Rachel Varina
This Reddit Theory About June In 'The Handmaid's Tale' Season 4 Is So Creepy
By Ani Bundel
Stay up to date