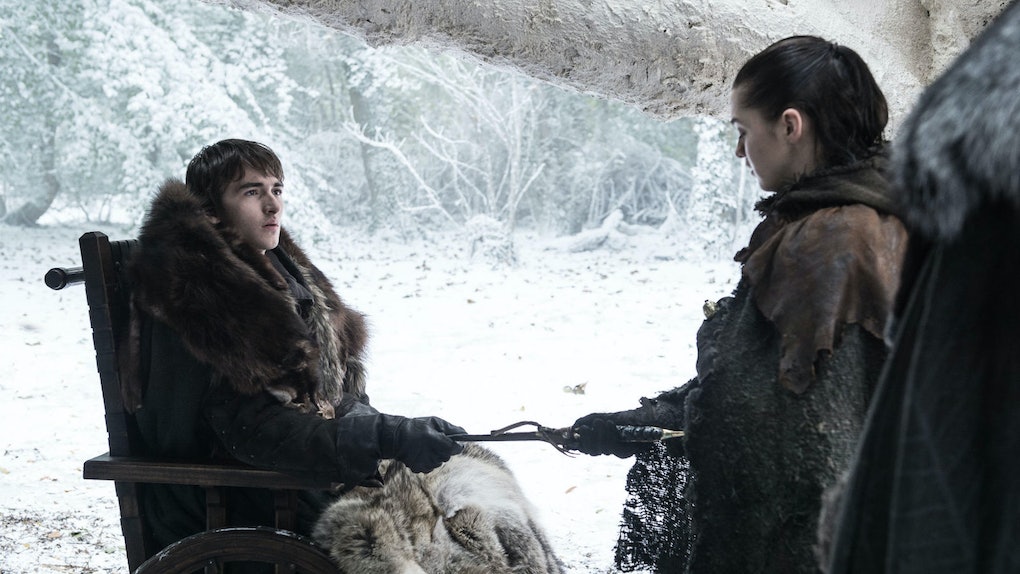 Will Bran Die In 'Game Of Thrones' Season 8 Episode 3? His Connection To The Night King Is Real

It seems very clear that there will be a lot of death on next week's new episode of Game of Thrones, and Sunday night's latest episode has fans particularly worried about one main character. Bran Stark has definitely become a much bigger thorn in the Night King's side since he developed his sightseeing powers as the Three Eyed Raven, and his revelation in this week's new episode confirms that the Night King will be gunning for Bran more than anyone else in the upcoming battle. So, will Bran die in Game of Thrones Season 8 Episode 3? The show is famous for killing off main characters, and this may just be Bran's final moment.

Spoiler alert: This post contains spoilers from Episode 2 of Game of Thrones Season 8. This week's new episode was focused on everyone living out their final day in Winterfell before the Night King's army descends on them in next week's episode. Of course, a big part of that was nailing down the final plans for how this group of humans might actually stand a chance against an army of superpowered ice zombies, and soon, Bran reveals that he needs to be at the center of the Winterfell army's strategy.

Bran informs everyone that the Night King is able to track Bran through a mark on his body, explaining that the White Walker leader has actually been after him specifically this whole time. The reason for this, as Bran explains, is that the Night King wants to create an unending night that completely wipes away every single aspect of Westeros, which is impossible with Bran still alive since his Three Eyed Raven powers allow him to keep all the memories and stories of Westeros alive forever.

In true brotherly fashion, Jon Snow's response is to hide Bran away in the crypts to try to protect him from the Night King, but Bran insists that the Winterfell army instead use him as bait to lure the Night King into a trap. It is not clear exactly what kind of trap this could be, but Bran will definitely be at the center of it and it is almost definitely confirmed that we will see Bran come face to face with the Night King in next week's episode, which is sure to be a major scene.

While Bran Stark's face-off with the Night King may explain a whole lot about who the Night King really is and possibly even reveal how he can be stopped, it may also come at the price of Bran's life. Bran is definitely going to be the character in the most peril going into next week's episode, so fans should start preparing for the possibility that he may meet his end.

That said, Bran's potentially lethal meeting with the Night King should finally shed some light on the endless list of theories about how the two characters are connected. Fans have even developed theories claiming Bran actually is the Night King. While everybody has their own theories, the one thing that fans do agree on is that the Night King and Bran are somehow connected, and figuring out that connection could be the key to explaining the whole show. Hopefully, we get some real clarity when Bran and the Night King meet up in Season 8 Episode 3.