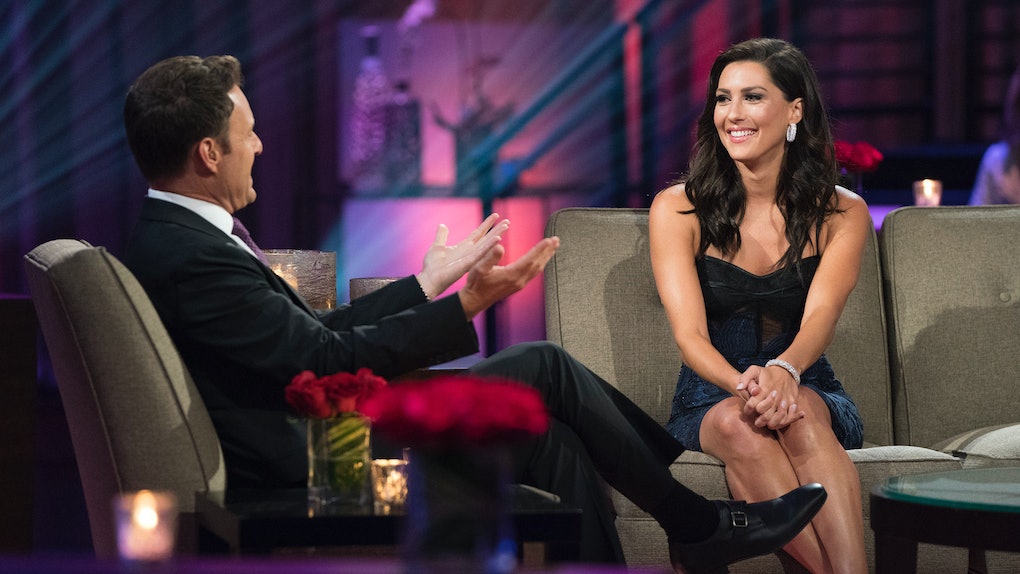 Will Becca Be On 'Dancing With The Stars'? ABC "Absolutely Loves Becca"

Behind every Bachelor Nation lead is a person secretly curious about all of the opportunities to come from being at the helm of the franchise. That desire usually becomes clear when a former lead is announced as a Dancing with the Stars contestant, but this typically isn't the case for Bachelorettes. The starring ladies rarely appear on the competition show, but will Becca Kufrin be on Dancing with the Stars? ABC executive Rob Mills is open to working with her again.

In an interview with Variety, Mills, ABC's SVP of alternative series, specials, and late-night programming, talked about Becca and fiancé Garrett Yrigoyen's induction into the Bachelor Nation family. Whether or not past contestants have emerged from the franchise engaged, ABC has featured plenty Bachelor faces on spinoff shows, Dancing with the Stars, and Family Feud. It's only a matter of time before Becca and Garrett appear on ABC on another series, and when asked if the network would like Becca to compete on Dancing with the Stars, Mills said:

Now that the season is over, we like keeping these people in the family. We love when they do DWTS or a one-off on a game show, so obviously we want to keep her somewhere in the family, but we’re just not sure where. But we absolutely love Becca.

Bachelor leads have a history of appearing on ABC's dance competition show. Although most recent Bachelor Arie Luyendyk probably figured that a Dancing with the Stars spot wasn't the best move for him, his predecessors Jake Pavelka, Nick Viall, Chris Soules, and Sean Lowe all embraced their inner Footloose vibes after their Bachelor seasons concluded. The results were as cringe-tastic as you'd expect, and although Sean and his then-fiancée Catherine Giudici married soon after the competition, he has since admitted that doing the show was a mistake. Such a heavy time commitment so early on in a new relationship hasn't boded well for the other dancing Bachelors, who broke up with their Final Rose picks soon after competing for the Mirrorball trophy.

Meanwhile, only original Bachelorette Trista Sutter and onetime Final Rose pick Melissa Rycroft (Jason Mesnick's fiancée before he changed his mind and wanted to be with his runner-up) have competed on Dancing with the Stars, and there are rumors about why so few women from the franchise have done the show. Of course, there's always the idea that Bachelorettes value their private time with their new fiancés more, but there is a more complex possibility explaining this absence.

In 2017, Season 11 Bachelorette Kaitlyn Bristowe, a former dance instructor, accused Bachelor creator Mike Fleiss for allegedly banning her from competing on the show. Kaitlyn claimed that she was offered a spot on Dancing with the Stars, but Fleiss told her that she wasn't allowed to compete. In a statement, Kaitlyn said that Fleiss believed her dancing would be "bad for his brand." Although Fleiss tweeted that she'd have his support as a Dancing with the Stars contestant, Kaitlyn wrote:

I believe men and women should be afforded the same opportunities. That has not been the case with the Bachelorettes and the Bachelors...I told Mike [dancing] was my passion. I was told [fiancé] Shawn [Booth] should be my only passion...My hope in speaking out is that future Bachelorettes are given the same opportunity as Bachelors. Whether it be a wedding, to dance, or another show.

The Bachelor boss not exactly supporting the Bachelorettes' post-show opportunities is definitely something to think about, but maybe Becca will start a new trend if dancing is what she wants to do. Then again, she's just excited to take a trip to Costco with Garrett, so Becca might not even mind if Fleiss isn't crazy about her doing Dancing with the Stars. But ABC still adores her, so if she does end up on the dance floor, I'm so here to watch her experience.